Breitbart News ranked #19 among Facebook’s biggest publishers for the month of July on total engagement, just one slot behind CNN, according to recently released rankings by industry-leading social media analytics giant NewsWhip.

Breitbart’s 3,435,105 comments landed it at #6 among Facebook publishers for most number of total comments, a total that did not include Breitbart’s 1,200,000 on-site comments over the same period. Huffington Post, Fox News, BuzzFeed, NBC, and Daily Mail occupied the top five slots for most Facebook comments. 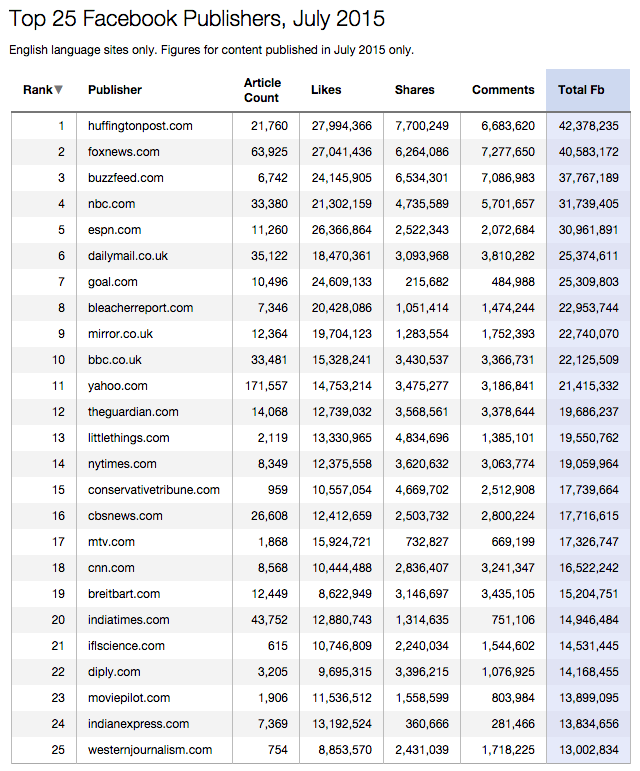 “Conservative news has long been a strong driver of engagement on Facebook,” reports NewsWhip Head of Communications Liam Corcoran. “We predicted a lucrative few months ahead for political sites on Facebook in June, and it seems as though they’re already off to a strong start.”

“I’ve spoken for years about the importance of engaging your family and friends on the political and cultural topics of the day, even if it’s uncomfortable at times, and Facebook makes it easier than ever,” added Breitbart News Editor in Chief Alex Marlow. “It is the ‘virtual dinner table’ of the 21st century and a place where hearts and minds are won. It’s thrilling to know that Breitbart News content is a part of so many of these conversations.”