CNBC anchor Carl Quintanilla, one of the moderators of this week’s GOP debate, offered some insight into China’s notorious one-child policy Thursday. Quintanilla published a graph of China’s declining birth rate in the 1990s and wrote, “One thing about China’s one-child policy: it worked.”

Quintanilla may not have been endorsing the one-child policy, but he didn’t offer any overt or even implied criticism of it either. In fact, saying “it worked” sounds a lot like he is suggesting it was a success.

The problem, of course, is that the one-child policy, which China converted to a two-child policy this week, was a brutal, harrowing invasion of the human rights of millions of families under the guise of national policy. Since 1979, an estimated 13 million women a year underwent abortions, many of them forced to do so by government officials. Another 200 million women were sterilized under the same policy.

These practices mostly went unseen and unnoticed in the era before social media and digital cameras. In 2012, the world got to see the result of this policy on one young woman when her family members posted an image of her lying next to her dead baby after she’d been forced to have an abortion.

The young woman, Feng Jianmei, already had one child; so after she became pregnant again, family planning officials called her house to persuade her to have an abortion. When that failed, they showed up at her home and spent hours pressuring her for consent. Jianmei slipped out of the house but was followed by a group of 15 officials to her aunt’s house. After briefly escaping and hiding under the bed of a relative, Jianmei was found by the government officials and was reportedly carried out by four men.

Meanwhile, family planning officials were negotiating with Jianmei’s husband. At first they demanded $15,000, but then dropped the birth planning fee to around $5,000. In any case, it was more than he could raise. Finally, Jianmei was forced to give consent by having her thumbprint placed on a form and was injected with a drug that killed her baby. Her family posted this image, which went viral, of Jianmei with her dead daughter. For criticizing the government, government officials led a march denouncing her family as “traitors,” and her husband was beaten. 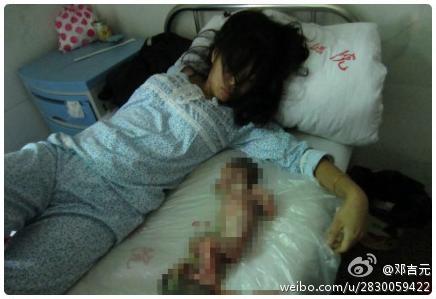 And that nightmare is not the only kind of suffering caused by the policy. Those who dared to violate the policy had to keep their secret children out of sight of government officials. As the Washington Post reported last month, the consequences of getting caught were severe:

“It was terrifying if you had an over-quota child,” my father says now. “If the government knew, you would be in trouble. People would come to your house, remove all your grains and do anything they could to you. And sometimes, they’d destroy your house.”

My mother recalls: “Even for a new house, they’d get on the roof, rip it apart and bulldoze the entire house. We had to keep moving and hiding. It was really painful for us. We knew it wasn’t a long-term solution.”

The one-child policy was a decades long campaign of forced abortion, extortion, sterilization, and terror that traumatized hundreds of millions of people. Saying “it worked” seems like an odd way to sum up such a policy.