Matt Drudge of The Drudge Report teased the political and media establishment with a graphic seemingly vindicating his online polls after Donald Trump’s strong victory in the South Carolina presidential primary.

“OMG!” Drudge wrote on Twitter, captioning a graphic of the current delegate tally in the Republican presidential primary. “Looks like the latest DRUDGE REPORT poll results! How can that be?” He punctuated the message with a winking kiss emoji.

The graphic shows Donald Trump leading with 61 delegates, then Ted Cruz with eleven, Marco Rubio with ten, John Kasich with five, and Ben Carson with three.

For comparison, the latest Drudge poll after a debate in South Carolina showed these results: 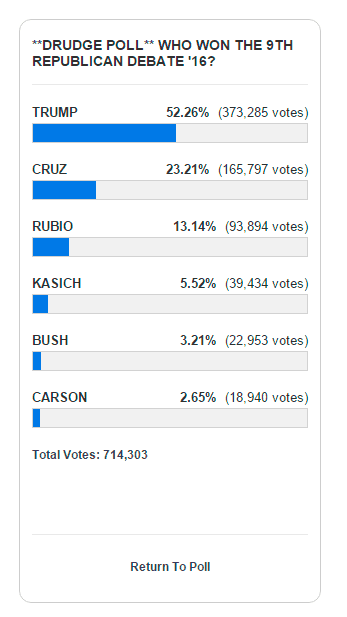 And Drudge’s monster poll at the end of January, not linked to any debate–which gained nearly 1.5 million votes:

Drudge’s polls are not scientific in their methodology, but they do have a finger on the pulse of whose camp is most enthusiastic. In a year where conventional knowledge has predicted little, these snapshots of how the online world–trolls, spammers, and all–sees each candidate may end up surprisingly prescient. As Jimmy LaSalvia wrote in Salon before the Iowa caucus:

Again, the Drudge polls are immediate and unscientific. Anyone can participate. They’re not weighted for demographic balance, one person might vote multiple times from different computers, or their phone. It’s a snapshot of one piece of the conservative base. They might remind some of an online version of the 1936 survey that changed polling forever: the Literary Digest calling the presidential election for Alf Landon over Franklin Roosevelt, and getting it horribly wrong because their self-selected audience did not accurately reflect the country.

But this isn’t about who would win in November between Trump and Hillary. An online poll on a site beloved by conservatives would never accurately reflect that. But as a measure of fervor within a primary, it captures something real about the passion and the intensity of Trump’s support among the base.

@mikerotondo86 Trump and his low information supporters like you thought the Drudge poll where you vote as many times as you like was real:)

The drudge poll is not scientific. This Google/IJ.com poll is. And it shows Carly won http://t.co/21shXmWaCg

Trump’s evidence that he “won” debate: Drudge poll! NYT wrote about me on A1! WaPo too!

Watch the Drudge poll tonight. Spoiler: the Trumpbilles will produce the same results they do every time.

"Those polls are losers, total, complete, absolute losers. I won the Drudge poll. I won all the online polls and the Twittersphere!"

Trumpdiction: "This debate was totally unfair, but the Drudge Poll scientifically proves that I won. I'm the best, really."

Also, that really incredible Drudge Poll, the best poll ever except all you losers don't know it https://t.co/yOy7gb1LgT

Has Trump won the Drudge Poll yet?

If only all of the Drudge poll voters were so sparing. https://t.co/prlb157f9N

@HouseCracka @MarkSteynOnline which part? btw u know that Drudge poll is not real. Why do u push that lie to your low information followers?

@whillxx @MacStipanovich Have you looked at the numbers, or just the Drudge "poll"?

Has Trump won the Drudge poll yet?

The drudge poll, which is not based on any science at all and is meaningless, is up now https://t.co/yOdC9QuFoB

Trump is having a terrible night. But don't worry…he's ALREADY WON THE DRUDGE POLL.

According to Drudge poll, Trump won Iowa by 80 points. https://t.co/EatxLNgC8Y

Right? Then again, we have an election where a candidate unselfconsciously cites the Drudge poll. https://t.co/UGDXlTHxRV

Waiting on the Drudge Poll. https://t.co/Tni0MDPpHw

@Britinnv @blackrepublican stop embarrassing yourself. The Drudge poll is not a poll.

Drudge sent only one other tweet the same night, deleting all of the account’s past messages–as is his custom. He remarked in this first tweet: “Clinton vs. Trump is the race America deserves. EPIC. WILD. NASTY. FUN.”

Both tweets are archived here and here.