In 2012 the United Kingdom House of Commons Culture Media and Sport Committee, concluded that Rupert Murdoch was “not a fit person to exercise the stewardship of a major international company” – namely his media conglomerates News International and News Corporation.

The extensive report came to this conclusion on the basis that he “turned a blind eye and exhibited wilful blindness to [criminality] going on in his companies and publications”. Four Committee members disagreed. One is now the deputy leader of the House of Commons despite having only been a Member of Parliament since 2010. Another resigned her seat and is now working on launching “libertarian” website with Mr. Murdoch’s News Corp.

Although Mr Murdoch has always denied that he knew anything about wrongdoing of journalists and others in his companies, the Committee brutally put him down with this passage:

“The notion that—given all that had gone on, right back to evidence given over payments to the police to our predecessor Committee in 2003—a hands-on proprietor like Rupert Murdoch had no inkling that wrongdoing and questionable practice was not widespread at the News of the World is simply not credible.”

As a result, Mr. Murdoch’s company was unable to complete its takeover bid for the satellite television network BSkyB and lost a number of other contracts in the UK and abroad because of a lack of confidence in the integrity of the company.

A further example of this culture and Rupert Murdoch and his management’s failure to focus on serious wrongdoing within the organisation was his response to the Committee’s questions about attempts by Neville Thurlbeck, then chief reporter of the News of the World, to blackmail two of the women involved in the newspaper’s controversial exposure of racing mogul Max Mosley’s private life.

The committee of MPs began its inquiry in July 2011 in the wake of fresh revelations about the extent of hacking at the tabloid newspaper, with reported victims including the murdered schoolgirl Milly Dowler, and the families of victims of the 7/7 London terror bombings.

Around 6,000 possible victims have been identified, and the police have so far made a number of arrests in connection with an investigation reopened in January 2011. The matter got so out of hand that Mr. Murdoch was forced to issue an humiliating apology for the conduct of his employees.

It is believed that News Corp has paid millions of pounds in damages to celebrities, politicians and members of the public having admitted civil liability for breaches of privacy. 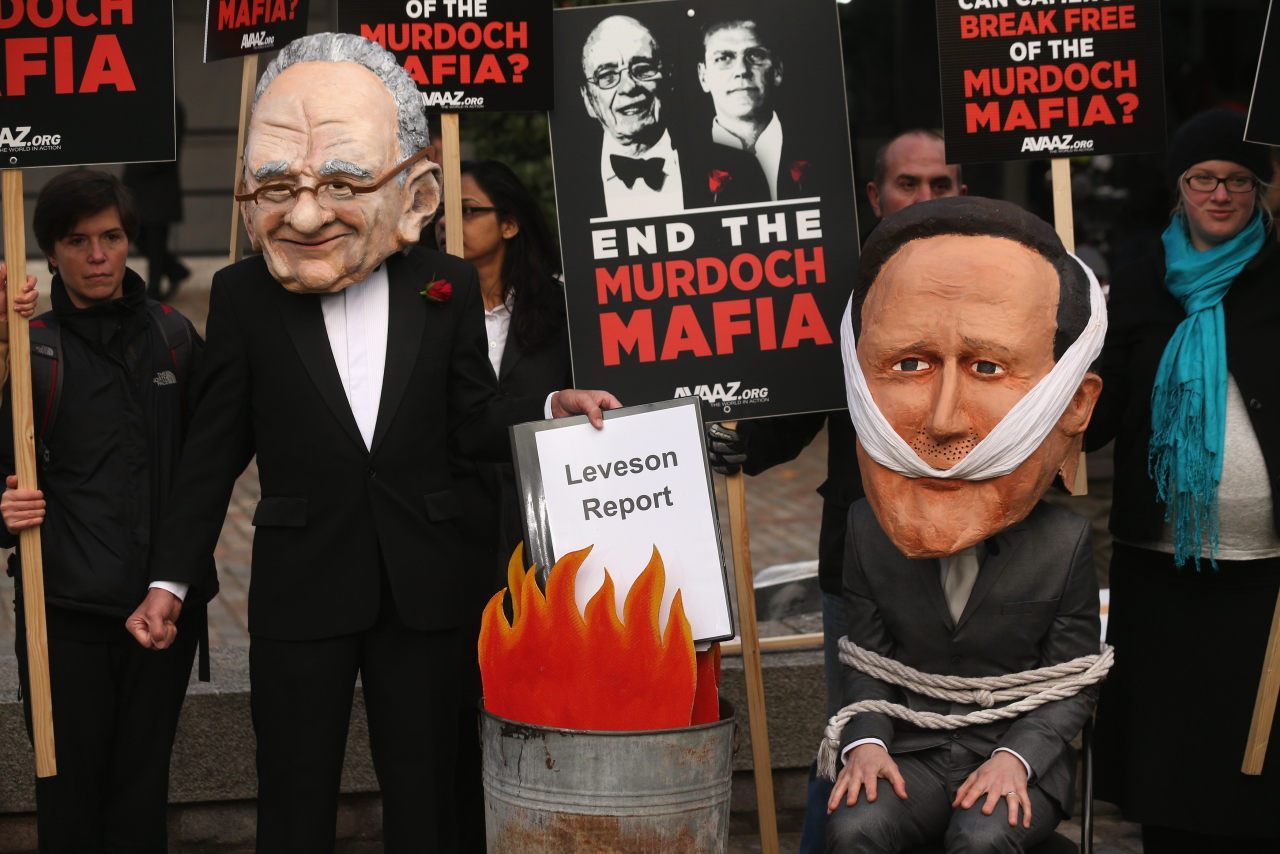 LONDON, ENGLAND – NOVEMBER 29: A protest group campaigning against the political dominance of Rupert Murdoch stage a mock burning of a copy of the Leveson Report outside the Queen Elizabeth II centre on November 29, 2012 in London, England. (Photo by Oli Scarff/Getty Images)

The scandal reached its peak when Mr. Murdoch was forced to close the publication News of the World after 168 years in print as a result of many very large companies, including Ford and General Motors pulling their advertising.

Criminal charges were brought against many of News Corp staff in the UK, including Murdoch’s key lieutenant Rebekah Brooks and a former editor of the News of The World, Andy Coulson, who progressed so far as to have been appointed Prime Minister David Cameron’s director of communications in 2010.

Ms. Brooks’s legal fees, estimated at more than £5m, were partly paid for with the £16.1m severance that she secured after resigning as chief executive of News International. She was found not guilty on the grounds of incompetence, claiming she had no idea that this was going on right under her nose. Andy Coulson was found guilty of a charge of conspiracy to intercept voicemails.