The Huffington Post is telling its readers not to panic as the bottom drops out of Hillary Clinton’s campaign, just days before Americans cast their final votes in the 2016 presidential election.

“Eat the Press,” a HuffPost blog about politics, media, and culture, released a podcast Friday where hosts Jason Linkins, Zach Carter, and Arthur Delaney plus HuffPost Pollster reporter Ariel Edwards-Levy assure their audience that Clinton is still favored to win Tuesday’s election — despite polls turning towards Donald Trump in several battleground states and the threat of a constitutional crisis should Clinton take office. The site’s home page is promoting the podcast with the headline “Keep Calm And Just Look At The Polling Aggregate.”

Unseen in the writeup of the podcast: the actual polling aggregate. Clinton is up by 2.6 points nationally — less than most polls’ margins of error. 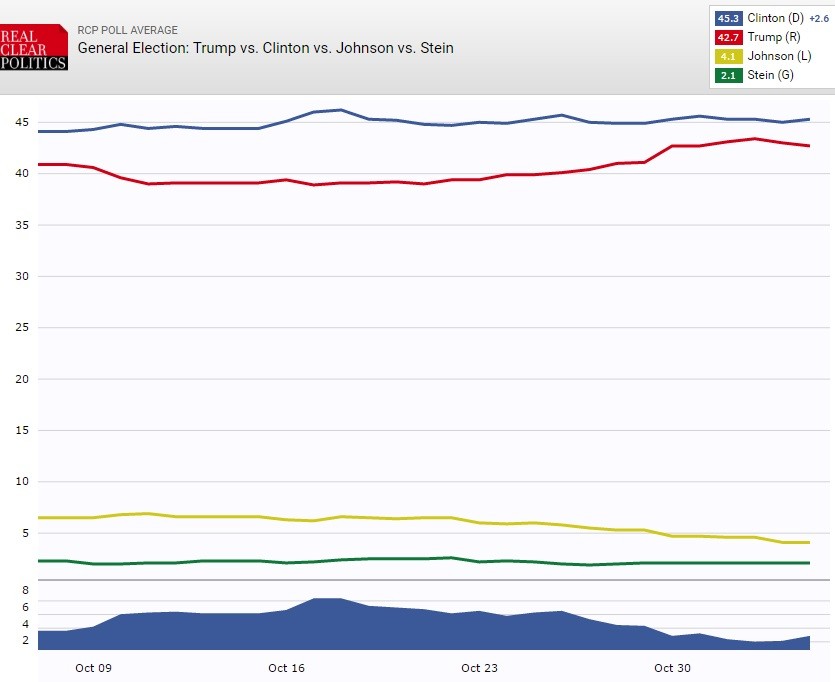 And, at the same time, HuffPo’s top story is not quite following the “keep calm” advice; Senior Polling Editor Natalie Jackson frets about New Hampshire, where Trump has just pulled ahead in the Real Clear Politics polling average. While Jackson’s headline shows a more measured caution — “New Hampshire Is Waffling Between Donald Trump And Hillary Clinton” — the home page editors have declared the race a “NAILBITER.”

Clinton has taken a beating in the polls since FBI Director James Comey revealed last Friday that the bureau re-opened its investigation into her handling of classified information while Secretary of State. FBI agents reportedly found emails relevant to the investigation while investigating former Congressman Anthony Weiner’s alleged sexting with an underage girl. A laptop that Weiner reportedly shared with his wife Huma Abedin — a longtime aide to Clinton and her deputy chief of staff at the State Department — may contain more work emails that Clinton failed to turn over to State, Congress (after a subpoena), and the FBI.

The brutal news cycle has prompted several moderate and even progressive pundits to abandon Clinton. John Kass, a columnist for the Chicago Tribune, called on Democrats to “demand that Mrs. Clinton step down, immediately, and let her vice presidential nominee, Sen. Tim Kaine of Virginia, stand in her place.” César Vargas, a filmmaker and activist, used his own blogging platform at the Huffington Post to recant his endorsement of Clinton.