Americans are sharply divided along partisan lines when it comes to how high a priority fighting climate change should be for the government, according to a survey published Thursday by the Pew Research Center.

Of the 18 policy issues Pew asked about, by far the deepest partisan divide emerges over climate change, with self-described Democrats and Republicans at opposite ends of the spectrum.

Combating climate change was the rock-bottom concern for Republicans, with only 21 percent saying it should be a top priority for President Trump and Congress, while for Democrats it was among the most important issues, with 78 percent saying it was a top policy concern.

Unsurprisingly, the second widest policy divide after climate change is the related issue of the environment, with 85 percent of Democrats but just 39 percent of Republicans rating it as a key issue to be addressed by public policy.

The next most significant partisan bone of contention is over “gun policy,” with 66 percent of Democrats and only 25 percent of Republicans deeming the matter a key issue for policy makers.

On a number of other issues, such as Social Security, crime, drug addiction, and jobs, Republicans and Democrats registered near perfect agreement, aligning closely with one another when evaluating the importance of each. 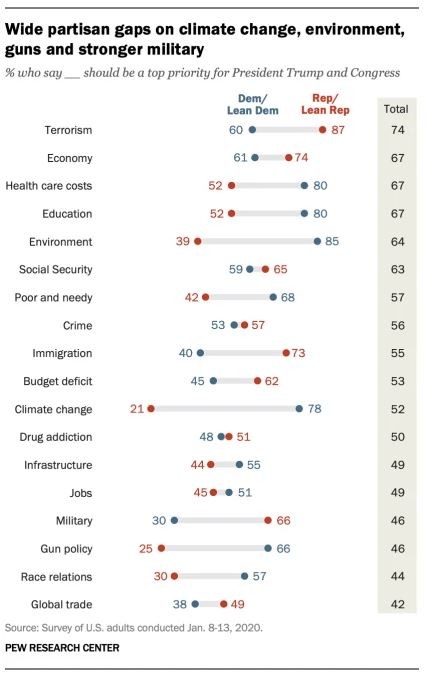 On the contrary, the highest policy priority for Republicans (87 percent) is defending the country from terrorist attacks, followed by strengthening the economy (74 percent), and then tackling the issue of immigration (73 percent).