FORSYTH, Georgia — Sen.-elect Cynthia Lummis (R-WY) campaigned Monday afternoon as part of a tour to promote voting for Republicans in the Georgia Senate runoff election and talked with Breitbart News about how she sees Democrats threatening fundamental rights like the Second Amendment.

Lummis, after appearing at Meadows Gun Club alongside Rep. Jim Banks (R-IN), Rep.-elect Madison Cawthorn (R-NC), and other Republican leaders as part of Club for Growth Action’s statewide “Save America” bus tour, spoke with Breitbart News about Democrat plans to tax guns as a means of penalizing those who own them.

“They will tax guns,” Lummis said. “They will tax every weapon as high as they can every year as a way to punish those of us who are gun owners.”

Lummis described incumbent Sens. Kelly Loeffler (R-GA) and David Perdue (R-GA) as the country’s “last line of defense” because Republicans retaining the Senate majority hinges on at least one of them winning their runoff race on January 5. 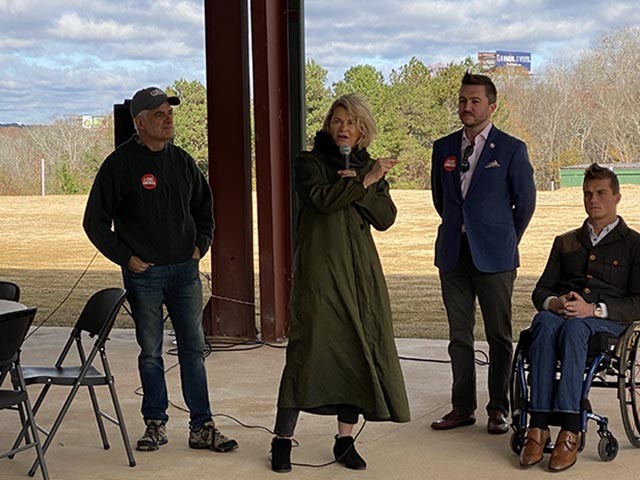 “Literally our Bill of Rights is going to be under fire without Loeffler and Perdue,” Lummis warned.

That, in addition to Biden’s policy provision that Americans sell back or register their “high-capacity” magazines, could result in the federal government imposing an overall estimated $34 billion in taxes on existing guns and magazines.

Breitbart News asked Lummis, a longtime lawmaker who grew up on her family’s ranch in Wyoming, what an ideal gun policy looks like from her perspective. Lummis replied, “It looks like the Second Amendment.”

“Really we don’t need more than the Second Amendment,” Lummis continued. “It protects our rights to own guns. It protects our rights to defend our property. It protects, in my case, as a rancher, my right to protect my livestock from predators. It is a tool that many of us use to enjoy harvesting wildlife for our winter food. It is a basic fundamental right that protects other rights. It protects us from the invasion of foreign governments, when you have a citizenry that knows how to use guns, knows when to use guns, and is prepared to protect and defend our nation.”

Lummis summarized that “the United States Senate in Republican hands is the last line of defense against crippling legislation” for Americans’ way of life.

The senator-elect joined in clay target shooting at the conclusion of the event. 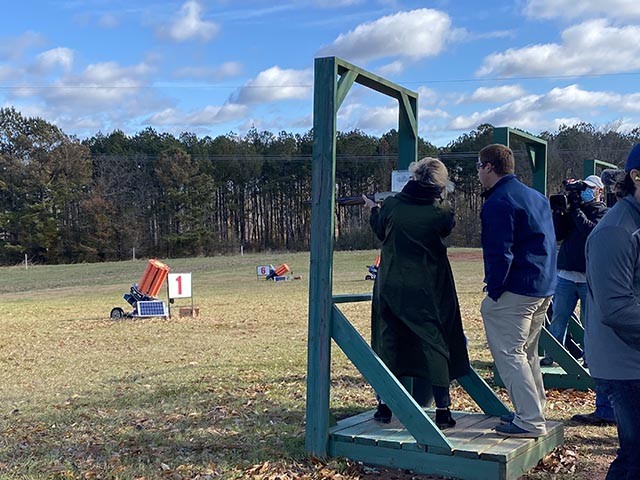 Banks and Cawthorn also emphasized during the event the consequences of a Democrat runoff win. The Senate, in that case, would be split 50–50, and if President Donald Trump and his legal team are unsuccessful in their challenges to the presidential election results, Vice President-elect Kamala Harris would be the decider for any tied votes.

“I’ve served with these radical Democrats the last four years in Congress. What they want to do to our country is dangerous,” Banks remarked to the small crowd at the gun club.

Cawthorn, who will be the youngest sitting member of Congress once he is sworn in, said, “If we lose the Senate, then western North Carolina values will not be represented. They will take away our most basic rights. … They want to take away our right to be able to defend ourselves.”

Club for Growth, in addition to the bus tour, is pouring $10 million into voter turnout efforts for the two Senate races, which polls indicate are both nearly tied. Club for Growth President David McIntosh told Breitbart News on Saturday that his goal after observing that Republicans are “less enthusiastic” following the presidential race is to “get folks excited.” The bus tour and its slate of high-profile guests “helps generate enthusiasm [and] gets the volunteers going so they really work hard,” he said. 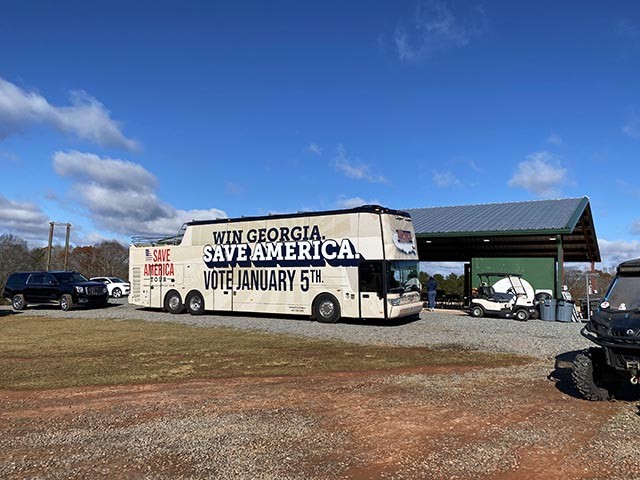 Overall voter turnout for the runoffs is expected to be high. Early in-person voting in Georgia began at some locations Monday, while absentee ballot requests have so far topped one million, according to the secretary of state’s office.