The government of Mexico is suing six U.S. gun makers and one Boston-area wholesaler, claiming “massive damage” created by “unlawful trafficking” of firearms to cartel and criminal elements.

The Mexican Government’s suit opens with trafficking claims and naming the six manufacturers and the wholesaler:

Plaintiff Estados Unidos Mexicanos (the “Government”), a sovereign nation, brings this action to put an end to the massive damage that the Defendants cause by actively facilitating the unlawful trafficking of their guns to drug cartels and other criminals in Mexico. Almost all guns recovered at crime scenes in Mexico — 70% to 90% of them — were trafficked from the U.S. The Defendants include the six U.S.-based manufacturers whose guns are most often recovered in Mexico — Smith & Wesson, Beretta, Century Arms, Colt, Glock, and Ruger. Another manufacturer defendant is Barrett, whose .50 caliber sniper rifle is a weapon of war prized by the drug cartels. The remaining defendant — Interstate Arms — is a Boston-area wholesaler through which all but one of the defendant manufacturers sell their guns for re-sale to gun dealers throughout the U.S. 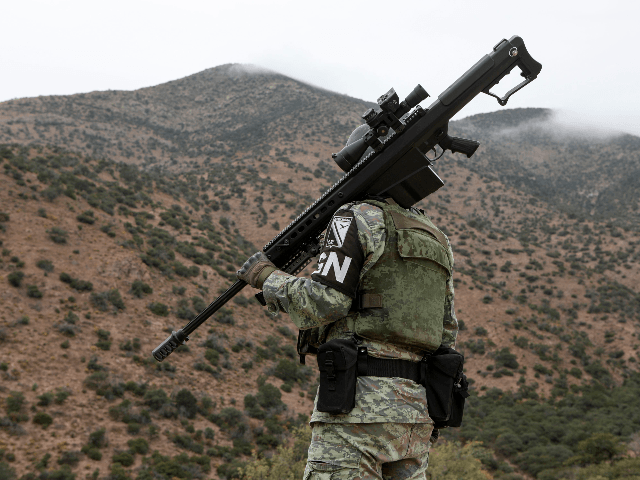 A member of the National Guard patrols the Sonora mountain range, where nine members of the LeBaron community were killed on Monday in the municipality of Bavispe, Sonora state, Mexico, on November 8, 2019. – The attack happened on an isolated dirt road in a region known for turf wars between drug cartels fighting over lucrative trafficking routes to the United States. (Photo by Herika Martinez / AFP) (Photo by HERIKA MARTINEZ/AFP via Getty Images)

The Mexican Government specifically states that the flood of said firearms into Mexico is not “an inevitable consequence of the gun business or of U.S. gun laws.” Instead, they suggest the flow of gun is the result of “the Defendants’ deliberate actions and business practices.”

They also point to the stringent gun controls in Mexico, then claim “Defendants undermine these stringent laws, and wreak havoc in Mexican society, by persistently supplying a torrent of guns to the drug cartels.”

The Mexican Government points to the Protection of Lawful Commerce in Arms Act (PLCAA), a 2005 Act which shields gun makers from frivolous lawsuits.

The United States is, of course, free to choose its social policy reflecting a balance between the financial interests of the gun industry and the rights of victims within its jurisdiction. By the same token, however, the Government of Mexico is entitled to choose a different social policy that reflects a different balance between the interests of victims in Mexico and the interests of gun manufacturers that foreseeably and deliberately cause trafficking of their guns into Mexico.

The Mexican Government is seeking a portion of the Defendants’ profits, as well as “damages…in an amount to be determined by trial.”
They also seek to be reimbursed for the “costs of suit, including reasonable attorneys’ fees, as provided by law,” and seek payment for other claims as well.