We all should have learned this lesson from the Michael Bellesiles scandal. In 2000, Bellesiles published a book claiming to have found that gun ownership was not widespread in colonial America. The book won the prestigious Bancroft Prize for historical scholarship. But the prize later was revoked after independent scholars exposed Bellesiles’s shoddy and misleading research. Bellesiles resigned from his post at Emory University.

Of course, Bellesiles is an extreme case, and each individual work of history needs to be evaluated on its own merits. But the precedent set by Bellesiles counsels caution when presented with historical arguments that discount or mischaracterize the Founders’ lived experiences and the importance (dare I say, necessity) of firearms to their survival.

Such caution is well warranted with respect to New York’s brief in the Bruen case. The state tries desperately, but unsuccessfully, to find historical support for its law tightly restricting the right to carry guns outside the home.

One example should suffice to show the extremes to which New York appears willing to go. The state’s brief claims that public-carry rights were tightly restricted even in the Founding period. To support that assertion, New York quotes an early nineteenth century North Carolina legal manual (by a man named John Haywood) instructing local officials to “arrest all such persons as in your sight shall ride or go armed.” (See New York’s brief at page 23.)

Seems promising for the anti-gunners, right? If merely carrying a firearm in public were a crime, it would be hard to argue that there was a robust right to carry at the Founding. 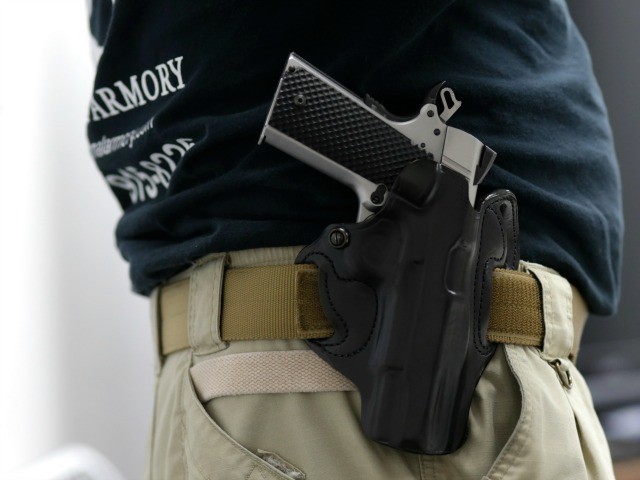 Except that’s not what the North Carolina law manual said. New York omitted a critical word from the quotation. The manual actually instructed officers to “arrest all such persons as in your sight shall ride or go armed offensively.” (You can read it for yourself here.)

That one word makes an enormous difference. You can see why New York left the word “offensively” out of its brief—because the full quotation hurts the state’s case. By singling out offensive carry for punishment, North Carolina indicated that defensive carry was lawful and accepted.

And North Carolina wasn’t alone in making this distinction. In the famous Boston Massacre trial of 1770, future U.S. President John Adams defended the British soldiers charged with murdering American colonists in downtown Boston. Some of those colonists were armed with clubs. Adams, an expert lawyer, surely would have seized on any plausible argument that being armed was itself unlawful. That would have bolstered his clients’ case for acting in self defense. But Adams didn’t do that. In fact, at trial he conceded, “Here every private person is authorized to arm himself, and on the strength of this authority, I do not deny the inhabitants had a right to arm themselves at that time, for their defence, not for offence.”

Adams’s speech, of course, doesn’t appear in New York’s brief. Yet it completely undermines New York’s claim that carrying arms in “populous” areas was particularly restricted at the Founding. There were few more populous cities in America in 1770 than Boston.

Zealous advocacy is one thing. But New York appears to be misrepresenting the historical evidence. The state omits a word to completely change the meaning of the material being cited. Such an error should call into question if any of New York’s historical presentation can be trusted.

As it turns out, New York’s presentation is further fundamentally flawed. It rests on the proposition that during America’s Founding period, there were two types of accepted restrictions that effectively barred public carry. But New York misrepresents both restrictions.

The first is the 1328 Statute of Northampton. What does a statute from fourteenth century England have to do with the U.S. Constitution’s Second Amendment? New York’s lawyers say it shows that restrictions on the right to carry were accepted “for many centuries.” (See New York’s brief at page 3.)

The problem is, the Statute of Northampton wasn’t a broad-based restriction on the right to carry for self defense. No, the statute basically said you can’t carry a gun in a manner to terrorize the people. The authoritative legal materials from both England and the United States confirm this view. That includes leading legal thinkers, such as England’s William Blackstone and William Hawkins, and early American legal scholars, such as St. George Tucker and James Wilson.

New York also claims that some American colonies and states adopted “Northampton-like statutes.” (See New York’s brief at page 3.) Well, sure. But again, that doesn’t mean the statutes were broad-based restrictions on peaceable carry. Look at the Virginia statute enacted in 1786. It prohibited someone from going out armed “offensively in terror of the country.” (Thomas Jefferson helped draft that Virginia statute, and Jefferson traveled with a pair of pistols in his saddle.) Similarly, a Massachusetts statute enacted in 1795 prohibited someone from going armed “offensively, to the fear or terror of the good citizens of this Commonwealth.” There’s that word “offensively” again. These statutes confirm that defensive carry for self defense purposes was not an offense.

The second law New York identifies arose well after the Founding era. In 1836, Massachusetts enacted a statute addressing, in certain circumstances, the carrying of firearms in public. Other states adopted similar laws over the next few decades. Now New York says that this so-called Massachusetts model required anyone who wanted to carry guns to show good cause.

No, sorry. That’s wrong. According to the statute, someone needed to show good cause to carry guns only if the government first received a complaint from another person “having reasonable cause to fear an injury, or breach of the peace.” And even if the accused party couldn’t convince a judge he had good cause to carry a firearm, the state didn’t take away his right to carry. Instead, he simply had to post a peace bond. (You can read the statute for yourself here.)

If New York’s interpretation of the Massachusetts statute were true, only those subject to its “good cause” requirement could carry; that would mean that the only people who were allowed to carry firearms in public were those who did so threateningly.  That is nonsense. The law didn’t prohibit anyone from carrying guns in a nonthreatening manner. It took the right to carry guns as a given. For more on the weak anti-gun arguments in Bruen, check out this video.

If you are interested in learning more about why Founding-era history supports a robust right to carry, you can read this excellent amicus brief by the Second Amendment Foundation, et al., in Bruen. Next, I’ll explain why New York’s law doesn’t advance public safety. And if you want to learn more about what to expect in the Bruen case, check out this video.

* Attorney Mark W. Smith is a Presidential Scholar and Senior Fellow in Law and Public Policy at The King’s College, a New York Times bestselling author, and the Host and Producer of The Four Boxes Diner channel on YouTube, which provides in-depth analysis on Second Amendment scholarship, legal matters, news, and issues.