The archbishop of Blantyre, Malawi, has blamed the country’s government for failing to stop a wave of ritual killings of people with albinism, generated by belief in the healing power of the bones of albinos.

Archbishop Thomas Luke Msusa said that Malawi intelligence services “could have identified the market for the bones in order to end the killings of the people with albinism,” local media reported.

“This would have helped to bust the syndicate or the traders of the bones,” said the archbishop, who is a convert to the Catholic faith from Islam. “They would have identified the market long ago.”

The condemnation of attacks on people with albinism, a congenital condition that leaves a person without pigmentation in their skin and hair, has been a leitmotiv of the bishop, who has called on all the members of the Church to fight the problem.

“Please my brothers and sisters don’t just wait for the us to condemn these acts,” Msusa said last June. “Don’t just wait for the bishops to write pastoral letters, no. We should all come together and with one voice speak vehemently against these abductions and killings of people with albinism.”

These “evil acts” are just too many in our society, he said. 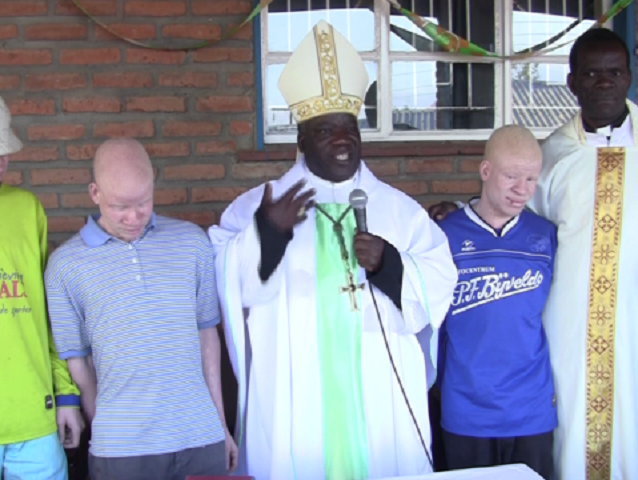 Malawi Archbishop Thomas Luke Msusa is determined to speak out in support of albinos. (Contributed Image).

In certain African countries like Tanzania, Malawi, and Mozambique, people with albinism are often hunted and killed for their body parts, which can be sold for thousands of dollars and are used in witchcraft rituals.

Superstitions claim that bones and other body parts of albinos, especially children, can bring riches, success, power, or sexual conquest.

In Malawi alone, where there are an estimated 10,000 people with albinism, at least 26 albinos have been killed since 2013, and at least five were slain in 2018, including one man just two weeks ago.

The United Nations refugee organization (UNHCR) has started relocating families of people with albinism in Malawi to Canada and other countries to escape the danger of kidnapping and death.

Last year, Amnesty International announced there had been a “huge rise” in the number of attacks over the prior two years, calling the attacks on albinos a “human rights crisis in Malawi.”