Zimbabwe police officers are allegedly soliciting bribes at coronavirus checkpoints, according to a report in that country’s Herald newspaper on Tuesday. The government has set up the checkpoints to control movement during the country’s virus lockdown.

Unconfirmed reports of the bribery have surfaced in Zimbabwe recently, prompting the national police to address the accusations on Tuesday.

“Bribery is a serious offense and we do not condone corruption in our rank and file,” national police spokesperson Paul Nyathi said.

He encouraged anyone with knowledge of an officer soliciting a bribe to report the incident to authorities. Nyathi claimed that officials would monitor officers on the ground to discourage such practices.

“All those found on the wrong side of the law will be arrested,” he assured the public.

Zimbabwe police officers have recently been accused of other offenses. Over the weekend, the Herald noted, police reportedly locked farmers out of a marketplace. Some farmers also accused police of taking their money. The incident occurred at Lusaka Market in Highfield, a suburb of Harare, Zimbabwe’s capital. 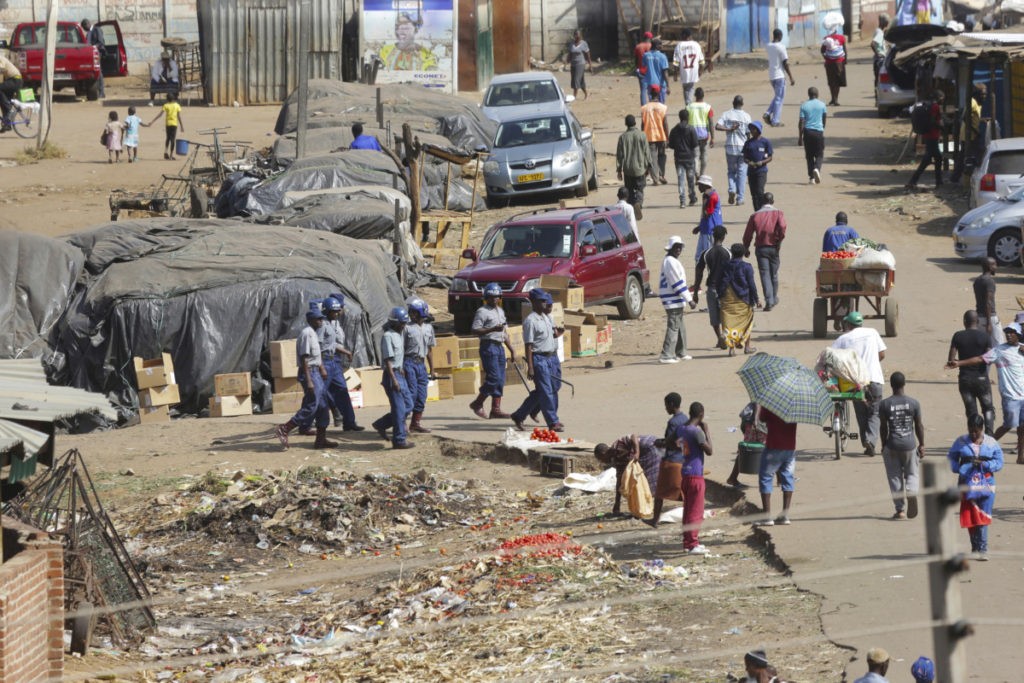 Zimbabwe riot police patrol the streets near a fruit and vegetable market full of people despite a lockdown in an effort to curb the spread of the coronavirus, in Harare, Zimbabwe, Tuesday April 7, 2020. (AP Photo/Tsvangirayi Mukwazhi)

Nyathi addressed the concerned farmers on Tuesday. “We urge all aggrieved farmers to come forward and make a police report. However, we are already investigating the case,” he said.

On March 30, Zimbabwean President Emmerson Mnangagwa declared a 21-day “total” lockdown in which people’s movement would be restricted, most shops shuttered, and all flights suspended in an effort to slow the spread of the Chinese coronavirus.

At the time, police had already begun mounting checkpoints in Harare. On routes leading to the city’s central business district, police were reportedly stopping cars and turning away pedestrians without the proper authorization to pass through.

A deeply impoverished and troubled nation, Zimbabwe suffers from rampant corruption. When Zimbabwe’s lockdown was announced, some citizens worried more about losing their access to money and food during the shutdown than they did about contracting the coronavirus.

“It’s better to get [Chinese] coronavirus while looking for money than to sit at home and die from hunger,” said one citizen.

At press time on Tuesday, Zimbabwe had reported 11 infections and 2 deaths from the Chinese coronavirus.