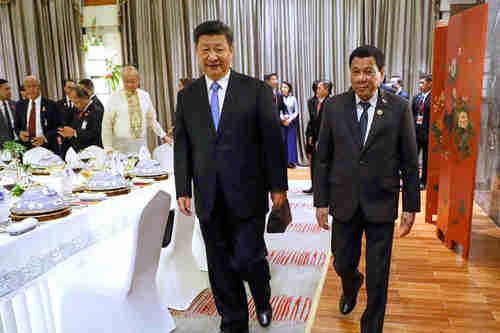 Philippines President Rodrigo R. Duterte was taking office in 2016 at just about the time that the Philippines won a historic case in the United Nations Permanent Court of Arbitration in the Hague thoroughly humiliating China by ruling that all of China’s activities in the South China Sea are illegal and in violation of international law.

Duterte’s first acts in office were to cut off relations with the United States and to take a trip to Beijing, where he was given the red carpet treatment by China’s Communist Party leader Xi Jinping. Duterte indicated that he would not enforce the Tribunal ruling and in fact appeared to be giving Scarborough Shoal away to the Chinese.

The international headlines at the time were things like “Duterte’s flip-flop into bed with China is a disaster for the United States.” ( “23-Oct-16 World View — Philippines leader Rodrigo Duterte in comic dance with China”)

So the leaders of China and the Philippines can make deals if they like, but we know from generational theory that major decisions like that are made by the people, entire generations, not by the politicians. So there was never any chance that the “flip-flop” would last.

Duterte’s decision on China was never really popular and generated immediate backlash at home, but it was reluctantly accepted by the Philippine people because the alternative appeared to be war with China if the Philippines tried to enforce the Tribunal’s ruling in the South China Sea.

In fact, in May of last year, Duterte explained his decision by recounting a conversation he had with Xi Jinping a year earlier, in which Xi threatened war:

Xi: Well we are friends. We don’t want to quarrel with you. We want to maintain warm relationship, but if you force the issue we will go to war.

Xi: Please do not do that because that is ours.

Duterte: That is according to you. But I have the arbitral [referring to the Hague tribunal ruling].

Xi: Yes, but ours is historical and yours is legal of recent memory.

Duterte: But that’s too far away. It’s almost alien to us to hear those words because we were never under Chinese jurisdiction.

Xi: Well, if you force the issue, we’ll be forced to tell you the truth.

Duterte: So what is the truth?

Xi: We will go to war. We will fight you.

After recounting the conversation, Duterte added: “Are they willing to fight? Because if they are willing to fight, we are. But why would I do that? It will result in a massacre and it will just destroy everything.”

So Duterte decided that he had to accede to China’s threats.

As part of Duterte’s agreement with China, China promised to deliver $24 billion investments in 27 different projects. Duterte repeatedly touted China’s financial help as a key reason for pivoting away from the U.S. and Europe, which he said haven’t produced material gains for the Philippines.

But by 2018, it turns out that the $24 billion investment promise was an empty promise. A $1 billion, 300-megawatt hydropower plant was never begun. A $700 million stainless steel plant was put on hold. A project to raise three islands from a waterlogged area was canceled. ABS-CBN (19-May-2017) and Bloomberg (25-Jul-2018)

Since 2016, Duterte has tried with some success to use bilateral negotiations to resolve the South China Sea disputes. However, a series of belligerent Chinese actions in 2018 had caused Duterte to be increasingly critical of China in public statements:

Duterte’s honeymoon with China, if it ever existed, appears to be over. Duterte now says that he plans to talk to U.S. President Donald Trump about the possible purchase of military equipment for the military and the police. Philippine Star

Zambia is one of 50 African nations whose leaders visited Beijing last week to hear Xi Jinping promise $60 billion in aid to Africa for infrastructure projects. This aid is in the form of loans that must be repaid.

Now Zambia is in talks with China over a possible takeover of the country’s electricity company, ZEWASCO, after defaulting on loan repayment from a previous loan.

China structures the aid agreements without concern for whether the loan can be repaid since China then has the option of taking control of the country’s infrastructure in case of default.

It is actually worse than that. China loans the money to the country and requires that it only be used to pay the salaries of Chinese workers and to purchase parts and equipment from Chinese factories. So the money is immediately returned to China but still has to be repaid, so the country is effectively forced to repay the loan twice. After default, and the Chinese take control of the infrastructure project, there is an enclave of Chinese workers and their families who will be there forever. Pulse Live (Kenya)