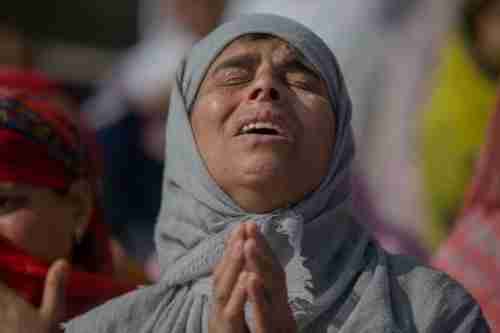 Details are scarce, but Mohammad Saleem Malik, a 26-year-old shepherd, was found dead in a courtyard by his family on Thursday morning near his home in Srinigar, the capital city of Indian-controlled Kashmir. Two hours earlier, he had left his room and entered the cattle shed to check his sheep and goats. Indian government security forces had been conducting a “cordon-and-search operation” (CASO), and allegedly fired indiscriminately at the neighborhood houses before dawn.

According to his father Muhammad Yaqoob Malik:

Clashes erupted soon after the news of the killing spread in the area with the locals alleging that Malik was killed in forces’ firing. In the ensuing exchange of fire, a militant was killed and three soldiers were wounded, one of whom died.

A Kashmir separatist group, the Joint Resistance Leadership (JRL), is calling for a shutdown of Kashmir on Friday. First Post (India) and Kashmir Watch and Rising Kashmir

Then in June, Indian security forces launched “Operation All-Out.” India said that this would “deliver a lethal blow to terrorism in Jammu and Kashmir with a long-term plan for a lasting peace in the trouble-torn Valley.”

At the time that Operation All-Out was announced, Indian security forces had identified 128 militants in Kashmir who would be targeted.

However, that was then. This month, the list of militants kept by the Indian security forces had more than 300 names on it. According to a senior police officer:

There has been a significant increase in the number of militants. The main reason for the high number of militants has been local recruitment since 2017. Last year 126 Valley youths picked up guns- which was the highest number since 2010 and this year over 130 have been inducted into militancy.

The significance of this statement is that it indicates a major change. In the past, militants came from Pakistan. In most cases, they were in Lashkar-e-Toiba (LeT), a Pakistan-based terrorist group that was formed in the 1990s by Pakistan’s Inter-Services Intelligence (ISI) agency to fight India in the disputed regions of Kashmir and Jammu. LeT was the perpetrator of the horrific “26/11” three-day attack on Mumbai in 2008, killing 166 people and wounding hundreds more. ( “After Mumbai’s ’26/11′ nightmare finally ends, India – Pakistan relations face crisis” from 2008)

The major change, as the police officer’s statement indicates, is that militants are now being recruited indigenously. Most of them join Hizbul Mujahedeen (HM), a Kashmir-based terrorist group that has been leading the anti-Indian stone-throwing riots, triggered by the July 8 2016 death of HM leader Burhan Wani in a gunfight with the Indian army. Since then, thousands of Kashmiris have been blinded in one or both eyes by pellet guns used by Indian security forces, and thousands of youths have been arrested.

From the point of view of Generational Dynamics, Kashmir is replaying previous generations of violence according to a fairly standard template. India’s previous two generational crisis wars were India’s 1857 Rebellion, which pitted Hindu nationalists against British colonists, and then the 1947 Partition War, one of the bloodiest wars of the 20th century, pitting Hindus versus Muslims, following the partitioning of the Indian subcontinent into India and Pakistan.

Now, as the survivors of the 1947 Partition War have almost all died off, leaving behind younger generations with no fear of repeating past disasters, Kashmir is repeating the violence of 1857 and 1947. Generational Dynamics predicts that Kashmir is returning to full-scale war, re-fighting the extremely bloody partition war of 1947. Tribune India and DailyO (India)