The human soul is the one place that can’t be spied on. The government of the People’s Republic of China knows that, and that’s why the regime fears religion—because it doesn’t know what its people might be praying about or otherwise thinking about.

Of course, the communists in Beijing do know that religion helped bring down the communist regime in Moscow.  For decades, the Roman Catholic Church, especially when it was led by Pope John Paul II, was a notable bulwark of resistance, in Poland and elsewhere, to Bolshevism. (This history has been detailed in many places, including John O’Sullivan’s 2006 book, The President, the Pope, and the Prime Minister: Three Who Changed the World.)

Today, determined to not go the way of the Soviet Union, the Chinese government is cracking down on religion.  This crackdown was fully evident in a February 22 article from Breitbart News’ Thomas D. Williams, headlined, “Chinese Kindergartners Forced to Sign Atheist Manifesto.”  As Williams explained, it’s part of a relentless campaign to “eradicate religious belief.”

As earlier reported in Bitter Winter, an online magazine devoted to religious freedom in China, students are being instructed to pledge, “I will adhere to the correct political direction, advocate science, promote atheism, and oppose theism.”

China’s persecution of Christians has ebbed and flowed—but mostly flowed—in  the seven decades since Mao Zedong seized power in 1949.  As The Guardian reported in January, the government is not only closing churches and harassing and imprisoning worshipers, but it’s even going so far as to order “‘retranslating and annotating’ the Bible, to find commonalities with socialism and establish a ‘correct understanding’ of the text.” 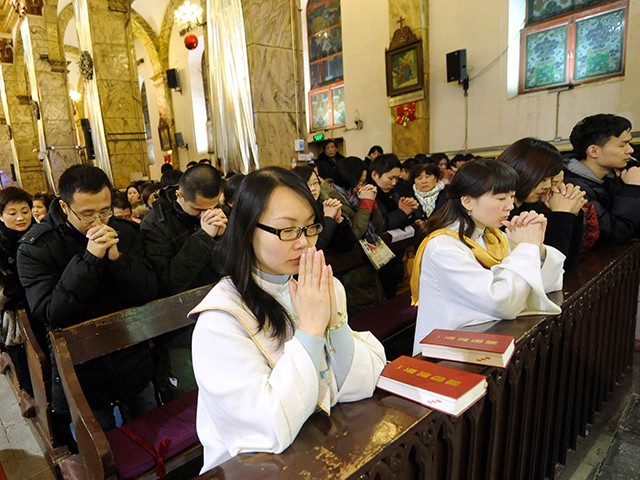 And the government’s treatment of other religions seems to be even worse.  Beijing has imprisoned, tortured, or killed many thousands of Buddhists and Falun Gong spiritual practitioners.  Astoundingly, the government has locked up a million or more Muslim Uyghurs, seeking to brainwash them en masse.

As Breitbart’s Williams notes, “Since 1999, the U.S. State Department has designated China as a ‘Country of Particular Concern’ under the International Religious Freedom Act for having engaged in or tolerated ‘particularly severe violations of religious freedom.'”

Of course, it can be fairly argued that the entire population of China has suffered particularly severe violations of freedom.  Estimates of the number of people killed, just in the three decades of Mao’s rule, reach as high as 77 million.

Yet still, since religion has always been so precious to Americans—going back the Pilgrims of 1620—it’s heartening to know that the Trump administration takes seriously the International Religious Freedom Act of 1998, which makes it official U.S. policy “to strengthen United States advocacy on behalf of individuals persecuted in foreign countries on account of religion.”  Within the administration, such leading figures as Vice President Pence, Secretary of State Mike Pompeo, and Ambassador-at-Large Sam Brownback have worked sedulously to promote religious freedom, in China and around the world.

Of course, for every Pence, Pompeo, and Brownback in the U.S., there seem to be a million Chinese bureaucrats dedicated to crushing religion in that country.   And sadly, many in the the rest of the world seem oblivious to the religious-freedom issue in China.  Why?  Perhaps because they, too, are hostile to religion, or perhaps they think, well, China is too powerful to mess with.

Yes, the People’s Republic of China is powerful and getting more powerful.  Yet fortunately—maybe even providentially—after years of evading and dithering, Uncle Sam is finally facing up to the threat from China; as noted here at Breitbart News, one emerging leader in the effort to counter the threat is Sen. Marco Rubio (R-FL), who has focused on China’s economic and military power.

And yet as we in America assess our needed response to this threat, a full inventory of our resources will include not only the technical and the geopolitical, but also the theological.

Faith has, after all, worked in the past as a sturdy shield—and maybe sometimes as a big hammer.   It’s worth recalling that back in 1983, President Ronald Reagan, speaking to the National Association of Evangelicals, referred to the Soviet Union as “the focus of evil in the modern world”—and eight years later, the communist state collapsed.

Is it too much to hope for the same thing to happen to the Chinese communist state?  To hope that the heads and the hearts of its people might be turned toward tolerance and freedom?

And with that goal in mind, some might be inclined to pray, because one never knows where the next miracle might be coming from. Or the next tragedy with, still, a miraculous outcome.

That point was made vividly in the 2007 Kevin Kline movie Trade, about human trafficking across the U.S.-Mexican border.  In the film’s most searing scene, a kidnaped woman named Veronica, who is being shuttled through the Southwest, is about to be raped again, whereupon she throws herself off a cliff, plunging to her death instead. In her last moments, she knows that while the traffickers might be able to get away with covert movements, they won’t be able to get away with murder—her body will be found, and the police will be on the hunt.

At that moment in the film, we hear the soaring strains of Rufus Wainwright’s song, “Agnus Dei.”  Thus, Trade takes a profoundly spiritual turn; we hear the Latin words, Agnus Dei/ Agnus dei/ Qui tollis peccata mundi (Lamb of God/ Lamb of God/ Who takes away the sins of the world).

In the wake of this dramatic inflection point, the film shows the traffickers being brought to justice.  So it seems fitting to note that the name “Veronica” is derived from ancient Greek; it means “she who brings victory.”

In this dramatic vignette we are reminded: It’s usually impossible to know how bad things happen—or what goodness might yet be hidden in badness.  Still, always, the faithful are steadfast in the belief that prayer helps.

Perhaps that’s what the Chinese government fears most: the sort of spiritual and psychological transformation that undid Soviet communism.  Yes, the Beijing government possesses many tools of tyranny, including its new social credit system.  And yet no tool that the communists possess can get inside the human soul.

Thus the godless authoritarians—by turns, cruel toward their people and fearful of the future—are left to rage.

In the meantime, the faithful of all faiths, knowing that their greatest power is hidden in their own souls, might prayerfully hope that better days will come to China.