The mask ban was introduced largely in response to pre-coronavirus protests. However, health experts in Hong Kong are now calling for people to wear protective masks to stem the spread of the Wuhan coronavirus.

In October, Hong Kong Chief Executive Carrie Lam invoked the Emergency Regulations Ordinance (ERO) to ban face masks amid city-wide unrest, which saw pro-democracy activists donning masks to hit the streets in protest. Invoking the colonial-era ERO, Lam categorized the protests as a state of “public danger” and banned the wearing of masks at both lawful and unlawful assemblies.

Thursday’s ruling maintained the constitutionality of the chief executive’s power to invoke the colonial-era emergency laws to bypass the legislature “when there is a public danger.” It added that both the ban on facial covering during lawful public gatherings and the power granted to police officers to remove masks were still constitutional.

Thursday’s ruling comes as Hong Kong faces a new wave of Wuhan coronavirus cases, with the city reporting an increase in its number of new infections recently.

Hong Kong’s High Court ruled last November that the anti-mask law was unconstitutional, as it went “further than necessary” and restricted fundamental rights. The government suspended enforcement, but then filed an appeal. Despite the worsening Wuhan coronavirus pandemic, Lam defended the appeal, claiming it was unrelated to public health. 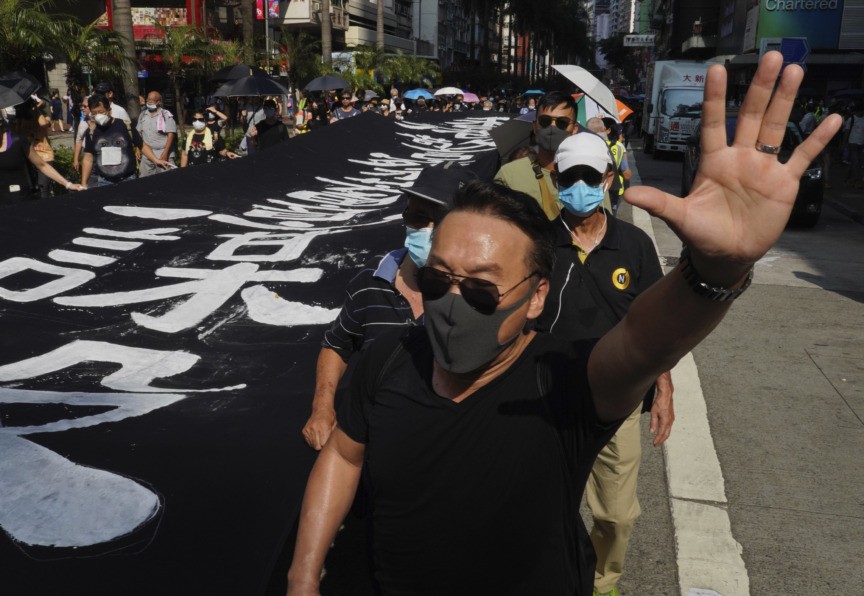 A masked protester holds up his hand to represent the protesters’ five demands as he walks next to a banner reading “Hong Kong police deliberately murder” in Hong Kong.  (AP Photo/Vincent Yu)

Ousted pro-democracy legislator Leung Kwok-hung, who brought the judicial review against the government, protested outside the High Court building on Thursday. He said that the government should be aware that their emergency legislation infringed upon the basic rights of Hong Kong citizens.

“As Wuhan [epicenter of the Wuhan coronavirus pandemic in China] lifts its lockdown, will you [Lam] use the Emergency Ordinance Regulation to bar inbound travelers from Wuhan? Of course, you won’t,” Leung said.

The activist added that he may appeal the ruling, as the archaic emergency laws pre-dated the Basic Law [Hong Kong’s de facto constitution].

“It seems to me the Court of Appeal did not consider the law to be outdated [and] vague and has granted the Chief Executive too much power to exploit Hongkongers’ basic freedom,” Leung said.

The Prohibition on Face Covering Regulation included a maximum penalty of one year in prison and a fine of HK$25,000 [US $3,225] for those who violated it.

Pro-democracy protests erupted last June over a now-scrapped extradition bill. Over several months, the protests evolved into large-scale demonstrations against police behavior, amid condemnation of Beijing’s encroachment on the autonomous region.

The protest movement eventually roused allies around the world including London: