The Chinese Communist regime opened the first of its annual “Two Sessions” of lawmaking bodies, that of the Chinese People’s Political Consultative Conference (CPPCC) National Committee, on Thursday, after postponing it due to the Chinese coronavirus pandemic.

China typically holds the “two sessions” in March and Communist Party officials lamented delaying them as an unprecedented step in modern Chinese history. The People’s Daily, the official newspaper of the Communist Party, celebrated the opening of the CPPCC’s meeting on Thursday as “a sign of confidence” in the face of reportedly 100 million people being forced into lockdowns while China insists it has its coronavirus outbreak under control.

Photos from the opening of the event showed what appeared to be hundreds of lawmakers, traveling from around the country, sitting in close quarters at the Great Hall of the People. All appear to be wearing masks, but none are respecting the six-feet distance scientists typically identify as necessary to avoid contact with the moisture droplets created by an infected person. 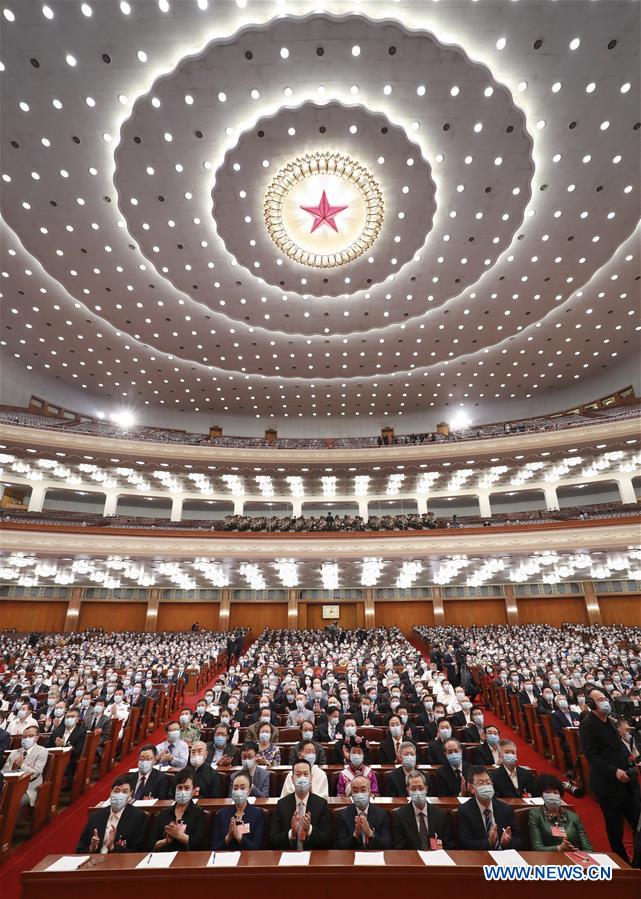 The People’s Daily stated that some social distancing measures were in place, but only identified keeping journalists away from the lawmakers and shortening the length of the event as moves to limit the number of people in the chamber:

Usually thousands of NPC deputies and CPPCC members descend on Beijing from all over the country, and hundreds of journalists will gather at the Great Hall of the People and other venues to cover the event.

Another way in which this year will likely be different is the length of the sessions, which could be shortened to one week.

The NPC is the “National People’s Congress,” the body that convenes the second of the “two sessions.”

“The decision to convene such a large-scale political event in the nation’s capital is a sign of confidence and a signal that China is ready to take a step toward a return to normal,” the People’s Daily declared.

The event opened with a minute of silence for those who have died of Chinese coronavirus in the country and the health workers “who sacrificed their lives in the fight against the epidemic.” The Global Times, another communist outlet, noted that dictator Xi Jinping participated in the minute of silence and applauded the incident as an extraordinary event, though moments of silence for those killed by what studies have shown to be a preventable pandemic have occurred around the world.

With the moment of silence out of the way, the Chinese government’s Xinhua news agency reported that the CPPCC members are expected to spend much of their time in the session working on new laws to combat future disease outbreaks, calling public health a “hot topic” at this year’s event. Relatedly, the body is expected to discuss economic measures to help those who have lost their jobs, families who have lost their primary breadwinners, and businesses decimated by the ongoing lockdowns in China.

Xinhua did not discuss the ongoing coronavirus crisis in the nation’s northeast. In March, Xi Jinping visited Wuhan, the origin city of the Chinese coronavirus, and declared that the outbreak “has basically been curbed” in China. On Monday, speaking at the World Health Assembly, Xi told the world, “in China, after making painstaking efforts and enormous sacrifice, we have turned the tide on the virus and protected the life and health of our people.”

A Bloomberg report this week revealed that as many as 108 million people in China are currently locked down in their communities, most in Jilin and Heilongjiang provinces, which border Russia. Reports from Jilin city, the regional capital, suggested that officials in the area are undercounting coronavirus cases and downplaying the severity of the outbreak there.

Chinese state media outlets did not address the northeastern outbreak in its coverage of the CPPCC’s agenda.

“Through arduous efforts, China has achieved decisive results in the fight against COVID-19 [Chinese coronavirus] to protect hard-hit Hubei and its capital city Wuhan,” Xinhua asserted. “The nation has also made major strategic strides in curbing the spread of the virus.”

Lawmakers in both the CPPCC and the NPC will also be tasked with creating a “civil code,” detailing how the Communist Party should control “property, contracts, personality rights, marriage and family, inheritance, and torts liability,” according to Xinhua. The civil code is six years in the making, having been assigned to the lawmakers to draft in 2014.

The NPC, scheduled to meet on Friday, will also look at what the South China Morning Post called “legislation for a new national security law tailor-made for Hong Kong that will proscribe secessionist and subversive activity, foreign interference and terrorism.” Reports indicate the law is intended to expand the definition of “secession” to make it more difficult for pro-democracy Hong Kong protesters to legally participate in peaceful protests against the Communist Party.