Hubei’s capital is Wuhan, the city where the Chinese coronavirus pandemic began. The delegates are in Beijing as part of what the Communist Party calls its “Two Sessions,” the annual meetings of its two federal lawmaking bodies, the National People’s Congress (NPC) and the Chinese People’s Political Consultative Conference (CPPCC).

China’s Xinhua news agency quoted Xi discussing public health during a meeting Sunday with Hubei deputies at an NPC session. Xi’s remarks were the first about public health since his speech at the World Health Assembly last week, where he announced that China would be developing a Chinese coronavirus vaccine and distributing it globally for free.

Xinhua published photos of the occasion on Sunday, showed Xi at the center of a high table sitting about six feet apart from other deputies, as doctors have recommended adhering to social distancing guidelines. Xi is the only one seen in the photo not wearing a mask: 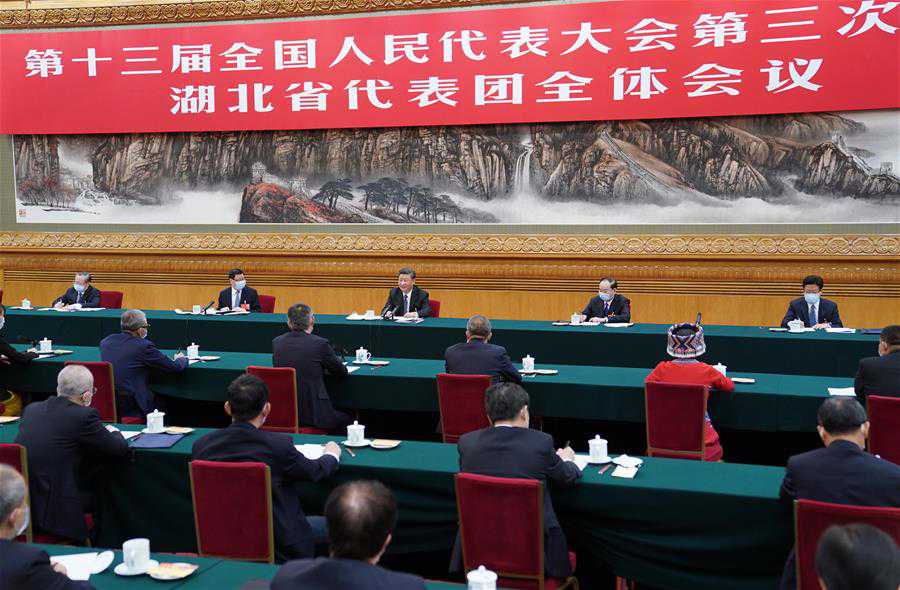 The photos are notably different from those of the CPPCC, where hundreds of representatives were apparently forced to sit in tightly packed quarters; Xi was not in attendance for their session last week: 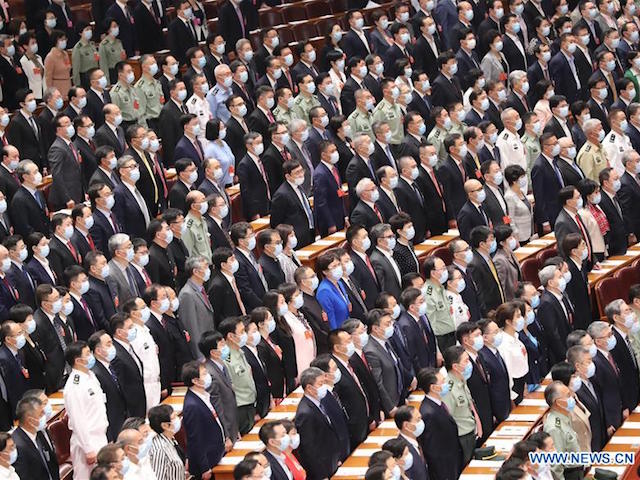 “China’s public health and medical service systems have played their key roles in dealing with the epidemic, but some weak links and inadequacies were also exposed, urging prompt efforts to fix them,” Xinhua paraphrased Xi as telling the Hubei delegation. (State media often eschew quotes, opting for paraphrasing.) Xi reportedly “emphasized more targeted and effective prevention and the fulfillment of responsibilities for reporting infectious disease epidemics and public health emergencies.”

Regarding any specific reforms, the Xinhua coverage only quoted Xi as specifying small work items such as “wearing masks, sorting garbage, social distancing and online reservation for hospital visits.” He urged the construction of more public health centers at the national and regional levels but did not details what those centers would do.

The Chinese dictator did not reportedly mention any specific weak links or shortcomings in how Hubei handed the local outbreak, instead applauding Hubei Communist Party officials for the “enormous sacrifices” they allegedly made. Xi’s lack of criticism did not reflect what many at the national level have done outside of Chinese media since the outbreak began in Wuhan last year: turn on local Wuhan officials and blame them for allowing the virus to get out of control.

“The local authorities didn’t like to tell the truth at that time,” Zhong Nanshan, China’s top respiratory illness doctor, told CNN last week of the pandemic. “At the very beginning, they just kept silent.”

In January, Zhou Xianwang, the mayor of Wuhan, admitted that his government kept the outbreak secret but blamed convoluted Communist Party law for preventing him from making public health emergency information public. Since Beijing made it illegal to warn his residents, Zhou said at the time, five million left Wuhan before the Communist Party alerted the world to a novel coronavirus outbreak.

Zhou has been notably absent from media appearances since those statements, though he appears to remain mayor of Wuhan at press time.

This month, China admitted that, in addition to hiding pivotal epidemic information from the public, local officials also destroyed early samples of the Chinese coronavirus taken from infected patients and from an open-air meat market Chinese officials initially claimed was the likely source of the outbreak. By “disinfecting” the market and destroying the samples, Communist Party officials made it impossible for scientists to compare the virus’s features in currently infected patients to its early iterations, thus making it less likely that they will be able to trace the virus’s evolution or find its original source.

Prior to admitting this, Chinese officials had dropped the wet market origin theory for the virus and had begun spreading the conspiracy theory that the U.S. Army was the true source of the pandemic.

Xi’s praise for Wuhan officials on Sunday echoes his remarks at the World Health Assembly, where he once again claimed that the pandemic had stopped being a problem for China.

“In China, after making painstaking efforts and enormous sacrifice, we have turned the tide on the virus and protected the life and health of our people,” Xi told the global public health body. “All along, we have acted with openness, transparency, and responsibility. We have provided information to the W.H.O. [World Health Organization] and the relevant countries in the most timely fashion. … We have done everything in our power to support and assist countries in need.”

Just a week prior, Xi told the steering group of the Chinese Communist Party Central Committee – the most powerful communists in the country – that “huge uncertainties still linger over the pandemic … and the country is still seeing infections among clusters of people in certain areas.”

There is no evidence that the shift from “the country is still seeing infections” to “we have turned the tide” was a truthful reflection of a major change in the pandemic’s effects in one week’s time. Multiple reports suggest that Wuhan continues to see infection clusters, many potentially hidden by local officials not counting patients likely infected. Xi’s remarks to the “steering group” also appear to contradict his declarations from Wuhan in March that the outbreak had been contained and the nation could return to normal business activities.