The mayor of Wuhan, China, the epicenter of a viral outbreak that has killed over 80 people so far, told Chinese state television on Sunday that five million people left the metropolis before he imposed a travel lockdown last week.

Scientists studying the new virus, believed to be part of the same family of coronaviruses as the one causing the Sudden Acute Respiratory Syndrome (SARS) outbreak of 2003, believe it is highly contagious even before carriers show symptoms. The symptoms are similar to traditional signs of the flu, including cough, difficulty breathing, and fever.

Reports indicate that Chinese authorities had reason to believe a viral outbreak had begun as early as a month ago, but they only made public the revelation that the outbreak was caused by a previously undetected virus last Monday. Zhou confirmed that the government indeed had information that should have triggered preventative public health measures earlier than his administration took them, lamenting the unsatisfactory government response to the outbreak.

Mayor Zhou Xianwang offered to resign on Sunday if the Communist Party deemed it necessary.

Zhou told CCTV, at a press conference where he wore a protective mask, that the five million who left largely did so as a product of traditional travel for Lunar New Year, which took place on Saturday. Wuhan is typically home to 11 million people and contains a large college campus, making it a common new home for students and transplants from more rural communities to move to. After the lockdown, Zhou said nine million people remained in the city, according to the South China Morning Post.

Zhou called the decision to impose a full lockdown on the city unprecedented but necessary to contain the spread of the virus to elsewhere in China. The lockdown canceled all flights into and out of Wuhan’s airport, shut down all public transportation, and placed roadblocks on major roads out of the city to ensure a halt in the free flow of traffic.

“Maybe Wuhan officials will be nailed by history with a bad reputation for doing so and locking up the virus inside the city,” the Morning Post quoted Zhou as saying, “but as long as it helps contain the coronavirus, we are willing to take whatever responsibility … including the resignation of Wuhan Party Secretary Ma Guoqiang and myself.” 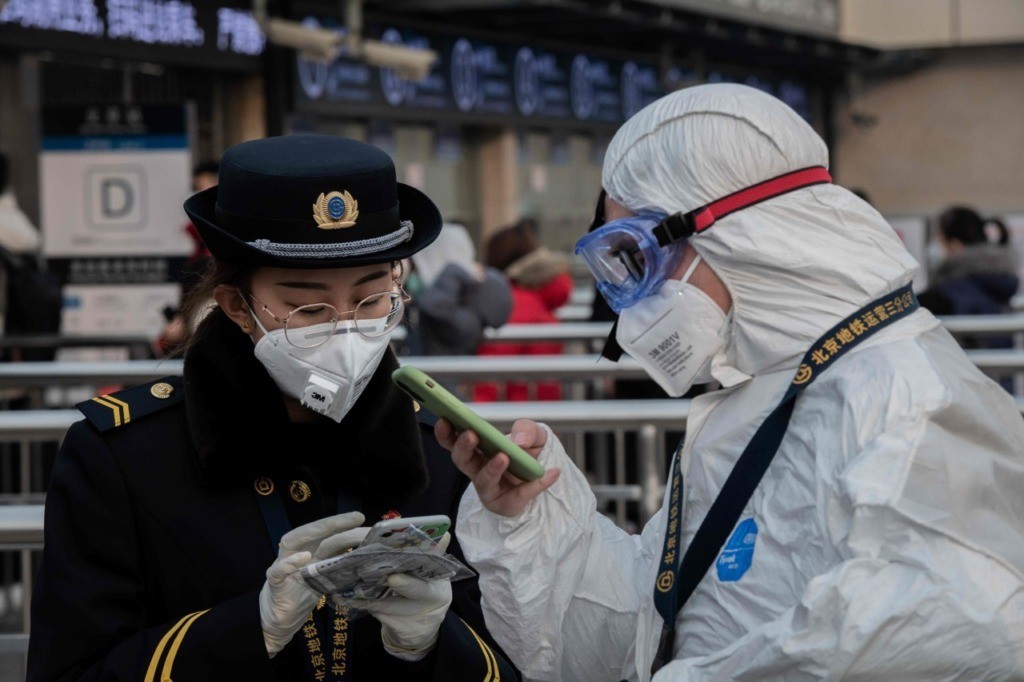 A security personnel wearing protective clothing to help stop the spread of a deadly virus which began in Wuhan, talks with a subway staff (L) wearing a mask at a subway station entrance in Beijing on January 27, 2020. – China on January 27 extended its biggest national holiday to buy time in the fight against a viral epidemic. (NICOLAS ASFOURI/AFP via Getty Images)

Zhou reportedly went on to grade himself for the press conference, giving himself an 80 out of 100. Chinese state propaganda outlet Global Times, diligently working to redirect blame for the poor response to the outbreak away from dictator Xi Jinping and towards local officials, claimed that the online response to Zhou’s press conference was to deem it a “disaster, noting that the Wuhan mayor seemingly had put on his mask upside-down, then could not provide an exact number for medical supplies amid the public health crisis, thereby exposing significant holes in local governance.”

The Communist Party controls all social media activity, censoring comments that it does not approve of and often arresting and imprisoning those who make the remarks. When the Global Times attempts to frame social media comments as a legitimate metric of public opinion, it never notes that Chinese people are not allowed to make comments the newspaper disagrees with.

Zhou’s comments follow the latest estimates on the outbreak tallying nearly 3,000 patients infected by the virus worldwide, nearly all of them in China. Over 1,400 people carrying the virus are located in Hubei province, for which Wuhan serves as a regional capital; authorities have identified six cases in North America and 33 elsewhere in Asia. All deaths have occurred in China; health officials have identified 81 people dying from coronavirus-related pneumonia.

Over 90 percent of Chinese provinces have documented cases of the new virus, including Xinjiang, the far west province home to the nation’s Muslim concentration camp system.

Scientists suspect that the official numbers as tallied by the World Health Organization (WHO), which is relying on China to be honest about its documented cases, are significantly deflated. Wuhan officials failed to take necessary precautions to stop the spread of the virus like isolating suspected patients in hospitals, as Chinese officials told local doctors, falsely, that the virus could not spread from person to person. Wuhan also hosted a banquet for 130,000 people, an annual tradition during Lunar New Year, in an attempt to break world records.

Reports have also surfaced of pneumonia deaths that the government refused to document as related to the virus. One particularly suspicious death was that of environmental activist Xu Dapeng, who died in Wuhan of pneumonia last week. His wife also died of pneumonia ten days before officials announced his passing. Sources close to the family told Radio Free Asia that the couple’s daughter attempted to get tested for coronavirus at a Wuhan hospital and doctors turned her away, stating only those patients hospital officials approve can get testing. Doctors also reportedly did not test the dead couple for carrying the virus despite symptoms similar to those of people carrying it.

Chinese officials also announced that the Lunar New Year holiday would be extended to February 2, allowing people the chance to not have to leave the house and potentially spread the disease. The extension adds only two days to the holiday.