A study by researchers at the University of California San Diego found it was “highly probable” that the Chinese coronavirus was circulating in Hubei province, China, as early as October 2019, the South China Morning Post reported on Monday.

Hubei is the central province home to Wuhan, its capital, and the place where doctors first diagnosed human infections of Chinese coronavirus. The most concrete existing evidence for the origin of the virus’s jump from animals to humans lies in Wuhan.

The Chinese Communist Party has repeatedly cast doubt on this, however, implicating the United States military, without evidence, and urging the World Health Organization (W.H.O.) to launch probes into the virus’s origins outside of China.

The study the newspaper highlighted was published in Science last week. Scientists observed potential viral evolutions and conducted experiments to gauge the timing necessary for an outbreak of the magnitude that Wuhan experienced in January 2020 to have occurred at that time.

“It is highly probable that Sars-CoV-2 [the name of the virus that causes Chinese coronavirus infections] was circulating in Hubei province at low levels in early November 2019, and possibly as early as October 2019, but not earlier,” the study stated. “By the time Covid-19 was first identified, the virus had firmly established itself in Wuhan. The delay highlights the difficulty in surveillance for novel zoonotic pathogens with high transmissibility and moderate mortality rate.” 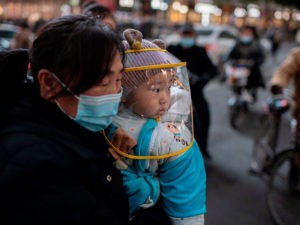 A woman wearing a face mask holds a baby that wears a protective shield during rush hour on a street outside of a shopping mall complex in Wuhan on January 13, 2021. (Nicolas Asfouri/AFP via Getty Images)

The study concluded that variations on the Chinese coronavirus may have infected humans repeatedly for months or years before the pandemic, but prior evolutions were too weak to stand up to human immune systems and died out, allowing the original animal virus to make multiple mutations into human bodies.

“The high extinction rate we inferred suggests that spillover of the Sars-CoV-2-like virus may be frequent, even if the pandemics are rare,” the study concluded, which would allow for the possibility that new evolutions from animal to human of the same source virus may infect people. The paper reportedly did not make any predictions regarding what those new viruses would look like or how they would fare against the currently existing crop of Chinese coronavirus vaccines.

In March 2020, the South China Morning Post claimed to have obtained Chinese Communist Party data on coronavirus cases identifying the date of the first documented case to have been November 17, 2019. Doctors confirmed the case in Hubei, but the data did not specify if the person was from Wuhan or elsewhere in the province.

The Post report is significant because the Chinese government had told the W.H.O. that it had observed its first Chinese coronavirus case on December 8, almost a month after the documents allegedly show the true earliest case. Beijing continues to insist that this is the case to argue for investigations in other countries to find the true origins of the coronavirus, particularly in light of evidence suggesting the virus had left the country prior to December.

Experts in Milan, Italy, for example, claimed that they had reports of an unidentified respiratory disease affecting people in the city in November 2019, which the Chinese Foreign Ministry has used to make the case for an investigation into Italy as the virus origin nation.

Lombardy, Italy, where Milan is located, is home to a vast Chinese immigration community; experts believe that the Chinese coronavirus had been circulating in Lombardy long before the first cases of infection were documented in the country in visitors from Wuhan.

In addition to targeting Italy, the Chinese Foreign Ministry has repeatedly accused the United States of having caused the pandemic. In March 2020, spokesman Zhao Lijian posted a message on Twitter asserting, “It might be US army who brought the epidemic to Wuhan. Be transparent! Make public your data! US owe us an explanation!”

Colleague Hua Chunying offered a more elaborate theory to reporters in May: that the virus had been circulating in America throughout 2019 and officials covered the disease up by claiming those suffering from it actually had lung injuries from using e-cigarettes, or vapes. Like Zhao, she claimed the origin of the virus was a U.S. Army laboratory, citing no evidence.

“There are … reports that soon after the closure [of a U.S. Army laboratory in Maryland], ‘E-cigarette disease’ broke out in the surroundings,” Hua claimed at the time. “According to data released by the US CDC in late February, the flu season that begins in the winter of 2019 has infected at least 32 million people in the United States, including 18,000 deaths from flu-related illnesses. CDC Director [Robert] Redfield has publicly acknowledged that some of the deaths from influenza were actually caused by COVID-19. These are all public records in US media reports available online.”

Hua’s theory has two major flaws: the Maryland laboratory in question, Fort Detrick, is not located in an area that documented significantly more cases of vaping lung injuries than anywhere else in America; and lung injuries are not contagious, whereas the Chinese coronavirus is highly contagious. No documented cases exist of anyone infecting anyone else with a vaping lung injury in the United States, although doctors do not quarantine patients or use protective gear to prevent such an infection. 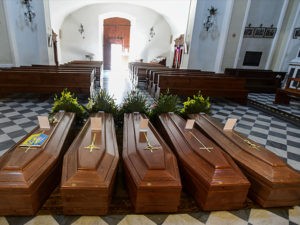 This picture taken on March 21, 2020 shows coffins on the ground of the church in Serina, near Bergamo, northern Italy.(Piero Cruciatti/AFP via Getty Images)

The W.H.O. sent a team of scientists to Wuhan last month to investigate the origins of the virus. The team left the city with no conclusions, complaining that China refused to hand over basic raw data on the number of cases and deaths in the city at the beginning of the pandemic, making it near-impossible to track infections. Given that the investigation occurred over a year after the pandemic began and after Chinese officials admitted to destroying early samples of the virus, scientists found little to observe there.

Internal W.H.O. documents showed frustration with China’s inaction in compiling and preserving early evidence to allow for scientific investigation, according to The Guardian.

“Following extensive discussions with and presentation from Chinese counterparts, it appears that little had been done in terms of epidemiological investigations around Wuhan since January 2020,” the documents reportedly read. “The data presented orally gave a few more details than what was presented at the emergency committee meetings in January 2020. No PowerPoint presentations were made and no documents were shared.”

The W.H.O. concluded Chinese officials did “little” to investigate the origins of the Wuhan coronavirus and were uncooperative with international investigators during the first eight months of the pandemic, according to an internal document written in August which the UK Guardian made public on Tuesday.

The document viewed by the Guardian was the executive summary of a travel report prepared by a W.H.O. team that met with Chinese officials last summer.

China again urged the W.H.O. to find the “origin” of the coronavirus in America.

“The U.S. has the most diverse virus strains, which make it the most suitable place for conducting study of origins,” a Communist Party-approved “expert” told the state propaganda outlet Global Times in February.