China began the five-day communist holiday known as “May Day” on Saturday by encouraging citizens to travel the country. Thousands, and perhaps millions, obliged, flooding tourist sites like the Great Wall of China and forming tightly packed crowds in major cities.

May Day – or, formally, International Workers’ Day – is a celebration of Marxism and communism ideology. In China, May 1 typically heralds the beginning of a five-day holiday marked by travel, packed movie theaters, and crowded restaurants. As a result of the Chinese coronavirus pandemic, which originated in the central city of Wuhan, 2020’s May Day festivities were muted. Chinese state media spent much of the past week predicting a raucous May Day season in the country, estimating that over 200 million people may choose to go on domestic vacations. The Communist Party announced prior to the holiday that local Party officials nationwide had planned at least 20 music festivals, in addition to events of “red tourism,” or visits to historical sites to honor Mao Zedong and other communist idols.

The Communist Party’s incitement to mass travel is part of its campaign to boast of an internal return to normalcy in the country. China declared victory over the pandemic in March 2020 when dictator Xi Jinping visited Wuhan, long before documenting major outbreaks for months around the country. Among the most embarrassing outbreaks was one documented in Wuhan in late January, several weeks after Beijing organized a crowded New Year’s Eve celebration meant to prove the virus was no longer a problem there. 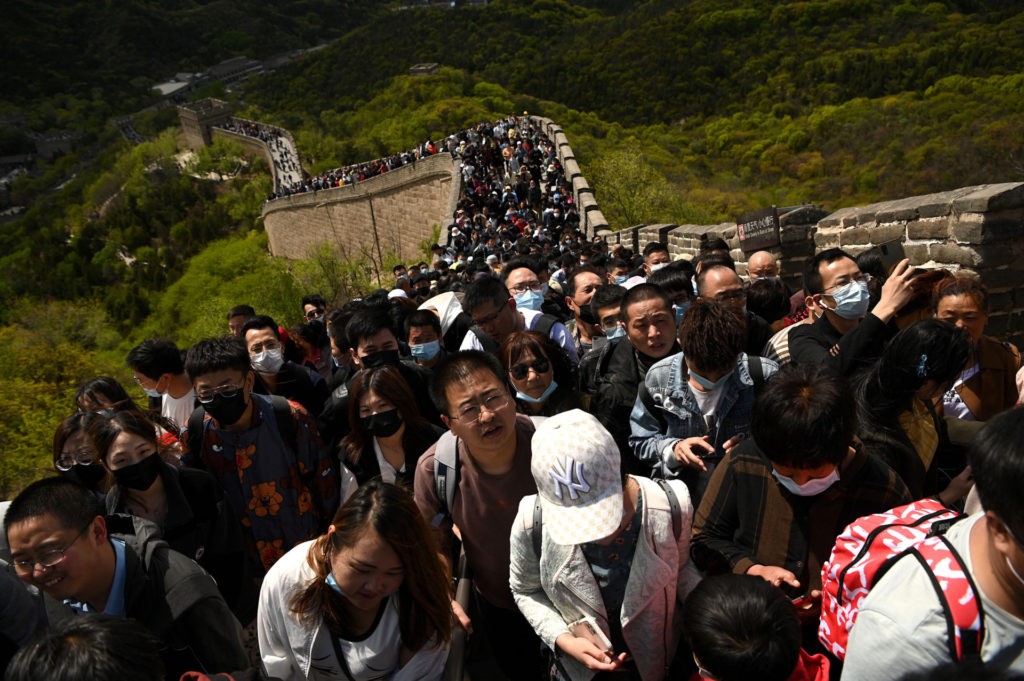 People visit the Great Wall during the labour day holiday in Beijing on May 1, 2021. (NOEL CELIS/AFP via Getty Images)

The communist regime’s insistence that it has defeated the virus has diminished interest in receiving coronavirus vaccination, also potentially hurting China’s quest for herd immunity. China is experiencing sluggish demand for domestically made vaccines, which infectious disease expert Zhong Nanshan recently warned could result in China reaching herd immunity far later than the rest of the developed world.

Those who are vaccinated may also become infected as the Chinese-made vaccines “don’t have very high protection rates,” according to Chinese Center for Disease Control CDC) director Gao Fu.

These concerns did not appear prominent in China’s celebratory coverage of the May Day holiday.

“Crowds, long expected, appeared across tourist spots in China with many struggling to reach their destinations, and many were stuck on highways for long hours on Saturday, the first day of the May Day holidays,” the state-run newspaper Global Times noted on Saturday. “The scene is an indication that Chinese people completely trust the country’s epidemic-control measures.”

The Global Times repeated the government estimate that 265 million people are expected to travel within the country between May 1 and May 5. On Sunday, it estimated that flight bookings hit a record high, surpassing 2019 travel bookings by 20 percent.

Passenger trips via railways, roads, waterways and air hit 58.27 million on the first day of the May Day holidays, up 119.2 percent year-on-year, with railways handling 18.83 mil-lion passenger trips and air passengers trips totaling 1.87 million, showed data from the Ministry of Transport,” the outlet continued. “Bookings for hotels surrounding the Badaling Great Wall in Beijing soared 80 percent compared with 2019.”

Wuhan, the origin location of the Chinese coronavirus pandemic, also received tens of thousands of visitors.

“The Yellow Crane Tower, a landmark tourist site in Wuhan, Central China’s Hubei Province, issued a notice at 4pm that it had received 40,000 visitors, 80 percent of top capacity. It may suspend entry due to epidemic control requirements,” the newspaper noted.
China’s state propaganda networks broadcast dramatic images of flooded train stations, airports, and other travel spots. The numbers are particularly impressive given that China regulates who can travel based on their ideology – those with low “social credit” scores, which take into consideration perceived loyalty to the Communist Party, cannot use mass transit. The last time China revealed its “blacklist,” in 2019, about 13 million people were banned from trains and other government-controlled transport.

The Great Wall of China, which spans about 12,000 miles but is administered through various spots that allow better views and access locally, reportedly sold out its nearly 50,000 tickets for Monday by Saturday. Images of those visiting over the weekend who had bought tickets in the past showed gigantic, tightly packed crowds on the monument, many of those images from the Badaling section of the wall in Beijing. The images showed no social distancing measures in place and few visitors wearing sanitary masks properly.

Watch: Thousands of Chinese flock to the Great Wall during May Day holiday pic.twitter.com/IJ6XpEcJML

No Chinese state media outlet expressed concern that promoting travel internally for millions of people may have a negative effect on coronavirus containment.

China has approved five different Chinese-made vaccine candidates since the pandemic began, but the Communist Party has placed a greater emphasis on exporting its domestic vaccines for profit than inoculating its own population. Dictator Xi Jinping has made multiple appearances at global events like the World Health Assembly declaring Chinese vaccines a “global public good” accessible to foreigners, but has not participated in any domestic vaccines drives and has not divulged if he himself has received any doses of a coronavirus vaccine.

The South China Morning Post contended on Sunday that China is very far from reaching its self-imposed vaccination goals.

“The country has set a target of vaccinating 40 percent of the population – 560 million people – by June. As of Friday it had administered 265 million doses,” the Hong Kong newspaper reported. “Nicholas Thomas, an associate professor in the Asian and international studies department at City University of Hong Kong, said that China would be unable to hit the domestic target.”

“The parallel challenge for China is that it needs to have a much larger percentage of its population vaccinated if it is to reopen its borders for both inbound and outbound tourism and trade,” the expert, Thomas, predicted.

A joint study by Chinese and American researchers published last week found that Chinese citizens are more likely to claim they trust Chinese vaccines than Americans, but are significantly more concerned with side effects and the costs of the vaccine (despite living under a socialist health care system) than Americans. The study also found that Chinese citizens are facing significantly less encouragement to get vaccinated. Of the respondents in the study, about half of Americans said their doctor had recommended the vaccine, while only 31.9 percent of Chinese respondents said the same.

Local Communist Party officials have attempted to encourage vaccination with programs that do not emphasize the health importance of the vaccine – for example, offering free ice cream with proof of vaccination or, conversely, publishing “blacklists” to shame unvaccinated people. Beijing scolded the latter tactic through its state media last month.

“If China continues with such a low vaccination rate, it will not keep up. There’s a possibility that in the future, other countries will have [herd immunity] but China doesn’t,” Zhong Nanshan, China’s top respiratory disease expert, warned in March.