A group of women in Kabul, the capital of Afghanistan, organized a protest on Tuesday demanding the radical Islamist Taliban respect their rights.

The Taliban, which ruled the country prior to the 2001 invasion by the United States, is a jihadist terrorist organization that follows fundamentalist interpretations of sharia, or Islamic law. It has historically opposed educating girls, allowing women in public without prominent head and face coverings, or granting women most of the basic rights considered universal in international human rights law.

The group began a campaign of conquest in April, after President Joe Biden announced he would not honor an agreement the Taliban made with Biden’s predecessor President Donald Trump that required American troops to leave the country by May 1. Instead, Biden asserted, troops would leave by September 11, the 20th anniversary of the jihadist attacks that prompted the Afghan War. Biden since reconfigured the deadline to August 31.

The campaign ended with the Taliban arriving at the city limits of Kabul on Sunday, prompting now-former President Ashraf Ghani to flee the country. Taliban officials declared the restoration of the “Islamic Emirate of Afghanistan” later that day and, in a press conference on Tuesday, answered questions about their proposed vision for the future of the country.

Taliban officials have repeatedly stated in the past four months that they will respect the rights of women “according to the sharia,” which has done little to calm the nerves of women in Kabul, particularly those who remember the Taliban’s previous rule.

Afghanistan’s Khaama Press reported that the women organizing in Kabul on Tuesday, demanding their rights be respected, “did not name the Taliban directly” as a target of their protest, but rather demanded in general terms that those running the country not violate their human rights.

“A number of women gathered in Police District 10 of Kabul demanding a share in the upcoming government,” Khaama reported, without specifying a number. “The women asked power holders not to be forgotten in the upcoming regime.”

Other journalists in Kabul published videos of the group, which appeared to be about ten women. The women were wearing black and hijabs in an apparent attempt to adhere to sharia. While Afghanistan is a majority Muslim country and the just-toppled Afghan government implemented its own form of sharia, women showing their face or hair in public was not an uncommon sight in Kabul before this weekend.

Brave Afghan women protesting for their rights in Kabul. “Work, education and political participation is every woman’s right” pic.twitter.com/BEW4aXNjEp

The scene on Tuesday differed significantly from reports of the city on Monday, the first full day of Taliban rule. According to reporters from the U.K. Guardian in the capital city, women largely remained home on Monday, nowhere to be seen on the city streets, uncertain of what behavior the Taliban would and would not allow. The prior Afghan government’s police and security forces had completely fled – which Taliban spokesmen used as an excuse to order the entry of jihadists into Kabul to preserve law and order – leaving roving jihadis in official Afghan police cars and gear.

“Most businesses were shuttered, even though the Taliban had urged people to return to work and normal life, with just a few bakeries, grocery shops and restaurants open so people could feed themselves,” the Guardian reported. “Fighters consolidated their hold on the city … [b]ut insurgent leaders – keen to project an image of a government-in-waiting – visited the national power company and hospitals, where they said women healthcare workers should stay in post.”

In Afghan media, the Guardian reported that Taliban leaders began broadcasting Islamist propaganda instead of the typical secular entertainment on television. Vice noted on Monday that photos began surfacing in the capital of businesses painting over advertisements featuring women models not covering their hair or faces.

The Taliban’s record of abuse against women was prolific prior to the U.S. invasion of the country.

“Women are imprisoned in their homes, and are denied access to basic health care and education,” former President George W. Bush said in November 2001, describing the nation he had just attacked. “Food sent to help starving people is stolen by their leaders. The religious monuments of other faiths are destroyed. Children are forbidden to fly kites, or sing songs … A girl of seven is beaten for wearing white shoes.”

Testimonies from regions the Taliban reconquered this year prior to Kabul suggest that little has changed. Last week, reports indicated that jihadists were invading homes door-to-door seeking girls as young as 12 to marry their jihadist fighters or force them into sex slavery.

“Taliban commanders, after capturing some of the provincial capitals, have ordered local Imams [Islamic leaders] to bring the lists of unmarried women aged from 12 to 45 for their soldiers to marry as they view them as ‘qhanimat or ‘spoils of war,’” the news agency OpIndia reported on August 12, citing the U.K.’s Daily Mail.

In areas previously conquered by the Taliban, women began to again don the burqa, a full head covering. Taliban spokespeople insisted that they did so of their own volition. 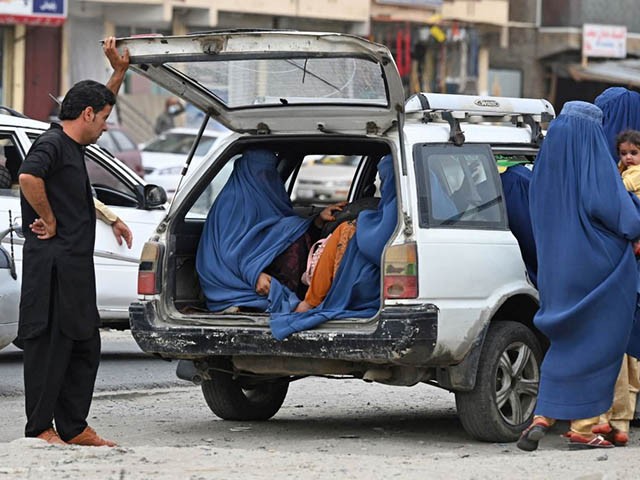 Women wearing a burqa get into a local taxi in Kabul on July 31, 2021. (Sajjad Hassain/AFP via Getty Images)

“The Islamic Emirate doesn’t want women to be victims,” senior Taliban leader Enamullah Samangani said. “They should be in government structure according to Sharia law.”

At a press conference Tuesday, spokesman Zabihullah Mujahid similarly insisted that the Taliban was open to giving women freedom, but only within the confines of its extremely repressive interpretation of sharia.