The Taliban terror group is allegedly “going door-to-door” in some regions of Afghanistan to select girls as young as 12 years old to become “sex slaves” for the group’s jihadi fighters, News Corp Australia’s News.com.au reported Thursday.

“An inside source suggests that Taliban leaders are attempting to kidnap and forcibly marry women,” the news site relayed, citing an earlier report by Bloomberg, published Monday.

“[T]he Taliban are going door-to-door in some areas, compiling lists of women and girls aged between 12 and 45 years for their fighters to forcibly marry,” Bloomberg reported on August 9.

“Taliban commanders, after capturing some of the provincial capitals, have ordered local Imams [Islamic leaders] to bring the lists of unmarried women aged from 12 to 45 for their soldiers to marry as they view them as ‘qhanimat or ‘spoils of war,’” OpIndia reported August 12, citing an August 11 report by the U.K.’s Daily Mail.

“The Taliban intends to ‘divide’ these kids among themselves as Jihadists consider them as a ‘prize,'” according to OpIndia, a conservative Indian news site.

“Taliban fighters are permitted to do this under their strict interpretation of Islam which views women as ‘kaniz’ or ‘commodities,'” Omar Sadr, a professor at the American University of Afghanistan, told the Daily Mail.

The Taliban reconquered large swaths of Afghanistan in recent months as U.S. and NATO-allied troops withdrew from the country to end a 20-year-long joint military operation based out of Kabul. The U.S. launched the War in Afghanistan in the autumn of 2001, by ousting the Taliban from Afghanistan’s government and will end the operation by August 31. The Taliban has swiftly regained control over at least 85 percent of the country in the wake of the nearly complete troop withdrawal. The Sunni terror group has ramped up its military campaign over the past week, retaking three northern provincial capitals in a single day on August 8. 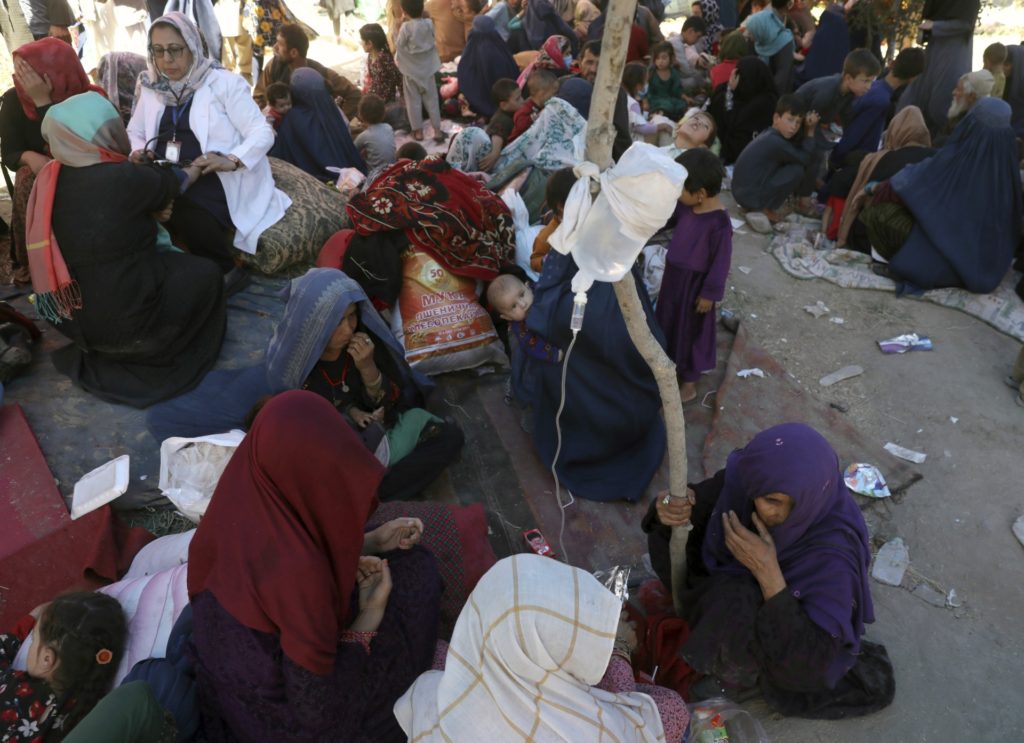 Internally displaced Afghan women from northern provinces, who fled their home due to fighting between the Taliban and Afghan security personnel, receive medical care in a public park in Kabul, Afghanistan, Tuesday, Aug. 10, 2021. (AP Photo/Rahmat Gul)

The Taliban has reimposed sharia, or Islamic law, across most of the regions it reconquered in recent weeks. The group has ordered taxi drivers in the Afghan town of Balkh, a regional hub near the Uzbek border, “not to drive any woman into the town unless she’s fully veiled,” the BBC reported on August 11. The British broadcaster published its report after sending a group of reporters to Balkh to interview members of the Taliban.

“The day after we leave, reports emerge of a young woman being murdered because of her clothing,” the BBC revealed. “Haji Hekmat, though, rejects allegations Taliban members were responsible.”

The BBC identified Hekmat as a “local Taliban leader and our host in Balkh.”

“All the women we see … are wearing the all-encompassing burqa, covering both their hair and face,” the broadcaster wrote of its visit to Balkh’s main bazaar, or market.

Hekmat insisted to the BBC that no women were being “forced” to wear the full burka, claiming that “the Taliban are simply ‘preaching’ that this is how women should dress.”

“In our Sharia it’s clear, for those who have sex and are unmarried, whether it’s a girl or a boy, the punishment is 100 lashes in public,” a Taliban judge named Haji Badruddin told the BBC after the broadcaster visited “a Taliban court session” in Balkh.

“But for anyone who’s married, they have to be stoned to death … For those who steal: if it’s proved, then his hand should be cut off,” he said.