A Taliban leader claimed Wednesday the terrorist organization wants to “build the future, and forget what happened in the past.”

Taliban spokesman Zabihullah Mujahid rejected fears the militant group was “exacting vengeance” on anyone who opposed it and wanted to reimpose strict controls on women from when it ruled the country 20 years prior, according to the New York Times.

Mujahid reportedly suggested that longer-term, women would be able to go back to their daily routines, the outlet continued:

Concerns that the Taliban would once again force them to stay in their homes or cover their faces are baseless, he said. He added that the requirement they be accompanied by a male guardian, known as a mahram, was misunderstood. It applies only to journeys of three days or longer, he said. “If they go to school, the office, university, or the hospital, they don’t need a mahram,” said Mr. Mujahid, who also serves as the Taliban’s chief spokesman.

Mujahid also confirmed a report that music would not be allowed in public. 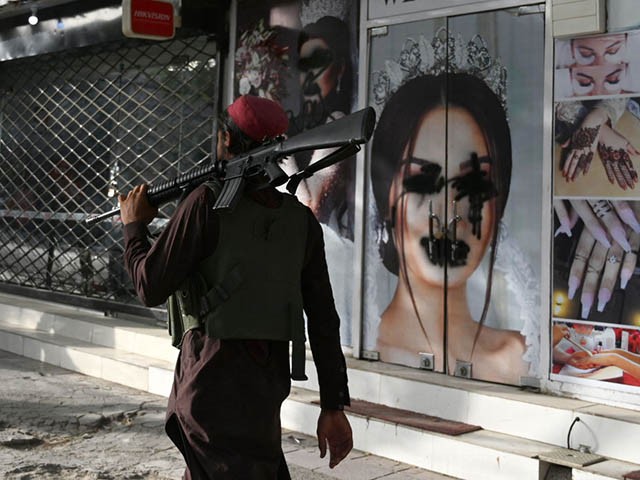 A Taliban fighter walks past a beauty salon with images of women defaced using spray paint in Shar-e-Naw in Kabul on August 18, 2021. (Photo by WAKIL KOHSAR/AFP via Getty Images)

“Music is forbidden in Islam,” he told the Times. “But we’re hoping that we can persuade people not to do such things, instead of pressuring them.”

The Taliban attempted to reassure Afghans and the international community that it would be “positively different,” but not many trust the organization, according to a recent AFP report listing promises the Taliban made:

The Taliban are “committed” to the rights of women, who will be able to work and study, the group’s spokesman Zabihullah Mujahid said Tuesday. But he stressed at every mention of women that their rights will be determined by Islamic law.

That has always been interpreted by the Taliban’s ultra-conservative leadership. The last time they were in power, from 1996 to 2001, they brutally suppressed women’s rights. Girls were banned from going to school, and women were largely barred from public life — allowed out of the house only when covered head-to-toe in a burqa and accompanied by a male relative.

Women accused of breaking the rules received harsh punishments, one of which was being stoned to death for adultery.

Mujahid told reporters during a news conference Tuesday the terrorist organization was urging women in Afghanistan to remain at home for their safety because the group had not yet instructed its terrorists on “how to deal with women.”