Speaking at a special “enlarged” politburo session of the Workers’ Party of Korea (WPK) in Pyongyang on September 2, Kim “set forth tasks to successfully conclude this year’s farming and to ‘make a breakthrough in settling the food problem of the people,'” South Korea’s Yonhap news agency relayed.

“Stressing the need to fully mobilize the labor force to ensure the state provision of farming equipment, he instructed officials to push ahead with increasing the grain yield ‘as much as possible before harvesting’ to achieve the planned grain production goal,” according to Yonhap, which quoted KCNA.

Kim admitted at Thursday’s politburo session that “the whole country and all the people [of] the agricultural field” this year had “waged [a] strenuous struggle to increase grain production despite unfavorable abnormal climate” that caused grains to be “in short supply”: 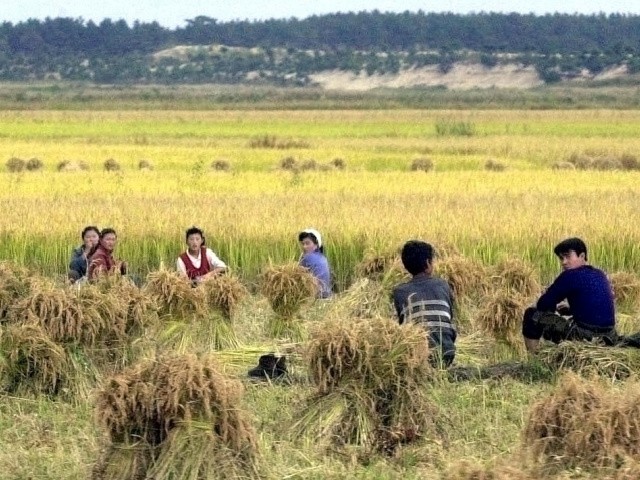 North Korean farmers take a break in rice fields in Kosong, 04 October 2001, near the North’s Mount Kumgang resort town, which has been open to South Korean tourists as part of inter-Korean reconciliation events. North Korean officials have said this year’s rice production will be bigger than previous years and will help ease its food shortages. But such international agencies such as the World Food Programme have also forecast North Korea’s grain harvest will be the worst ever this year AFP PHOTO (Photo by – / JOONGANG ILBO-CHOI JUNG-DONG / AFP) (Photo by -/JOONGANG ILBO-CHOI JUNG-DONG/AFP via Getty Images).

North Korea is currently at the tail end of its annual rainy season, which lasts from June through September. While the East Asian nation normally experiences some moderate flooding during this period, it suffered in August from extreme inundations that seriously affected provinces across its eastern region. The floods forced WPK officials to evacuate at least 5,000 people nationwide in the first week of August as rains cut off electricity to entire cities and damaged roughly 1,000 homes. North Korea’s largely outdated infrastructure meant the floods had an outsized impact on several communities. Rains washed away an entire road between North Korea’s Yonggwang County and Sinhung County, according to a KCNA report on August 10.

As Kim admitted on Thursday, the recent floods have exacerbated North Korea’s ongoing food shortage by washing away agricultural fields and their potential harvests.