Lawmakers in Tajikistan announced on Wednesday that China would build a new military base on the nation’s border with Afghanistan worth $10 million.

The Tajik officials claimed the base would belong to Tajikistan, not China, and house Tajik troops, though China would build and fund the venture. The announcement follows years of speculation that China has operated a base in the country in secret, apparently confirmed by a Radio Free Europe/Radio Liberty (RFE/RL) report this week citing leaked diplomatic exchanges.

Tajikistan has endured some of the most severe repercussions of the Taliban jihadist group’s seizure of Afghanistan in the past year, including a flood of hundreds of Afghan soldiers fleeing the country this summer as the federal government collapsed. Tajikistan held its largest-ever military exercises this year shortly before the Taliban prompted former Afghan President Ashraf Ghani to flee the country.

While Tajikistan has expressed alarm at the rise of the Taliban, the Communist Party of China has extended support to the terrorist organization. Foreign Minister Wang Yi met with senior Taliban officials on Monday and agreed to a variety of trade deals allowing the jihadists to export marble, pistachios, and other native goods into the Chinese market.

No nation, including Tajikistan and China, has recognized the Taliban officially as the formal government of Afghanistan.

The lower chamber of Tajikistan’s parliament confirmed on Wednesday that the Chinese Ministry of Public Security would “construct and outfit the facility for Tajikistan’s special rapid deployment police unit” on the Tajik-Afghan border,” the Tajik news network Asia Plus reported. The official confirming the project, First Deputy Minister of Internal Affairs Abdurahmon Alamshozoda, admitted that Tajikistan would not have control of the site until China completed the “outfitting” of the military base, but emphasized that it would be a Tajik, and not Chinese, outpost once completed.

Asia Plus reported officials estimated China would spend $10 million on building the base. 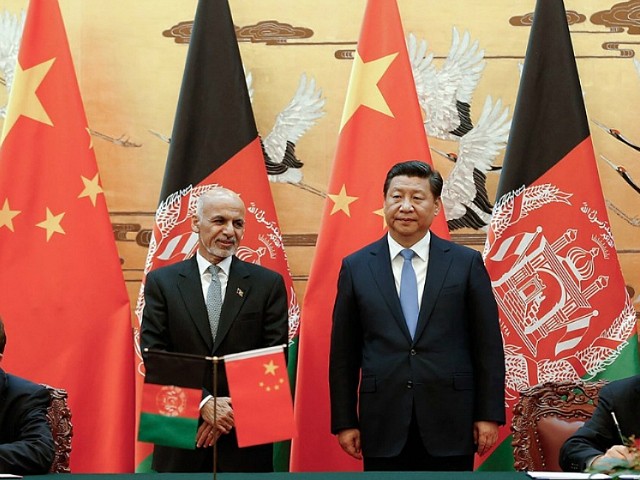 Another lawmaker, Tolibkhon Azimzoda, said on Wednesday that the two countries agreed on moving forward with the project “amid the Taliban’s takeover of Afghanistan and growing security threats along the country’s border.”

China has only one publically confirmed permanent military base abroad in the eastern African nation of Djibouti. For years, however, reports have suggested that the People’s Liberation Army (PLA) has maintained a presence in Tajikistan. RFE/RL reported this week that it had seen a communique between the two countries in which “the Tajik government has offered to transfer full control of a preexisting Chinese military base in the country to Beijing and waive any future rent in exchange for military aid from China.”

RFE/RL reported that experts believe China has operated on that base for at least five years, though both nations have denied the overwhelming evidence suggesting this arrangement, including satellite imagery of the site. The Washington Post revealed in 2019 that the site had been operational for three years, citing confirmation from anonymous Chinese soldiers.

“During a recent trip along the Tajikistan-Afghanistan border, The Post saw one of the military compounds and encountered a group of uniformed Chinese troops shopping in a Tajik town,” the newspaper revealed. “They bore the collar insignia of a unit from Xinjiang, the Chinese territory where authorities have detained an estimated 1 million Uighurs, a mostly Muslim ethnic minority.”

Xinjiang, which those who live there refer to as East Turkistan, is home to 1,200 concentration camps and the site of an ongoing genocide of Muslim minorities at the hands of the Chinese Communist Party.

Tajikistan’s security needs increased dramatically over the summer as the Taliban launched a campaign of conquest against the Afghan government – a response to President Joe Biden extended the 20-year-old Afghan War in April. As the Afghan government did not feed, much less pay, its troops, few stood in the Taliban’s way, particularly near the remote Tajik border.

Tajik officials confirmed in July that 1,037 swarmed the border and crossed into the country, fleeing the Taliban’s advance.

“Taking into account the principle of good neighbourliness and adhering to the position of non-interference in the internal affairs of Afghanistan,” a Tajik government statement read, “the military personnel of the Afghan government forces were allowed to enter Tajik territory.”

Tajik officials announced they were “taking all possible measures to maintain the situation” as the Taliban continued tallying victories, urging neighbors – particularly Russia – to lend a hand with security. Tajikistan also staged the largest military exercise in its history, boasting 20,000 troops, on the Afghan border that month.

In August, shortly after the Taliban seized Kabul on August 15, Tajikistan held a joint military exercise with China in Dushanbe, the national capital. China’s Public Security Ministry asserted that the rise of the Taliban – “the current anti-terrorism and security situation in the region” – contributed to the need for such cooperation.

Despite this assertion, China has extended a friendlier hand to the Taliban than nearly any other country on earth. Since August, the Foreign Ministry has insisted that global institutions unfreeze Afghan government assets to allow the Taliban to pay for its operations. It has especially pressured the United States to fund the Taliban.

“China attaches importance to the humanitarian difficulties facing Afghanistan, urges the US and other Western countries to lift sanctions, calls on all parties to engage with the Afghan Taliban in a rational and pragmatic manner,” Foreign Ministry spokesman Zhao Lijian told reporters on Wednesday.