South Korea’s Ministry of Health and Welfare issued a press release last week announcing its staff would carry out special inspections “for social distancing violations” from October 27 to November 2 “in areas [of Seoul] densely populated by foreigners and young people.”

“The stiffest penalty that can be given to a non-Korean national found breaching COVID-19 [Chinese coronavirus] rules is deportation,” the notice read.

“Bars, nightclubs, and other nightlife spots in Seoul’s party neighborhoods such as Itaewon, Hongdae, and Gangnam, in particular, will be watched closely from Wednesday to next Tuesday,” the statement said.

Health Ministry spokesman Son Young-rae told reporters at a press briefing on October 27 Halloween is “more widely celebrated among certain cultures and in neighborhoods that foreigners frequent, which will come under closer inspections for possible safety violations.”

Son said the Health Ministry issued its deportation warning because it is “one of the penalties for foreigners violating COVID-19 [Chinese coronavirus] safety regulations” in South Korea.

“Korean nationals are punished just as severely for the same violations,” he added. 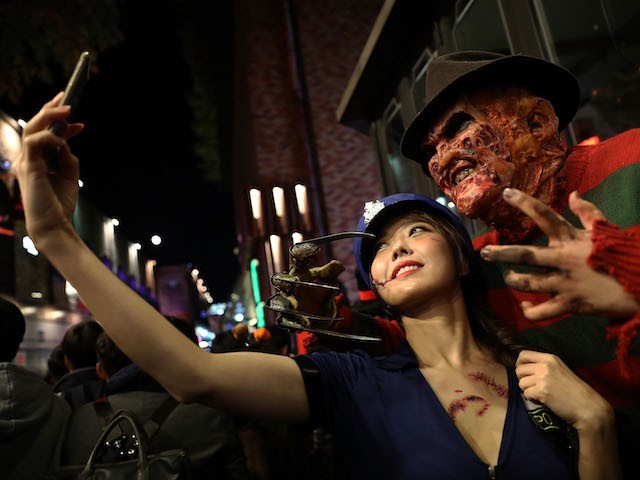 People dressed up in costumes participate in a Halloween festival on October 27, 2018, in Seoul, South Korea. (Chung Sung-Jun/Getty Images)

Speaking during a meeting of South Korea’s coronavirus response team on Tuesday, Prime Minister Kim said he was concerned about Halloween causing super-spreader events in Seoul because “the vaccination rate is not high enough among younger people and foreigners.”

“Western Halloween traditions like trick-or-treating are not common in Japan and South Korea, but those countries do offer a variety of Halloween festivals and celebrations, with a few returning this year after the pandemic,” Stars and Stripes, a military newspaper published by the U.S. Department of Defense, noted on October 26.

“Halloween parades are a popular way to celebrate the holiday in Asia, especially in cities such as Itaewon in Seoul, South Korea, and Kawasaki in Japan. They are crowded places where young adults dress up in elaborate costumes and let loose until the early-morning hours,” according to the publication.

“Korean amusement parks such as Everland go all out during the Halloween season, with themed food, park decorations, gory makeup stations and a revamp of their multiple gift shops to sell a variety of Halloween-themed merchandise,” Stars and Stripes detailed.

South Korean amusement parks that traditionally offer Halloween events, such as Everland and Lotte World, told the Korea Herald on October 28, “their parades and activities will still be masked and socially distanced until November dawns and restrictions are lifted.” 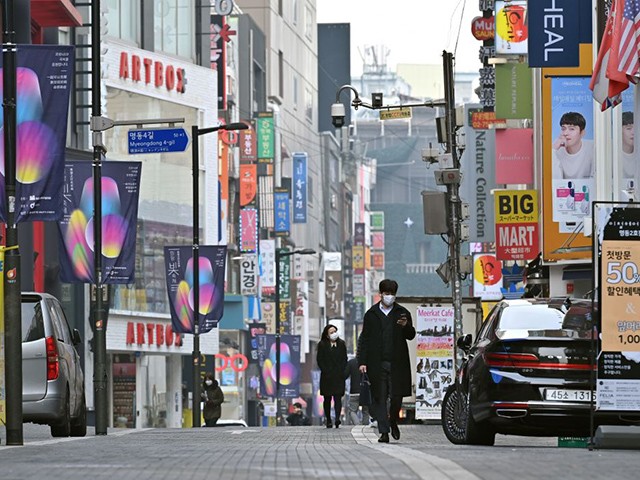 Masked pedestrians walk through the Myeongdong shopping district in Seoul on December 23, 2020, as South Korea banned gatherings of more than four people in the capital and surrounding areas at the time. (Jung Yeon-je/AFP via Getty Images)

“[A]s the most restrictive tier of social distancing is still in effect through Sunday [October 31], businesses offering drinking and dancing cannot open at night,” the Korea Herald noted on Thursday.

Despite Seoul’s ongoing restrictions on gathering, the public relations office of Yongsan, a district in Seoul, told the Korea Herald on October 27, its police officers “will still be making the rounds to ensure there are no violations.”

Yongsan is home to the Itaewon neighborhood, an established base for ex-pat communities in Seoul.