Hantavirus is a pathogen spread through rats. According to the Global Times, the Chinese Communist Party does not consider it a threat outside rural areas given that the species of mice and rats that spread it are not common in cities. The Times cited experts insisting Chinese people should not panic but noted that the Party is making a concerted effort to promote vaccination against hantavirus.

Local government officials appear to be taking the double threat of hantavirus and Chinese coronavirus seriously, however. The South China Morning Post, citing local media, reported on Monday that Party officials shut down schools from kindergarten through 12th grade “until further notice,” reportedly primarily to stop the spread of coronavirus, as hantavirus spreads through contact with infected rats and mice. The newspaper did note that the school shutdown appeared to be a response to the “double danger of a Covid-19 [Chinese coronavirus] outbreak and deadly haemorrhagic fever cases.” 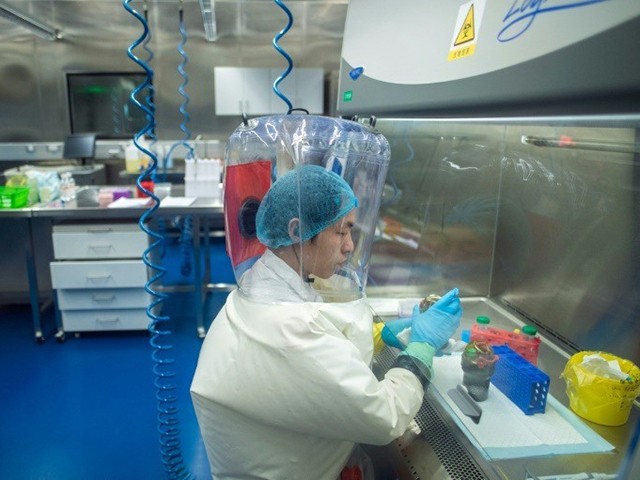 Inside the P4 laboratory in Wuhan, the Chinese biosafety laboratory accused by senior US officials of being at the origin of the coronavirus pandemic (Picture taken in 2017 – Johannes EISELE/AFP).

“Preliminary symptoms of epidemic hemorrhagic fever and common flu are similar. As a result, many patients may think it is a common cold by mistake,” the Global Times warned. “Medical experts in Xi’an urged patients to have treatment in a timely manner due to the onset of hemorrhagic fever and its rapid progress.”

The Chinese government newspaper noted that the hemorrhagic fever in question has a “high fatality rate,” but “experts” suggest the public not “panic as vaccinations can effectively prevent and control the disease, while human-to-human transmission is basically impossible.”

“People who live in urban areas are much less at risk of encountering hantavirus, have less need to panic, and have no need to kill their children’s pet rats, experts said,” according to the Times. The mass killing of pets has become a staple of Chinese coronavirus mitigation protocol, alarming the world. In one particularly gruesome incident documented in November, Chinese government agents abducted a woman and forced her into coronavirus quarantine, then clubbed her corgi to death. The woman’s security camera recorded the killing, making it impossible for officials to deny.

The Chinese government also denied that Chinese coronavirus, an extremely contagious disease, was transmissible from human to human, a lie propagated in early 2020 by the World Health Organization (W.H.O.). Hantavirus-caused hemorrhagic fever is not a novel disease, however, and the U.S. Centers for Disease Control (CDC) agrees that “transmission from one human to another may occur, but is extremely rare.”

The spread of hantavirus alongside Chinese coronavirus has caused concerns that Xi’an hospitals may be overwhelmed. The Global Times noted that, despite Chinese officials insisting that the nation has documented an extremely small number of coronavirus cases on a daily basis, “many hospitals with infection units have temporarily stopped receiving patients and are only attending to patients infected with [Chinese coronavirus],” leaving no room for those suffering from hantavirus infection.

The Global Times‘ hospital concerns clash with coverage in the People’s Daily, another Chinese government outlet and the official newspaper of the Communist Party. The People’s Daily declared China “confident” on Monday in fighting the omicron variant of Chinese coronavirus, discovered in southern Africa in November – long after, governments in Europe later admitted, it had first appeared on that continent. That confidence, it claimed, came from China’s swift and sweeping imposition of lockdowns and quarantine measures on thousands, and sometimes millions, of people.

“Experts suggested that China’s dynamic-zero COVID-19 strategy is a more responsible, efficient approach to deal with the virus, no matter what variants hit China,” the People Daily asserted, defending China’s rapid moves to block people from traveling for the Lunar New Year, “which will not only protect people’s health but also guarantee people’s normal daily lives.”

“As two of the most important holidays for Chinese people’s family reunions – the New Year and the Spring Festival – draw near, several cities and regions in China have announced policy encouraging residents to stay put during the two holidays,” the People’s Daily reported. “But unlike last year, this year’s proposals have been more targeted, considerate, and suitable to local conditions.”

In early 2020, shortly before the world became aware of the Chinese coronavirus, the Chinese government issued strict travel restrictions domestically but allowed five million people to leave the city of Wuhan alone for the Lunar New Year, spreading the virus around the world. Stories of Chinese travelers using fever-reducing drugs to avoid coronavirus health protocols abroad spread almost as rapidly as the virus.