China was a major contributor to Sri Lanka’s economic implosion, having destroyed some of the island’s key industries and bankrolled its corrupt socialist government with loans it could never repay.

Last week, Wickremesinghe angrily accused the Chinese of colluding with corrupt Sri Lankan officials to swindle the public by dangling a currency-swap offer that could never be fulfilled. The prime minister told parliament that Sri Lankan officials counted the $1.5 billion from the currency swap as part of the island’s foreign reserves, even though the terms of the deal established conditions Sri Lanka could no longer meet.

“We have requested the Chinese government to consider removing those conditions,” Wickremesinghe said.

On Monday, Wickremesinghe told Indian media he was “trying to have a dialogue with China” to invite them to a “donor conference which we intend to hold soon.”

Wickremesinghe made a point of effusively thanking Indian Prime Minister Narendra Modi and his government for their assistance to Sri Lanka, perhaps in the hope that China might step up to avoid being outdone by its rival India.

China acknowledged India’s “great efforts” to support Sri Lanka last Thursday, to the tune of about $3.5 billion – a little more than half of what Sri Lanka needs to make it through the rest of this year.

The Chinese Foreign Ministry said it was “willing to work with India and other members of the international community” to help the island through its apocalyptic economic “difficulties.”

Beijing was previously miffed by Sri Lanka’s canceling a Chinese energy project and going with Indian partners instead, a move the Chinese warned would “not send out a good message for foreign investors looking at Sri Lanka.”

The Daily Mirror pointed out that one of the many reasons Sri Lanka’s government, economy, and infrastructure are collapsing is that Chinese imports killed off Sri Lanka’s venerable textile industry:

[Local Textile Manufacturers Association Chairman Sarath] Kumara said that several importers importing textile at cheap prices from China obtained these tenders by presenting low price rates. A 5% tax relief is granted by the Chinese Government when exporting textile produced in China. Kumara said that by using that advantage to increase their profits these parties are importing clothes at cheap prices.

He also said that because of these activities local industry holders are at a loss. Sri Lanka cannot produce textile locally and have to export it because of the inability to compete against China. “Even the production of textile locally- to supply to state institutes- has stopped by now as these institutes import textile from China after refusing the textile produced by local industry holders using imported threads,” said Kumara who added, “any kind of textile can be produced locally with imported thread, but these activities will put an end to such a production.” 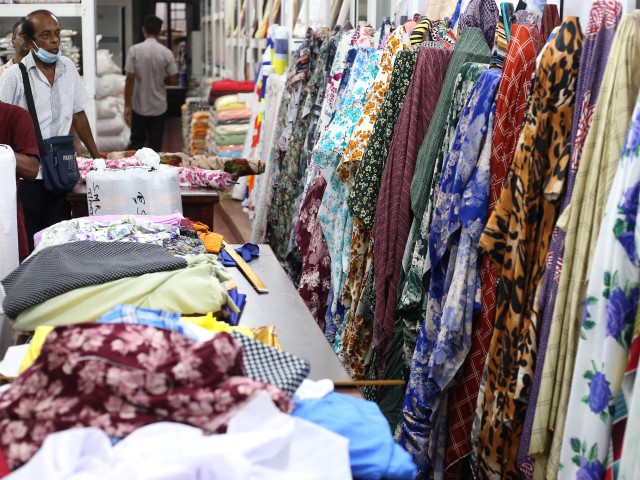 Fabrics are displayed at Pettah Market in Colombo, Sri Lanka, on May 24, 2022. Dr. Nandalal Weerasinghe expects Sri Lanka to face more challenges during the debt restructuring period, he said on Monday, May 23. (Pradeep Dambarage/NurPhoto via Getty Images)

Sri Lanka entered 2022 with hopes it might become an alternate source of textiles for importers who have qualms about doing business with China, particularly given growing concerns about China’s use of forced labor.

China has also been criticized for feeding the spending habits of the Sri Lankan elite with billions of dollars in loans under its Belt and Road (BRI) infrastructure initiative. Prime Minister Wickremesinghe evidently hoped China would contribute short-term aid to keep Sri Lanka stable and solvent until it could catch up on its Belt and Road loan payments.

Other observers suggest China could help Sri Lanka by restructuring or forgiving some of those gigantic “infrastructure” loans, many of them spent on projects that are unlikely to turn a profit. China’s regional ambitions could be seriously compromised if Sri Lanka collapses and becomes a cautionary example of BRI debt traps.