Former police officer and ardent Communist Party loyalist John Lee became the chief executive of Hong Kong on Friday, the 25th anniversary of China’s takeover of the once-British city, with a mandate from Beijing to ensure that pro-democracy protests never return.

Chinese dictator Xi Jinping made a rare trip out of Beijing to swear Lee into office on Friday in a bizarre ceremony in which a masked Xi stood at least six feet away from Lee. Rumors have swirled for years that Xi greatly fears a Chinese coronavirus infection and reports on Friday indicated that his swift departure from Hong Kong, after the brief visit to swear in Lee and other senior officials, was an attempt to avoid an infection.

Chinese state media celebrated Lee’s assumption of the role, replacing the widely-hated Carrie Lam, as a victory for Chinese “national security and social stability” and predicted that, with Lee in charge, Communist Party officials from within China were more likely to take jobs in the Hong Kong government and extend Beijing’s long arm over the city.

Experts told the Global Times, a Chinese government propaganda newspaper, that Lee is expected to “study how to attract more patriotic forces and other forces in the community to support the government’s policies.” 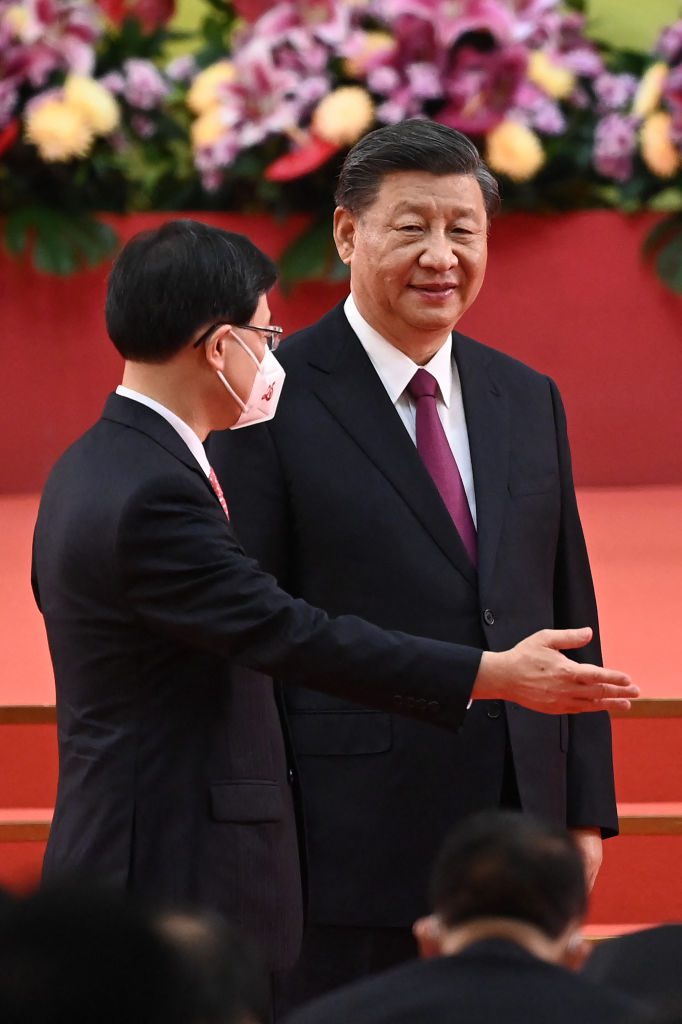 Hong Kong’s new Chief Executive John Lee (L) gestures to China’s President Xi Jinping following his speech after a ceremony to inaugurate the city’s new leader and government in Hong Kong on July 1, 2022, on the 25th anniversary of the city’s handover from Britain to China. (SELIM CHTAYTI/POOL/AFP via Getty)

The Communist Party describes communist loyalists as “patriotic” and has implemented programs like kindergarten education and propaganda campaigns to enhance “patriotism” in Hong Kong.

Hong Kong became a “special autonomous region” (SAR) of China’s in 1997, following Britain’s exit from the region. Under the agreement that returned Hong Kong to China, known as “One Country, Two Systems,” Hong Kong agreed to accept Chinese sovereignty over the city in exchange for China agreeing to allow Hong Kong to remain free and capitalist, meaning Communist Party laws passed in Beijing did not apply in Hong Kong.

China violated the One Country, Two Systems policy in 2019 by proposing a law that would allow the Chinese government to extradite anyone, not just Hong Kong residents, out of the city if accused of violating communist laws, essentially making them applicable within Hong Kong. The proposal triggered a wave of protests that attracted millions of people that year.

Ultimately, under Chief Executive Carrie Lam, Hong Kong withdrew the extradition bill but then began enforcing a “national security” law passed by Beijing in 2020 that outlawed “calls to foreign interference,” “terrorism,” “secessionism,” and “subversion of state power” with sentences of a minimum of ten years in prison. Police arrested individuals for everything from calling for democratic institutions to supporting foreign sports teams. The imposition of the law prompted a mass emigration from the city and widespread arrests of 2019 protest leaders, many of whom remain behind bars at press time. 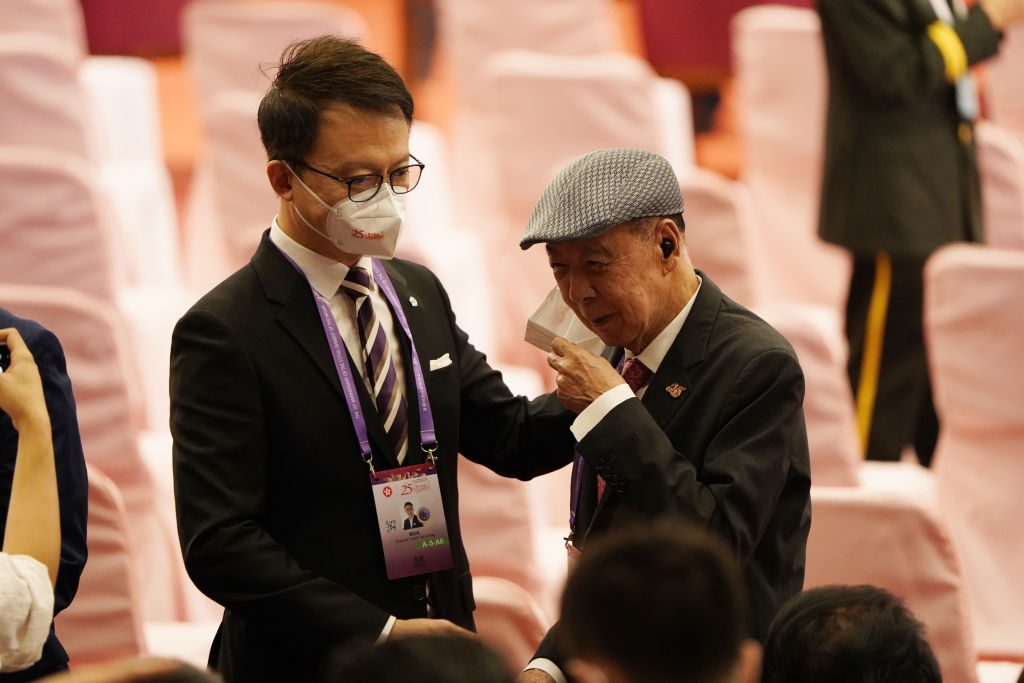 In his inauguration speech, Lee falsely claimed that One Country, Two Systems still operated in practice in Hong Kong, praising “the full support of the central authorities” for silencing the peaceful protests of 2019 and predecessors such as the “Umbrella Movement” of 2014.

“Hong Kong has of course also encountered various challenges, including the global financial crisis, the unlawful occupy movement in 2014, the Mong Kok riots in 2016, the riots and violence in 2019,” Lee said, “together with the interference in Hong Kong’s affairs by external forces which threatened our national security, and the [Chinese coronavirus] pandemic.”

“Thanks to the full support of the Central Authorities, the vitality and strength of the ‘one country, two systems’ principle, as well as Hong Kong citizens’ diligence and determination to seek improvements,” Lee proclaimed, “Hong Kong succeeded to overcome each and every challenge and move forward to scale new heights.” 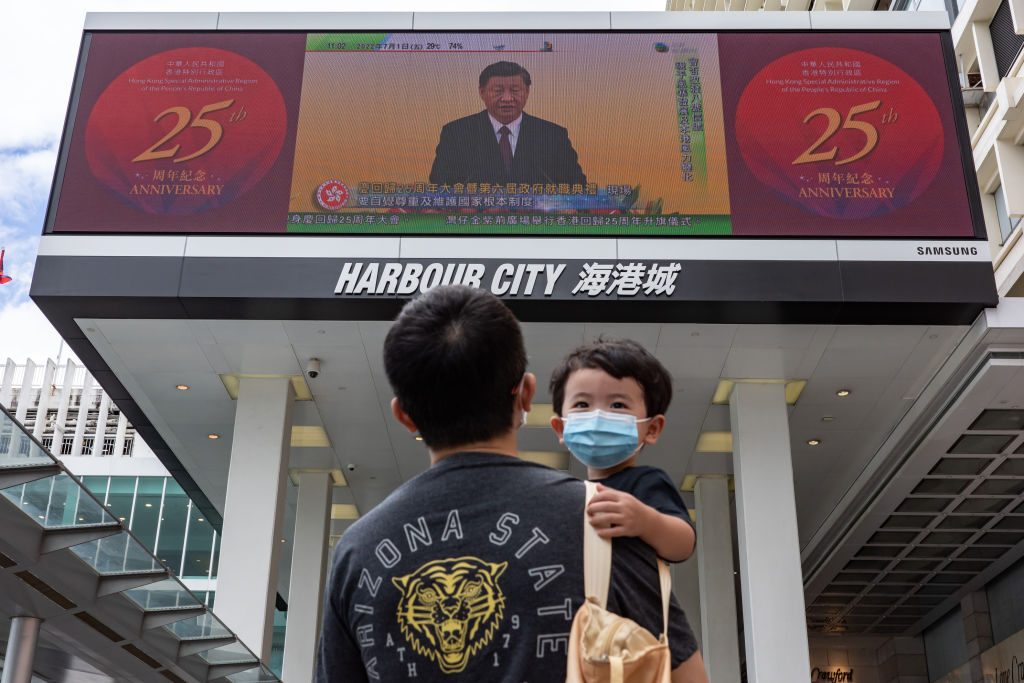 “With the enactment and implementation of the Hong Kong National Security Law, Hong Kong has made it to restore order from chaos,” Lee claimed.

Lee thanked Beijing additionally for implementing an election system referred to euphemistically as “patriots administering Hong Kong,” which bans individuals who do not support the Communist Party from participating in the Hong Kong government.

Lee is among the top beneficiaries of “patriots administering Hong Kong.” Thanks to that system, Lee ran for the chief executive position uncontested and “won” with 99 percent of the vote. Hong Kong does not allow citizens to elect their leaders; instead, an “Election Committee,” consisting of city elites that Lee participated in choosing, vote for the chief executive. In this year’s election, the committee voted to either “support” or “not support” the one candidate, Lee.

Outside of the inauguration ceremony and isolated celebrations that Hong Kong officials banned most independent journalists from covering, much of the city did not partake in the elites’ party atmosphere, the Hong Kong Free Press (HKFP) reported on Friday. Describing the celebrations as “muted,” HKFP reported an elevated police presence and “noticeably quiet” public areas.

“At almost every turn, police officers manned metres-high blue and white barriers,” HKFP noted of the areas around the convention center where Lee’s inauguration took place. “Officers were seen denying access even to people who said their office was in the area and that they needed to work.”