David Frum just castigated Michelle Malkin for failing to note the difference between that which is conservative and that which is “sociopathic.”

In his typical You-a Culpa piece, which I will not link as he’s a grotesque toad croaking for attention, he claims, basically:

1, Fine, you people with your determination to be “correct” about “facts” and your hyper-anal-retentive focus on “things that really happened” are, in the most trivial fashion conceivable, “right” about the so-called “fact” that there was no “heckling.”

2, I didn’t get around to actually viewing this “stupid evidentiary record” until late in the day, and thus, throughout the day, I was forced by principle to continue insisting I was right even though, having not bothered to check as I was frequently invited to, I had no basis for believing I was right. 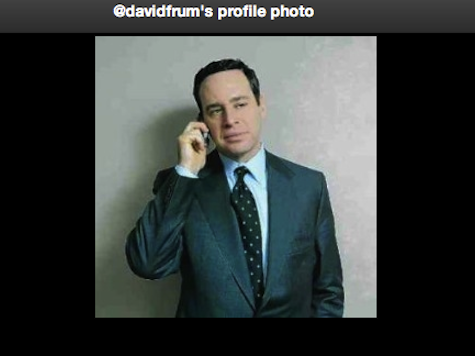 I’m rockin’ the ish out of that Nokia.  You can almost hear Higgins warming up the Ferrari for me.

3,  Even though, in a very trivial way, I was what some persnickety ankle-biting no-accounts term “completely wrong about the only issue in dispute,” I was in fact transcendentally right, in the sense that even if it’s not “heckling” it was cruel and “sociopathic” for anyone to answer the grieving father when he specifically demanded an answer to the question he’d asked.  And then looked around the room for that answer.

And you know that I, David Frum, best-selling author author of the critically-acclaimed successfully-printed Patriots, am a strong believer in not standing up for opinions when someone advances contrary ones.

So that’s David Frum — the more damaged he is, somehow, the more powerful he becomes.  Rather like the Hulk.

Among the many things I hate in this world (contact my Kleagle friend for a partial list; odds are, you’re on it), is this kind of intellectual insecurity, a brittleness, a weakness, a cowardice, that prevents alleged “men” from simply confessing what everyone around them knows:  That they were wrong.

It’s a sign of a malformed ego, the sort of ego which is at once enormous and grasping but at the very same time tiny and quailing, the sort of ego that fears a single admission of fault will begin the Great Cracking in the whole rotten shell of the whole fragile structure.

Someone who isn’t capable of confessing he is wrong is capable of virtually anything else.

Frum thinks his brand is damaged if finds any fault within himself.   I’ve always thought the exact opposite.