HOUSTON, Texas — A group of illegal aliens and their smuggler started a massive grass fire on a ranch in South Texas after being pursued by agents from the U.S. Border Patrol. The fire began at the end of a chase when the car carrying the illegal aliens left the roadway in what is known as a bailout. The car came to a stop on some dry grass and caught fire from the heat of the exhaust system as the occupants scattered into the brush.

The fire began on the La Copa Ranch which is located just south of the U.S. Border Patrol’s Falfurrias Checkpoint. This is an area known for illegal immigrants being smuggled to be dropped off to sneak around the checkpoint. Border Patrol agents were pursuing three suspicious vehicles in the southbound lane of Highway 281 when one of the vehicles left the roadway and got stuck in the soft sand according to Brooks County Sheriff’s Deputy Elias Pompa. “The tall grass in the area had recently been cut,” Pompa said. “It was very dry and quickly caught fire.”

Temperatures in the area have been reaching over 100 degrees this week and twenty to thirty mile-per-hour winds have been blowing from the south and west. “The fire quickly spread to about 200 acres,” said Brooks County Chief Deputy Benny Martinez. “Firefighters from Falfurrias and several surrounding agencies are working hard to quickly attempt to contain the fire. Some of the fire trucks and firefighters traveled over 100 miles to help Brooks County.” 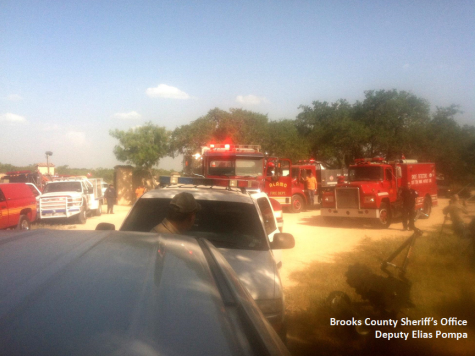 “At this point it is not believed that any homes or structures are in danger,” Martinez told Breitbart Texas, “but that could change quickly.”

The illegal aliens who bailed out of the vehicle that started the fire were quickly rounded up by Border Patrol Agents. It is not known, however if other immigrants might be already trekking through the ranchlands in their attempt to bypass the checkpoint. It would be difficult for them to move out of the way of the fire if they end up in its path.

This year, 48 illegal immigrants have died from dehydration and exposure in these ranchlands south of Falfurrias.