NOGALES, Arizona — On September 11, 2014, individuals or a group in Mexico hung a message to America over the U.S.-Mexico border wall condemning American support for Israel and declaring support for Palestine. U.S. federal agents discovered the banner draped over the primary border fence in Arizona’s Yuma Sector in a restricted area that could only have been reached from Mexico. The message also contained an image described by authorities as an anarchist symbol. The incident was kept secret from the American public by federal authorities. Breitbart Texas exclusively obtained the leaked incident report from federal agents on the condition their identities remain private.

The leaked incident report reveals that U.S. Border Patrol agents discovered the banner in the early hours of September 12, 2014, indicating that the banner had been draped over the border wall late in the night on September 11th. 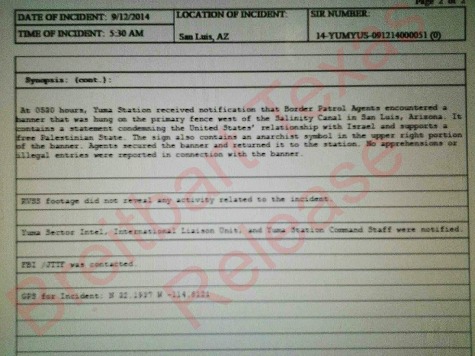 One federal agent involved in leaking the incident report to Breitbart Texas expressed concern over the symbolic timing of the message and said, “Everyone has been discussing whether cartels would work with ISIS or other terror groups, but this indicates that political groups in Mexico’s border region may be more of a concern in terms of working with terrorists to make a political statement in America.”

Breitbart Texas recently published a leaked intelligence report from the Texas Department of Public Safety that was distributed to federal agencies and indicated that ISIS members or supporters were known to be discussing the potential use of the porous U.S.-Mexico border as a means of secretly entering the United States. In the immediate aftermath of that report, experts and pundits erupted into disagreements about whether ISIS would take advantage of the open U.S.-Mexico border instead of utilizing air travel and whether Mexican cartels would actually risk shutting down valuable illicit trade routes by working with Middle Eastern terrorists. The potential for radical and extremist Mexican-based anti-Israel or anti-U.S. political groups to either work with ISIS or engage in extremism was not part of the public discourse.