Dutch Parliamentarian Geert Wilders will deliver the keynote address at the Muhammad Art Exhibit and Contest being held on May 3rd, in Garland, Texas. The Art Exhibit is being put on by Pamela Geller’s American Freedom Defense Initiative (AFDI). It will be put on at the same facility in Garland as the Honor the Prophet Conference that was held by a pro-Islamic group in January.

Wilders earned international recognition in the free speech movement when he was brought up on charges for speaking out against Islam at a March, 2014, rally where he promised to reduce the number of Moroccans living in the Netherlands. “The public prosecutor in The Hague is to prosecute Geert Wilders on charges of insulting a group of people based on race and incitement to discrimination and hatred,” prosecutors said in a statement, according to an article by Sam Webb on the DailyMail.

“Politicians may go far in their statements, that’s part of freedom of expression, but this freedom is limited by the prohibition of discrimination,” prosecutors stated.

Time Magazine called Wilders “The ‘Prophet’ Who Hates Muhammad.”  Winston Ross wrote, ”Wilders may look just as cartoonish as The Donald. But unlike Trump, he’s a legitimate force in politics. For nearly a decade, he’s served as the leader of Holland’s anti-Islamic political party, and he regularly uses his platform to denounce not only violent jihadists but all of Islam.” 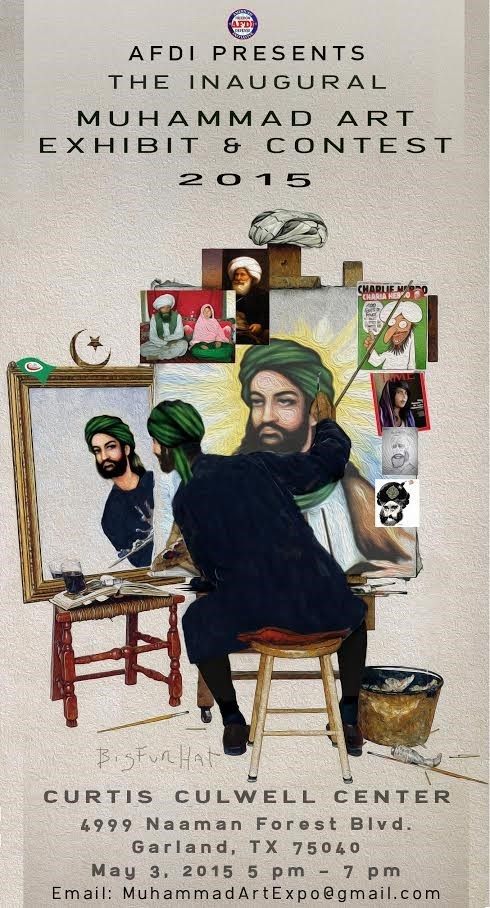 Breitbart Texas previously reported the announcement of the art exhibit. Geller’s event comes on the wake of the Islamic terrorist attack on the French magazine Charlie Hebdo in January. Following the attack, the Council on American-Islamic Relations (CAIR) scheduled the “Stand with the Prophet” conference at the public school district’s conference center. Geller, the President of the American Freedom Defense Initiative (AFDI), scheduled a protest outside the event that was attended by approximately 2,000 people.

“Enough is enough,” she explained in a statement obtained by Breitbart Texas. “They’re just cartoons. We’re holding this exhibit and cartoon contest to show how insane the world has become — with people in the free world tiptoeing in terror around supremacist thugs who actually commit murder over cartoons. If we can’t stand up for the freedom of speech, we will lose it — and with it, free society.”

In addition to the art and cartoons featuring The Prophet Muhammad, the exhibit will also have presentations from other free speech advocates.

“Of course, this event will require massive security,” she assured potential attendees. “But this exhibit has to be staged. If we don’t show the jihadis that they will not frighten us into silence, the jihad against freedom will only grow more virulent.”

The art exhibit and contest will culminate with the award of a $10,000 prize for the best artwork or cartoon. Geller also announced on Sunday that there will also be a $2,500 People’s Choice Award. People wanting to submit artwork or cartoons for consideration may do so by sending an email to Muhammadartexpo@gmail.com.

The Expo will be held at Garland Independent School District’s Curtis Culwell Center on May 3rd, from 5 to 7 p.m. Central Time.