A West Texas mother was furious and demanded an apology from a middle school assistant principal. The assistant principal used a black magic marker to fill in a perceived gap in the hair part on her son’s head. Apparently, the hairstyle did not meet the dress code so the administrator took the liberty of coloring in the missing hair late last week.

The parent, Monica Esquival, told the Plainview Daily Herald that the Plainview Independent School District (ISD) assistant principal at Coronado Middle School drew on her son Kobi’s head with the marker to cover up a haircut style. She said the school administrators told her the haircut could be considered “gang-related.” The haircut featured a shaved line in what was the hair part on his head. It looked like a deeper part in the hair. 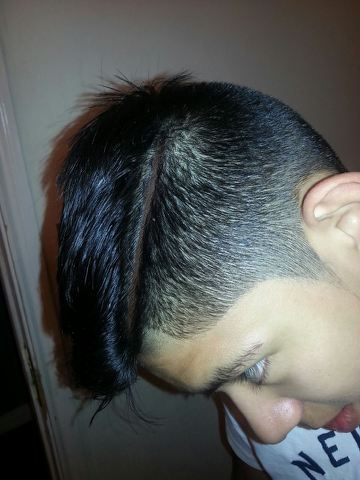 The assistant principal apparently determined this was a dress code violation on February 19 when the hair part was inked in. Esquival also told local Lubbock news station FOX34-News that she was very upset that the school “failed to notify her about the actions of the assistant principal.”

She insisted that she did not raise her son to portray a gang image. She said, “My son is not in a gang, he’s not trying to be in a gang.” Esquival also stated that her son did not wear “loose pants” to school, clothing which is associated with the gang style of dress.

Plainview ISD’s Executive Director for Administrative Services, Greg Brown did not deny the incident happened, according to FOX34. Although he did not speak to the news media, he released a statement about the situation:

“I can’t comment on the details of the specific incident you mentioned due to confidentiality. Our dress code prohibits designs shaved into the scalp and this includes lines. The dress code is a part of the Parent/Student handbook that is made available to all students online and in paper form (if requested). Each year in the spring and early summer the handbook is edited and developed to get it ready for the next school year. The dress code is specifically looked at by the administration who makes any changes that need to be made. In its final recommended form, the handbook is presented to the School Board for approval, usually in July.”

Concerning the act of the assistant principal just taking the liberty to press a permanent marker to a minor’s head, Brown said any actions taken in addressing this will remain confidential.

“I can’t comment on it, but I can tell you whenever we have a concern, Plainview ISD addresses those concerns with our administration and our staff and our students. Any concerns or practices that affect our kids will always be addressed. We encourage parents to communicate with us whenever concerns arise.”

The district’s middle school handbook outlined among its restrictions that “no designs are permitted” including body art, tattoos, any kind of writing on the student, Mohawks and “no designs shaved into the scalp,” nor is any “party color hair” allowed.

According to KCBD-TV, Esquival said, “When I got copies of the dress code, on there it says, designs shaved through the head, but I said it’s not a design, it’s the haircut. The style that’s coming out is the comb over.”

Esquival believed that her son’s haircut complied with the dress code and that the district’s policy should be updated.

KCBD also reported that Esquival spoke with administrators and they will allow Kobi time to grow his hair out to cover the shaved line.

This was not the first time a Texas administrator put a marker to the head of a student. In 2011, East Texas junior high school student Sheldon Williams said that a sharpie was used to color in hair on his head, which the Huffington Post reported.

Williams had two areas on his head where the shave was closer than on the rest of his hair and school officials deemed it a Marshall ISD dress code violation, which also prohibited “designs shaved into hair,” KSLA-TV reported.

“She said we’re not supposed to have two parts, we can only have one,” Williams told KSLA. “I was kind of mad cause I don’t want no sharpie marker in my hair.”

Williams told the local Longview news media outlet that his hair had been shaved into that style for some time prior to it becoming an administrative issue.

Like Esquival, Williams said she did not receive notification before school officials took the matter into their own hands by coloring with a sharpie onto her son’s scalp. Williams called the failure to inform disrespectful. The school’s principal said it was her understanding that this was how similar violations were dealt with in the past, but regretted not calling Williams’ parents.

Last year, another hair violation occurred in Florida, according to NBC-2 where a Lehigh Acres middle school counselor shaved a student’s head because he believed the 11-year-old’s hair was a distraction and could be considered gang related.

According to the American Civil Liberties Union (ACLU), “The right to choose a hairstyle is in some ways more important than the right to dress as one likes, because hairstyles are harder to change than clothing.”

They pointed out that the Supreme Court has not ruled on this issue, thus, it remains a matter for the lower courts and in most cases, federal courts have found school grooming requirements to be reasonable. Rules will vary state by state and court by court. They also cited that hair codes, like dress codes can be challenged but require demonstrating that the code is “unreasonable or discriminatory” to get it overturned by a court.

In theory, school dress codes are intended to thwart distractions. Hair styles are not the only zero tolerance related violations on the dress code hit list — T-shirts with logos, saggy and excessively baggy pants, midriff tops and short skirts are among the contraband attire from campuses nationwide.

However, does the crime fit when minors mess up on dress code? Perhaps students better sit down and read their public school dress code policies before the start of each school year and understand the intricacies and nuances of them or they may wind up like a Lamar High School Student in Houston ISD. In 2008, the pupil was sent home for wearing khaki-colored pants.

The school’s policy stated that: “All students must wear a blue or white Lamar polo shirt and only khaki uniform pants and skirts. Decorative stitching and outside patch pockets are not allowed,” according to Digital Journal. It had to be khaki fabric, not khaki-colored.

That same year, Corpus Christi students at Southpark Middle School were “forced to wear an Abstinence T-shirt” for certain violations of their school’s dress code, also according to Digital Journal. They noted that on the front of the T-shirt was a giant letter “A”, which resembled the marking of the 17th-Century scarlet letter that stood for adulterer. The back gave 10 reasons to remain abstinent.

An untucked shirt led to a three-day suspension for a New Mexico 12-year-old who was described as a “good student and not a trouble maker,” according to KOAT-7.

Similar to Esquival and Williams, this parent was never notified either. At the time, the school said it was their “right to set their own policies.”

Last year, a 15-year-old newcomer to a Florida high school found herself unknowingly out of compliance with a skirt length. She was off by an inch, according to the Washington Post. In response to the mistake, she was sent to the nurse’s office and instructed to put on a “dress code violation outfit” that her mother described as a “shame suit,” ABC reported.

Philosophically, is it okay that a public school official shames a student, who is a minor, or holds a magic marker to his or her head to fix a bad hair day?