What started as a protest by pro-life Texas legislators on abortion provider Planned Parenthood’s Day at the Capitol revealed some tensions between Republican legislators as the 84th Legislative Session hits its stride.

When Wednesday, March 11, was announced as Planned Parenthood’s lobbying day, Texas Right to Life (TRL) worked with pro-life legislators, according to TRL’s Director of External Relations, Melissa Conway, who spoke to Breitbart Texas on Thursday. As Planned Parenthood’s lobbyists and activists gathered at the Capitol to advocate for their agenda, pro-life legislators and activists wanted a way to push back on that message, and a number of legislators ended up displaying signs that identified them as a “Former Fetus.”

Conway said that what specifically inspired the idea for the signs was a bill filed by Rep. Jessica Farrar (D-Houston), HB 708, which would amend the abortion statutes to replace the words “unborn child” with “embryo or fetus.” Conway said that this type of language, using “dehumanized words,” is part of the strategy of the pro-abortion groups.

“Several legislators told us they wanted to do something to show the humanity of the unborn child,” said Conway, “to remind people of the value of life.” She told Breitbart Texas that they created display signs for “any legislator who is self proclaimed to be pro-life and who has reflected that through their voting record or campaigned on that issue.”

Rep. Jonathan Stickland (R-Bedford) put his sign on the placard to his office door, posting a photo on his Facebook page with the comment, “Today Planned Parenthood is visiting and lobbying the Capitol. In honor of their visit, I put this sign up on my office door. Organizations that murder children are not welcome in my office. #prolifeandproudofit.” 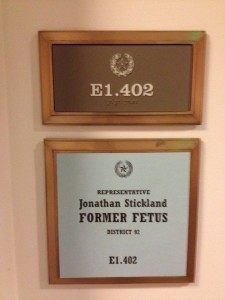 It was Stickland’s choice to display the “Former Fetus” sign on the door placard that sparked a dispute with Rep. Charlie Geren (R-Fort Worth), who chairs the House Administration Committee. According to a report by The Texas Tribune, Geren removed the sign from Stickland’s door, citing a violation of the State Preservation Board’s rules for the Capitol.

However, as the Tribune noted, Stickland and Geren had differing accounts regarding exactly how the sign was removed. “It’s just been ripped down and thrown in my staffer’s face by Charlie Geren,” Stickland told the Tribune. “I thought it was absolutely handled in the wrong way. I wish Rep. Geren was more professional about it instead of intimidating my staff.” Stickland had also posted a tweet saying that Geren had ripped down his sign.

My #prolife sign was just ripped down by @charliegeren #txlege

Geren denied that he had ripped the sign down, saying that he had simply removed it. “If Stickland wants to act like a child, that’s fair, but I did not rip it down,” Geren said. Geren also tweeted, “Signs are not allowed to be posted in the walls of the building [so] they were removed and placed in the office of the members.” Blogger Adam Cahman interviewed Stickland about the controversy on Wednesday afternoon for AgendaWise:

In the interview, Stickland said that about ten minutes after he put up the sign, “Rep. Geren himself came down from his office, I’m not sure how he knew about it, but came and ripped our sign down from the front of our office, opened the door, came in, and began to get very, very aggressive with my staff,” including yelling at one of Stickland’s staffers, an 18 year old female, and throwing down the sign. Stickland also noted that Geren’s office is in the main Capitol building, on the other side of the premises from Stickland’s office in the Capitol Extension.

Stickland said that he was back in his office at the time and had heard the commotion, but by the time he got out front, Geren had left, and “had shut the door very loudly behind him.” Stickland described his staff’s reaction as “frazzled” and “flabbergasted” at Geren’s “aggressive” attitude. He said reposted the sign on the inside of the glass door of his office and then later spoke to Geren, asking him to come directly to him with matters like that. Stickland told Geren that he had upset his staff, but Geren responded that he did not care, and “they can get over it.”

That comment by Geren, said Stickland, was what motivated him to go public with the dispute. “At that point, after trying to resolve it with him, I said, you know what, if he’s going to be this way, and this is the way that he’s going to act, then I’m not going hold back or try and protect him from the story,” he said, “I thought [the way he acted] was inappropriate. So as the press started to call…I told them the truth.”

The bigger picture, continued Stickland, was that the legislative session was getting to the point where actual work had to be done, not just passing feel-good resolutions and “patting each other on the back,” and there were going to be a number of issues — including abortion — where the House leadership and conservative Republican legislators would find themselves at odds.

As Breitbart Texas previously reported, pro-life advocates have expressed concerns about the leadership of House Speaker Joe Straus (R-San Antonio), citing his past support by Planned Parenthood and NARAL, and the failure of a number of pro-life bills to make it through the committee process. As Speaker, Straus has complete control over the appointments of committee chairs and members, including selecting Geren to not only lead the Administration Committee, but also having him serve in past sessions as the chair of the powerful Calendars Committee, through which all bills must pass before being brought to the House floor for debate and a vote.

“They can no longer hide behind the process, and they’re going to have to start exposing themselves to where they stand on the issues and the things that I have seen and I know that are going on behind the scenes to stop and kill conservative legislation is now about to be out in the open,” said Stickland. “They can kill conservative legislation…but they are no longer going to do it quietly. They are going to be exposed [and] we are going to tell the story because people in Texas deserve to know what their legislators are really doing down here in Austin.”

Stickland made similar comments in an interview with the Austin American-Statesman, noting that “I think the Kumbaya is about to be over,” as substantive bills are brought forward for committee hearings and floor debates. If conservative bills fail to get serious consideration, said Stickland, “we are about to start cutting each other to shreds.”

#ProLifeStrong members proud to show signs for @PPact Day. Sad that signs are being torn down in #txlege. pic.twitter.com/oaB3OYjMM2

Several staffers joined the “former fetus” movement as well. Christopher Paxton, Shaheen’s Chief of Staff, had a sign of his own made that said “Former Fetus and proud of it.” 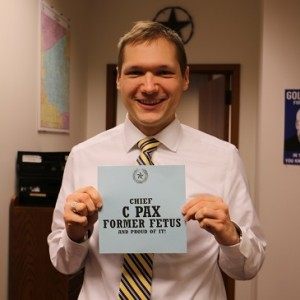 Rep. Matt Rinaldi (R-Irving) posted his sign with a tongue-in-cheek Post-it note declaring that it had been “posted by a disobedient staffer,” but then signed the Post-it Note himself.

As expected, many abortion supporters mocked Stickland and the other pro-life activists on Twitter — the Statesman collected a number of social media reactions in a Storify page — but the pro-life legislators showed no signs of being bothered by the criticism. Stickland was far from the only legislator on Wednesday drawing battle lines over pro-life issues. “Conservative legislation might die [this session],” Leach told the Statesman, “but it’s not going to die quietly.”

As for Stickland, he remains undaunted, tweeting on Thursday afternoon, “You know you are on the right track when the progressive liberals are ripping their hair out on your facebook page.”