The Texas Department of Transportation (TxDOT) is the state’s third-largest agency. Spending on roads and bridges will push past $11 billion this year. But, without a few simple procurement reforms, Texans may miss out on a $1 billion per year in savings.

The traditional government process to build a highway or a bridge is to design it first, with the engineering work being done by either government employees or outsourced to contractors. Then, once the design is finalized, invite companies to bid on constructing the design. Depending on whether the design was contracted out, the traditional process is known as “bid-design-bid-build.”

The alternative to the traditional process is “design-build.”

In a design-build project, one contractor is responsible for both the design and the construction of the job with potential savings as much as 29 percent over traditional contracting with 14 percent in average time savings.

Design-build procurements can be used in a variety of circumstances. They have been linked by some opponents to toll roads or public-private partnerships (PPP). Design-build is not limited to these uses; just as such projects can be completed through traditional procurement methods as well.

In spite of the cost savings, the Legislature has increasingly placed restrictions on the use of design-build contracting at TxDOT.

In 2011 during House debate on the TxDOT sunset bill, a floor amendment was proposed that required TxDOT to provide 30 percent complete designs as a precondition before asking for design-build bids. It passed over the objection of seven House Republicans. Because much of the cost savings from design-build comes from contractors proposing and implementing innovative designs, this new requirement severely reduced the potential savings—it was akin to half baking a cake before handing it off to a different chef to finish.

In another restriction placed on TxDOT in 2011, the agency was held back from doing no more than three design-build contracts per year with a value of not less than $50 million each. The three per year limit expires this August.

SB 1294, introduced this year, would make the three per year design-build limitation permanent while raising the value floor to $250 million from $50 million, further hobbling the use of design-build contracting to save taxpayer money.

In Texas, the $987 million DFW Connector Project used design-build which shaved a year off of the expected timeline vs. the traditional bidding process, compressing the effort by 43 percent. This saved $43 million in construction inflation while allowing 180,000 cars to use the DFW Connector earlier than they otherwise would have, saving a somewhere between 8.2 million and 11 million commuter hours by opening ahead of schedule for a total savings in excess of $60 million.

McKinsey & Company, a U.S.-based worldwide consulting firm estimates that design-build can save up to 29 percent on a large, complex project.

A study by the Arizona Department of Transportation looking at 16 projects from $12 million to $184 million over the five years from 1999 to 2004 estimated an average time savings of 22 percent and a dollar savings of 4 percent.

A 2009 Utah study indicated that change orders resulted in 6.5 percent of costs in design-build projects vs. 14 percent using the traditional method. The Utah study further noted that traditionally-run projects saw an average cost overrun of 11 percent, a cost borne by taxpayers, as compared to no cost overruns using design-build.

In Florida, a variation of design-build was used for highway safety projects called design-build push-button. The work included a wide-range of road projects including the adding a paved shoulder to a road, guardrails, traffic signals, crosswalks, skid-resistant pavement and other items. Project timelines were compressed 25 months and the savings to taxpayers hit 30 percent. Interestingly, these projects were small, under $1 million—an amount far smaller than allowed under current Texas law.

Three bills have been filed this session that would free TxDOT to use more design-build contracts, saving as much as $1 billion per year initially and up to $33 billion over the next 20 years of road building. Those bills are: SB 1606, a bill which would direct TxDOT to do no less than ten design-build contracts per year; and SB 826 and HB 3109, both of which would strike the 30 percent design completion law for design-build enacted in 2011. 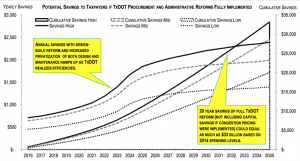 Potential savings from reforms, up to 20 percent on capital costs, add up quickly—up to $33 billion by 2035— if the Transportation Code is amended to allow transportation dollars to be spent most efficiently through greater use of design-build contracting.

With the additional billions of tax dollars going to transportation this legislative session, the fiscally responsible thing to do would be to couple that new money with proven procurement reform at TxDOT, unleashing billions in additional road construction at no additional cost to the taxpayer.

Chuck DeVore is vice president of policy at the Texas Public Policy Foundation. His new study on Texas’ transportation needs is titled The Road Forward. He was a California legislator from 2004 to 2010.