The Purple Heart medal was finally presented to 47 wounded soldiers, civilians and to the families of those who were killed in the 2009 massacre at Fort Hood. Under cloudy and cool Texas skies, Fort Hood had a day of honor and recognition for the survivors and the dead and those who were wounded by Major Nidal Hassan in the worst terrorist attack on a military base in the United States.

Lt. Gen Sean McFarland, the Commander of III Corps and Fort Hood and Secretary of the Army John McHugh, presented Purple Hearts and the civilian counterpart, the Medal for the Defense of Freedom, to most of the 32 wounded and families of the 13 killed.

On hand for the ceremony were members of Congress who pushed for the legislation instructing the Army to award the medals almost five and a half years after the attack. They included U.S. Representatives. John Carter (R-Round Rock), and Roger Williams (R-Austin), and Senators John Cornyn and Ted Cruz. Texas Governor Greg Abbott was on-hand to pay his respect.

“For more than five years, we have fought this Administration to get the victims of this horrific terrorist attack the benefits and honor they deserve,” Carter said in a statement reported by the Dallas Morning News. “On Friday, they will finally receive those honors. My colleagues in the House and Senate have been a big help in getting this through the National Defense Authorization Act and I am thankful for their commitment to these deserving patriots.” Carter, whose district includes Fort Hood, spearheaded the effort for the award of the medals.

“After years of waiting, I’m happy to see the day finally come for the victims of the 2009 Fort Hood terrorist attack and their families to get the recognition and honor they deserve,” Senator John Cornyn said in a statement.

“We are grateful that the U.S. Army has chosen to bestow the Purple Heart and its civilian counterpart, the Medal for the Defense of Freedom, on these heroes,” Cruz said in a statement today, “It is well past time for them to receive these awards and I thank the Secretary of the Army for reaching this determination.”

“Texas is proud to be the home of Fort Hood. Texas is a state that deeply embraces the men and women who wear the uniform of the Unites States Military,” said Governor Abbott in a statement obtained by Breitbart Texas. “We are honored that we have the opportunity to recognize these men and women. It is a shame that this day even has to occur. It is a shame that we have military men and women that fight for our freedoms overseas against terrorism only to come home and be the victims of terrorism on their own bases. It’s essential that we work as a nation to ensure that no man or woman who wears the United States Military uniform is going to be victimized by terrorism at their own base.”

The ceremony took place adjacent to the headquarters building, with full military honors, including large framed photographs of the dead, the base honor guard, a 21 gun salute, and the playing of taps. 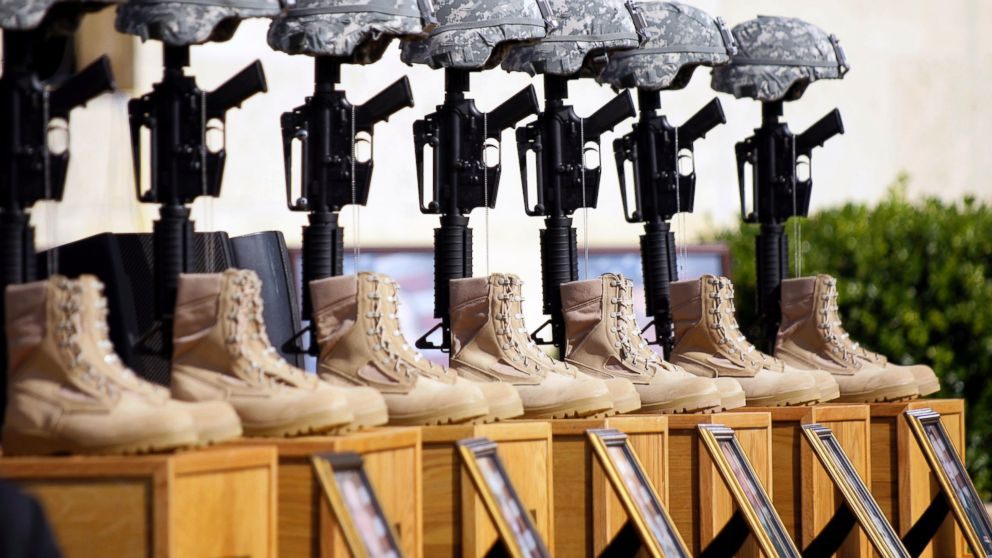 The awarding of the medals is not without controversy. The Purple Heart medal is the oldest of all awards in the U.S. military, picturing General George Washington. The process of awarding the medals to this group has been stalled & delayed since the attack in 2009, and politics played a major role since the White House called the massacre “workplace violence.”

Not every victim has received or will receive full benefits. At least one of the victims, SSgt. Shawn Manning is heading back to a review board to determine the extent of his injuries and disabilities. Manning was hit six times by Hassan’s shots, and still has two bullets in his body. Fox News’ Catherine Herridge did a profile of the sergeant and how he has been ignored by the Army. It is also reported that at least two of the victims have taken their own lives since the incident.

The ceremony which started at 9AM was carried in segments on Fox News, but not on CSPAN, MCNBC, CNN or HLN. Texas stations streamed the video, as did the Fort Hood public affairs office.

There was another, smaller medal ceremony in Nov. 2010, a year following the attack, where medals were awarded to civilians wounded and killed in the attack, and Secretary of the Army Medals of Valor awarded to the police officers who were wounded.

Major Nidal Hasan was paralyzed from the waist down during the shooting, and was convicted of murder and sentenced to death in August 2013, and remains at the military prison at Fort Leavenworth, Kansas.  The date of his execution has not been set.