DiMartino was severely injured in the 2013 bombing when she was watching the marathon with her 5-year-old son. She was a single mother at the time and was dating Pete DiMartino. She went to Boston to watch his mother run the Boston Marathon.

Pete DiMartino lost most of his Achilles tendon in his right foot and suffered broken bones, burns, and other injuries. Her son Noah, had shrapnel in the back of his head and a bad cut on his leg. Rebekah saw someone die that day.

The DiMartinos were married last spring.

DiMartino’s leg was amputated in November 2014, over a year and a half after she was injured in the bombing. As reported by The Boston Globe,  she was at least the 17th person to lose a leg because of the 2013 bombing. She decided to amputate after 15 operations in Boston and Houston.

DiMartino fought a long battle to try to keep her leg but the constant pain interfered with her life with her husband and her 7-year-old son. Her leg was amputated just below the knee.

In April 2015, the five-month amputee pinned an article for Runner’s World magazine entitled “Getting to the Starting Line Is a Victory.” In it, she told about the 56 days her mother stayed with her in the hospital. Every time she had surgery, her mom had to walk by the room of the captured brother of the bomber.

Her mother took her 27-year-old daughter into her home for a year. She cared for her as she screamed in pain when wounds were wrapped, and she bathed her daughter because she could not bathe herself.

DiMartino testified against the Boston Marathon bomber, Dzhokhar Tsarnaev, on March 4th of this year. After she testified on the first day of the trial, she wrote him a letter and posted it on her Facebook page:

My name is Rebekah Gregory. We don’t really know each other and never will. But over the last two years, I have seen your face not only in pictures, but in almost every one of my nightmares. Moments before the first blast, your stupid backpack even brushed up against my arm, but I doubt you remember because I am no one to you. A complete stranger. And although I was merely just a blip on your radar, (someone that happened to be standing 3 feet from your designated “good spot” for a bomb), you have been so much more to me. Because you have undoubtedly been my source of fear since April 15th, 2013. (After all, you are one of the men responsible for nearly taking my child, and for the permanent image embedded in my brain of watching someone die.) Up until now, I have been truly scared of you and because of this, fearful of everything else people might be capable of.

But today, all that changed. Because this afternoon, I got to walk into a courtroom and take my place at the witness stand, just a few feet away from where you were sitting. (I was WALKING. Did you get that?) And today I explained all the horrific details, of how you changed my life, to the people that literally hold YOURS in their hands. That’s a little scary right? And this afternoon before going in, I’m not going to lie..my palms were sweaty. And sitting up there talking to the prosecution did make me cry. But today, do you know what else happened? TODAY…I looked at you right in the face….and realized I wasn’t afraid anymore. And today I realized that sitting across from you was somehow the crazy kind of step forward that I needed all along.

And I think that’s the ironic thing that happens when someone intends something for evil. Because somehow, some way, it always ends up good. But you are a coward. A little boy who wouldn’t even look me in the eyes to see that. Because you can’t handle the fact that what you tried to destroy, you only made stronger. And if your eyes would’ve met mine for just one second, you would’ve also seen that what you “blew up” really did BLOW UP. Because now you have given me (and the other survivors) a tremendous platform to help others, and essentially do our parts in changing the world for the better.

So yes…you did take a part of me. Congratulations you now have a leg up…literally. But in so many ways, you saved my life. Because now, I am so much more appreciative of every new day I am given. And now, I get to hug my son even tighter than before, blessed that he is THRIVING, despite everything that has happened. …

DiMartino crossed the finish line of the Boston Marathon in a wheelchair in April 2014. One of the nurses who took care of her after the bombing was with her holding her hand. 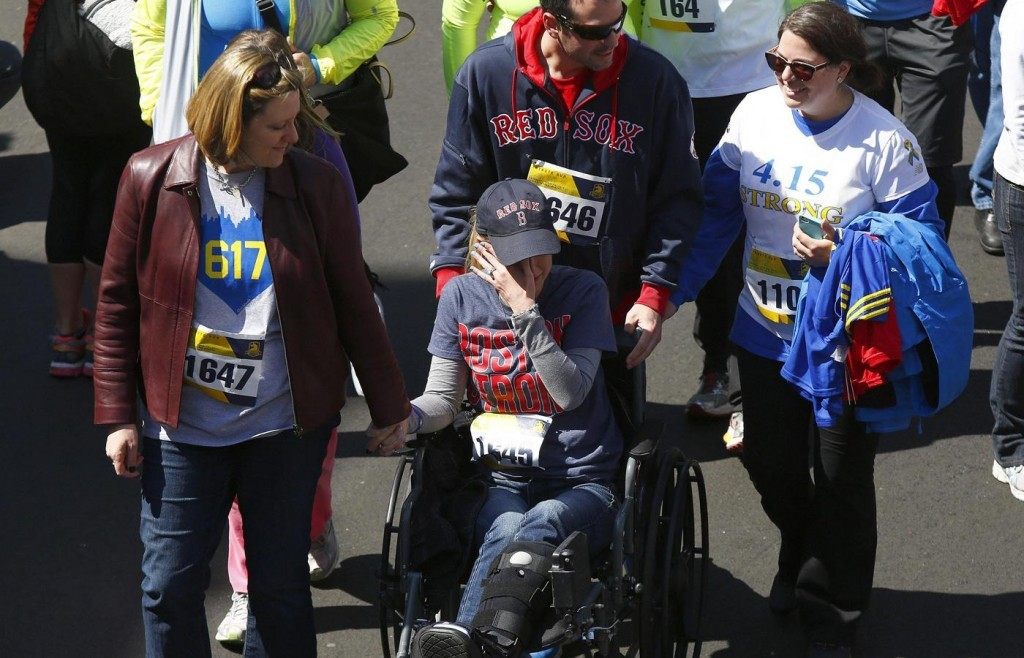 DiMartino says she is training for a full marathon. In addition to her marathon training, she works as a motivational speaker who is available for speaking engagements.