Breitbart Texas has learned that a U.S. Customs and Border Protection (CBP) helicopter was shot down or forced to initiate an emergency landing in Laredo, Texas due to receiving gunfire from the Mexican side of the border. The helicopter was interdicting a narcotics load and working alongside agents from the U.S. Border Patrol, who operate under the umbrella of the CBP. The helicopter was operating in the Laredo Sector of Texas, immediately across the border from the Los Zetas cartel headquarters of Nuevo Laredo, Mexico.

The helicopter was in U.S. airspace and participating in the interdiction of a narcotics load coming from Mexico into the United States.

Border Patrol agent and National Border Patrol Council Local 2455 President Hector Garza confirmed that he received unofficial reports on this matter that indicate the information provided to Breitbart Texas by the unnamed federal agent is accurate.

The shooting occurred in an area known as La Bota Ranch, a subdivision of Laredo, Texas. A source who operates under the umbrella of the CBP told Breitbart Texas that the narcotics trafficking event was a well-coordinated operation with individuals participating on both sides of the U.S.-Mexico border. The shooting came from the Mexican side and all individuals fled and got away. The individuals on the U.S. side also got away into the state of Texas.

The Federal Bureau of Investigation released this statement to Breitbart Texas:

On June 5, 2015, at approximately 5:00pm during an operational flight near the Rio Grande River in Laredo, Texas, a US Customs and Border Patrol (USCBP) helicopter was struck several times by ground fire.  The rounds penetrated and damaged the aircraft, forcing the pilot to make an emergency landing.   The pilot sustained no injuries and no individuals on the ground were affected.   USCBP, FBI, Texas Rangers, Homeland Security Investigations and Laredo Police Department responded to the scene.  The FBI has initiated an investigation and will continue processing the crime scene with the Texas Rangers.  Since this is an ongoing matter, no further details will be provided at this time.

A map of the area is below: 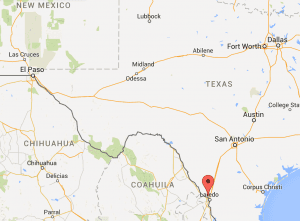 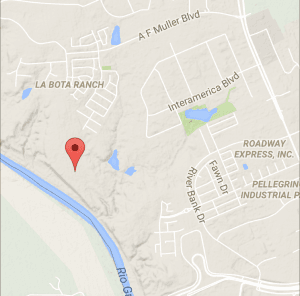 Ildefonso Ortiz contributed to this report.