A video shows how Drug smugglers scale border fences and continue to bring drugs across into the U.S. with little trouble. This disputes the many claims made by top officials within the Department of Homeland Security that the border is as safe it has ever been.

As can be seen in this video published in the Facebook page of the Mexican radio outlet Borderlinea.com.mx, two drug smugglers carrying what appear to be large marijuana bundles were able to climb over the border fence and get away.

Breitbart Texas consulted with law enforcement officials who confirmed that the video was taken at the border fence just south of Nogales Arizona which borders the Mexican city by the same name. The city is located in the Mexican state of Sonora.

The two men climbing the fence resonates with the message delivered by presidential candidate Dr. Ben Carson. The 2016 Republican presidential hopeful visited Arizona. He said the fence in those areas would not keep him out, Breitbart News reported.

While the drug traffickers were able to climb the fence with little to no trouble, just East and West of their location are multiple areas where the fence turns into small Normandy barriers around three feet tall. 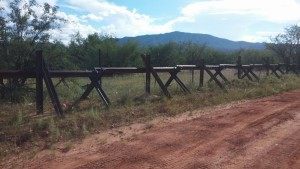 Breitbart Texas has traveled throughout those areas documenting the various spots along the border where security is minimal despite the claims made by top DHS officials.