HOUSTON, Texas — One night after Deputy Darren Goforth was executed at a Chevron station in Houston, Texas, over a thousand people gathered at the site to memorialize the man who was apparently murdered simply because he wore a police uniform. There was an outpouring of support for Harris County Sheriff Deputy Goforth, and for law enforcement officers and their families. 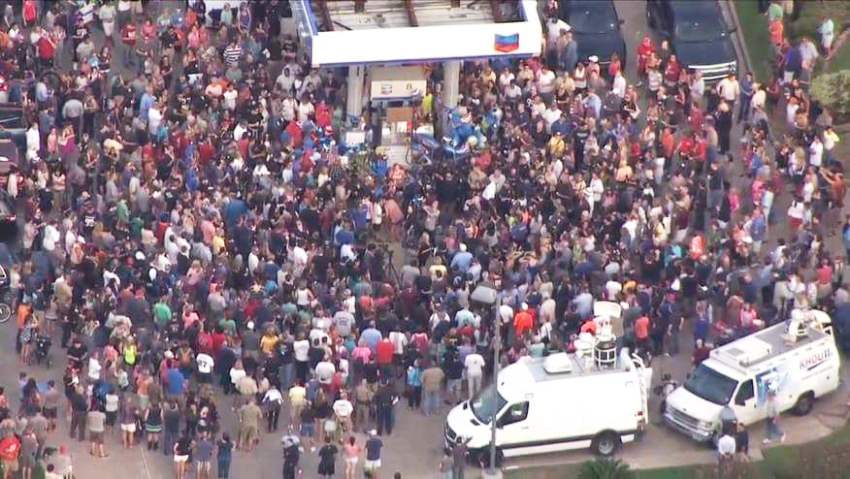 Deputy Goforth was shot execution-style at a gas station on Friday night. The officer was in uniform and was putting gas in his patrol car at a Chevron station in northwest Houston. Witnesses told Breitbart Texas that the shooter shot the deputy in the back of the head and three times in the back.

This brutal killing comes within days of a radio show based in Texas wherein a group of black radicals called for the lynching of whites and killing of cops, as Breitbart Texas reported. 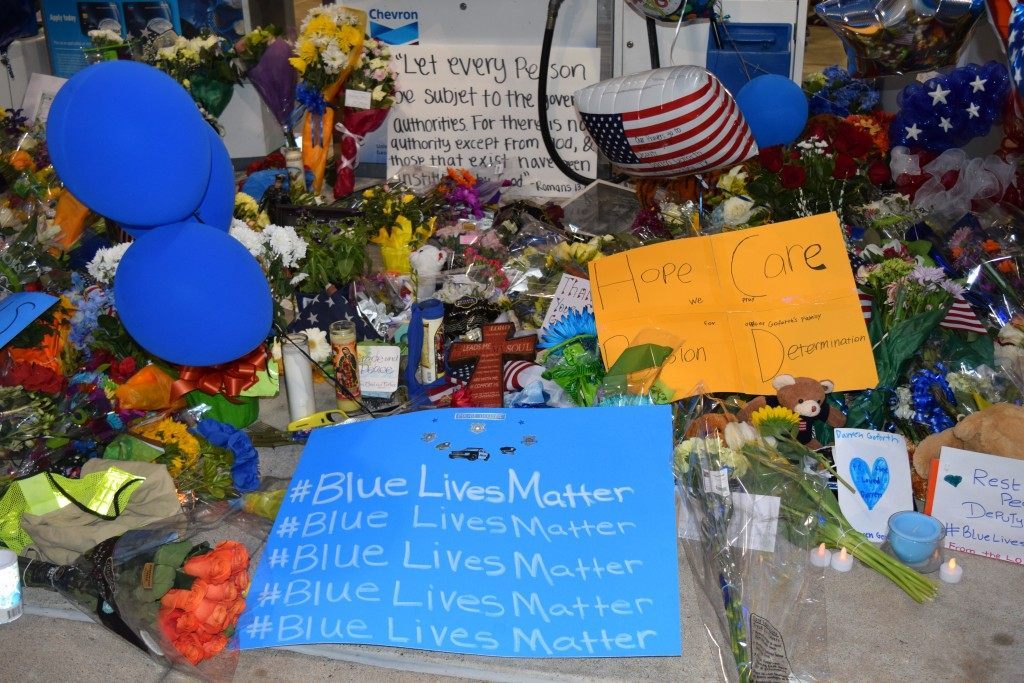 Memorial Tribute to Deputy Darren Goforth at the gas pump where he was assassinated. (Photo: Breitbart Texas/Lana Shadwick)

Breitbart Texas has also reported that the escalation of anti-white and anti-cop rhetoric has been building since militant black activists and the New Black Panther Party members protested at the Waller County jail just 32 miles from the gas station where the officer was killed. Sandra Bland committed suicide in the jail after she was arrested by a Texas trooper. Her death has been the source of intense national attention. As reported by Breitbart Texas, Harris County Sheriff Ron Hickman said, among other things, “This rhetoric has gotten out of control.”

Traffic was backed for several blocks up as people drove by to honor the fallen officer and to look for places to park their car in the nearby residential neighborhoods. 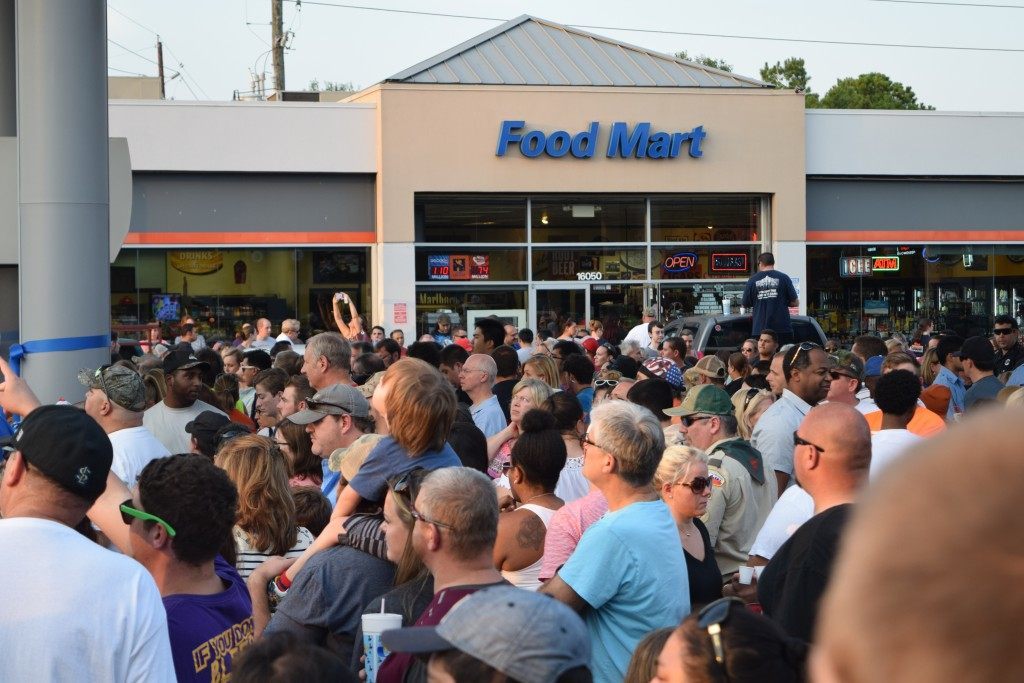 About 1,000 people joined with law enforcement officers from Houston to pay tribute to the fallen deputy. (Photo: Breitbart Texas/Lana Shadwick)

It was a serene environment, where people of all races, expressed condolences to Harris County Sheriff Office deputies for the loss of one of their own. 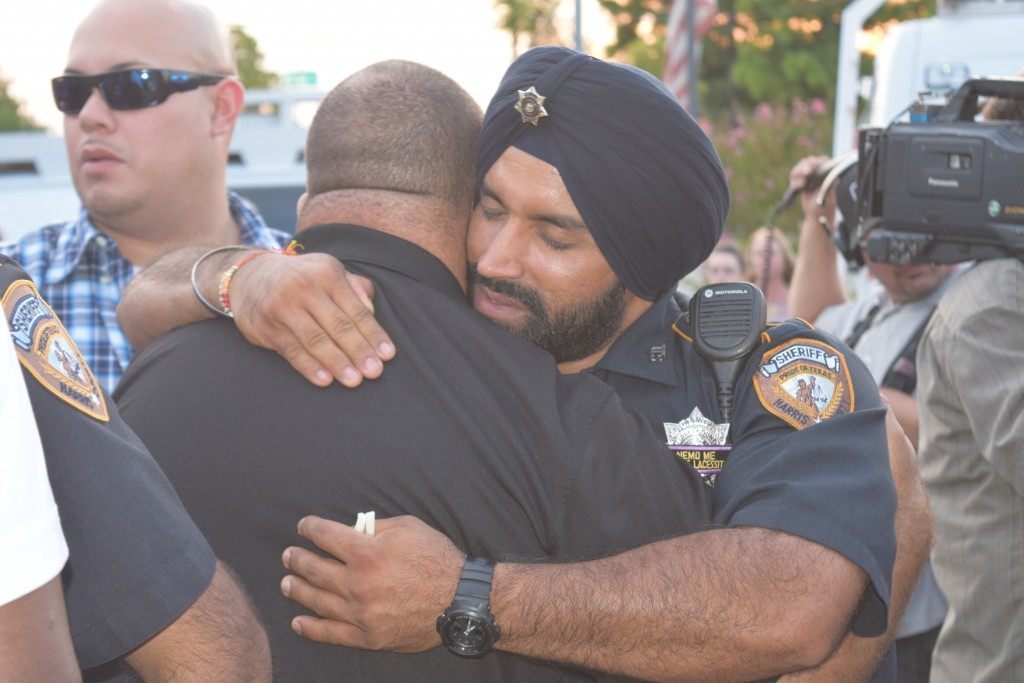 Many officers who hadn’t seen each other in a long time were reunited in mourning. (Photo: Breitbart Texas/Lana Shadwick)

It was apparent on the faces of law enforcement officers, and on the faces of their children and spouses, the sacrifice peace officers make every day. Their family members seemed quite aware of the risk their loved ones take for society. People were at the vigil to not only express their condolences, but to pray that God will give these families protection and peace.

Deputy Goforth was a ten-year veteran of the Harris County Sheriff’s Office. The Deputy leaves behind a wife and two children. An attendee at the event told Breitbart Texas that Goforth was “a gentle giant.” The black man making that statement about his friend, is a 17-year veteran U.S. Army Ranger with seven combat deployments to Iraq and Afghanistan. He said Goforth would always tease him about working out with weights saying, “That stuff will kill you.” He was speaking with Goforth moments before the shooting. 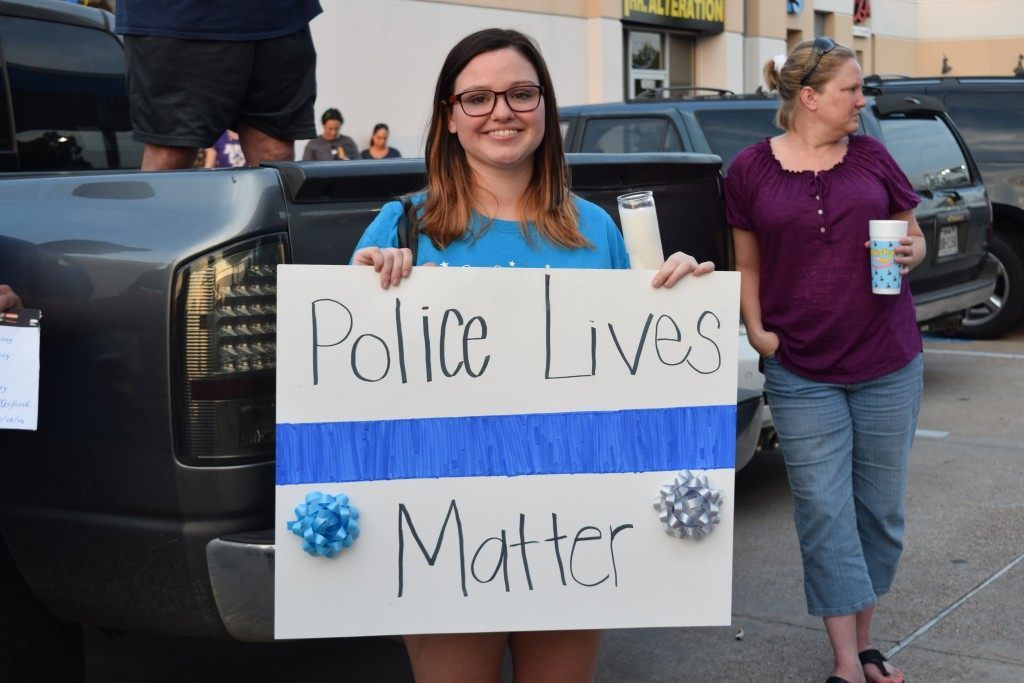 As reported by Breitbart Texas, a witness who saw the deputy being gunned down said, “He was the best guy you can imagine as a friend.” “He was always coming to me and asking if he could do anything for me,” he said. 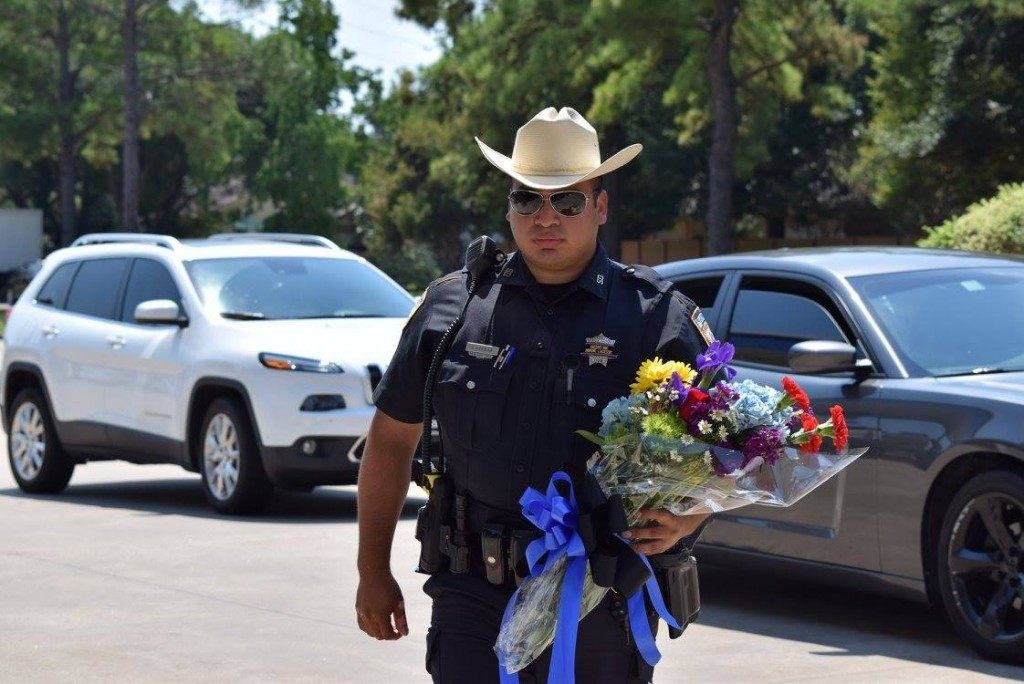 In a statement received by Breitbart Texas, Kathleen Goforth expressed, “There are no words for this. All the language that I know is inadequate for what I want to express. But for Darren, I will try.” I can’t describe him with cliches and platitudes. I need to do better with that; he deserves better than that.” 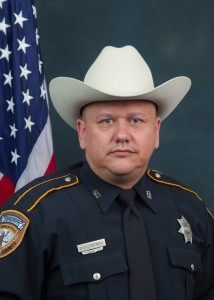 The wife of the slain officer continued, “My husband was an incredibly intricate blend of toughness and gentility. He was loyal … fiercely so. And he was ethical; the right thing to do is what guided his internal compass. I admired this quality, perhaps, the most. For that was what made Darren good. And he was good. So, if people want to know what kind of man he was … This is it. He was who you wanted for a friend, a colleague, and a neighbor.” 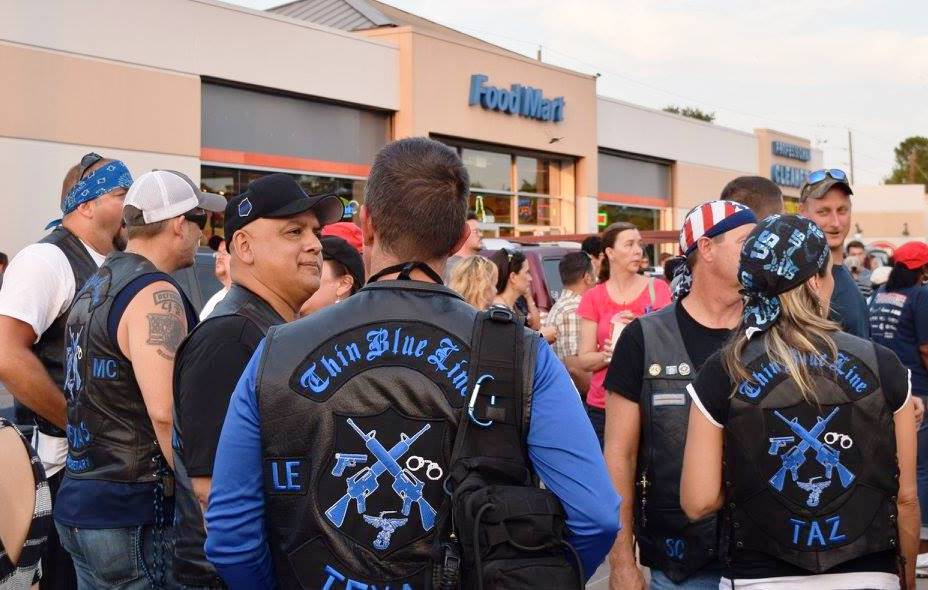 Mrs. Goforth said, “However, it was I who was blessed so richly that I had the privilege of calling him my husband and my best friend.” 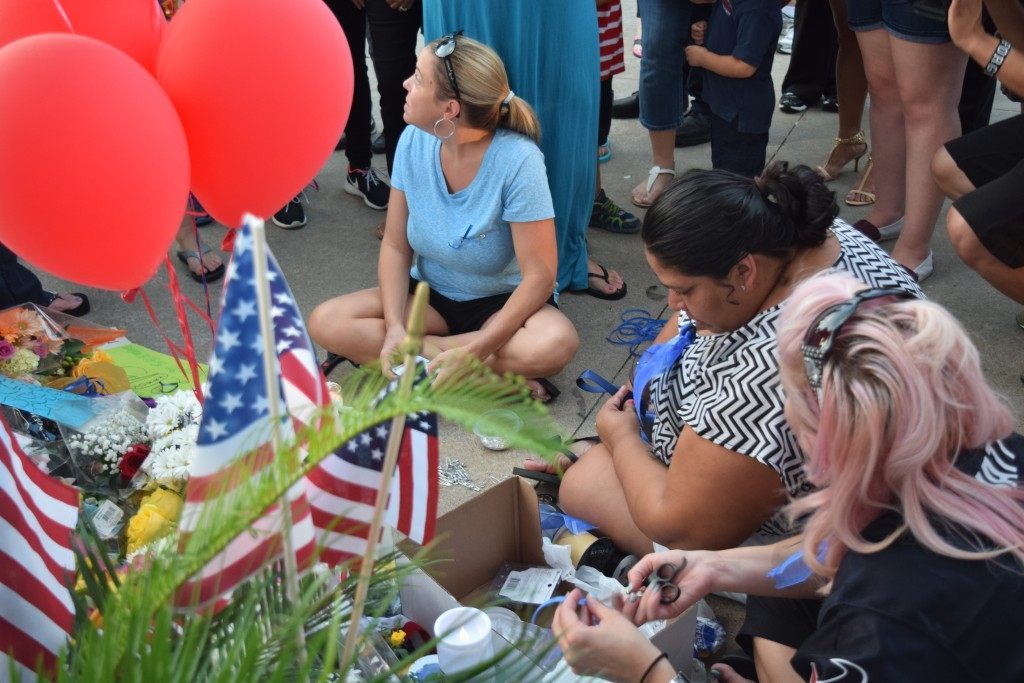 People of all races joined together to share their grief. (Photo: Breitbart Texas/Lana Shadwick)

Breitbart Texas spoke with Harris County Sheriff Ron Hickman who said that over $24,000 was raised to help the family of the slain officer. 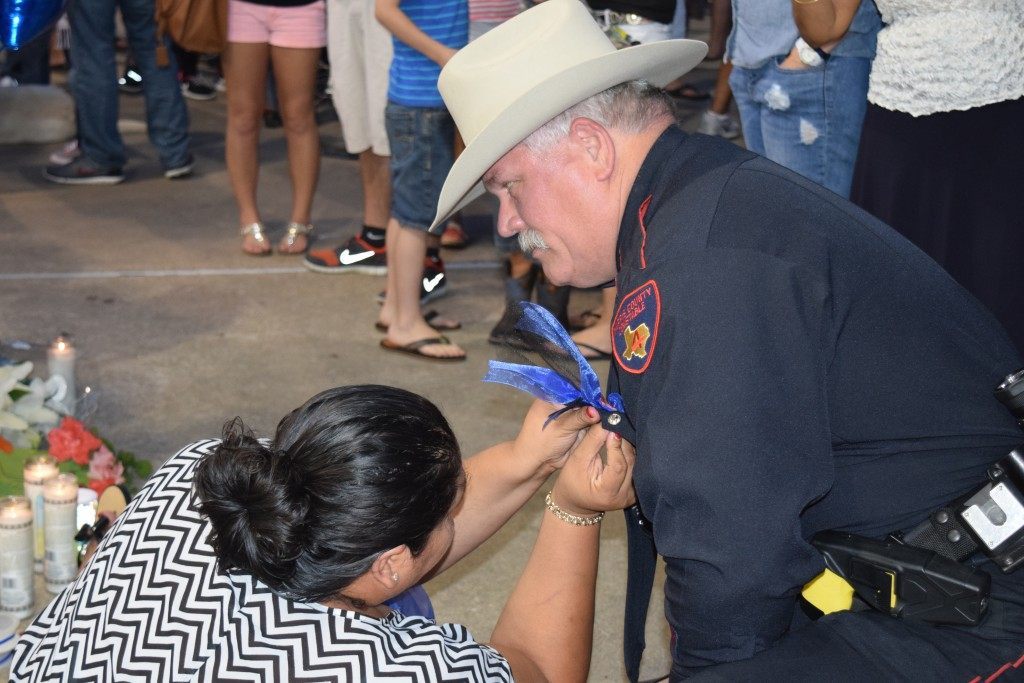 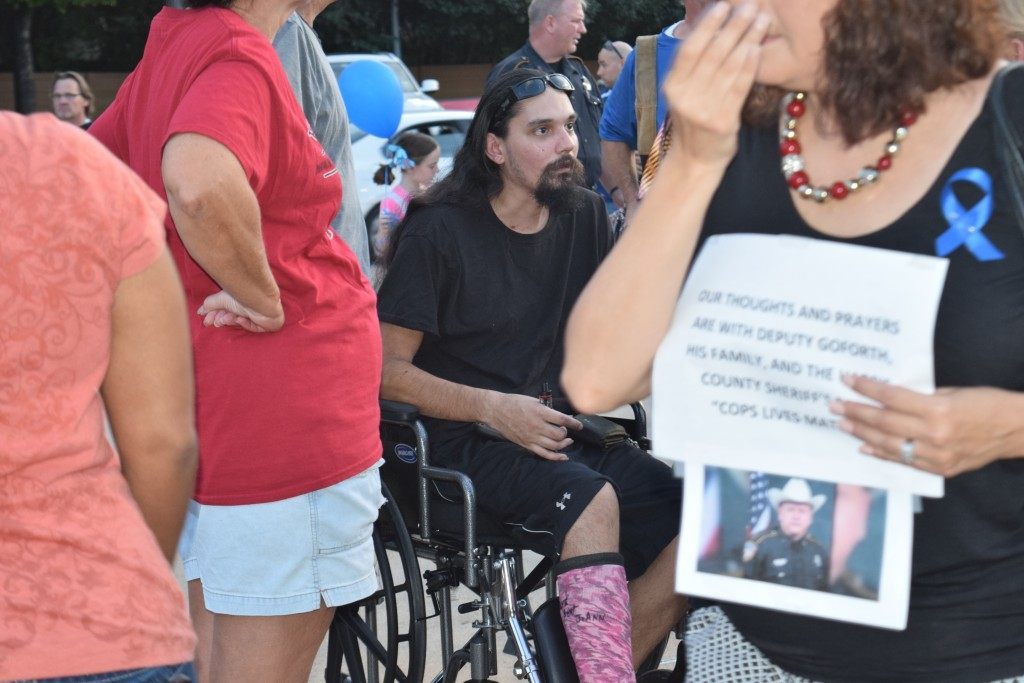 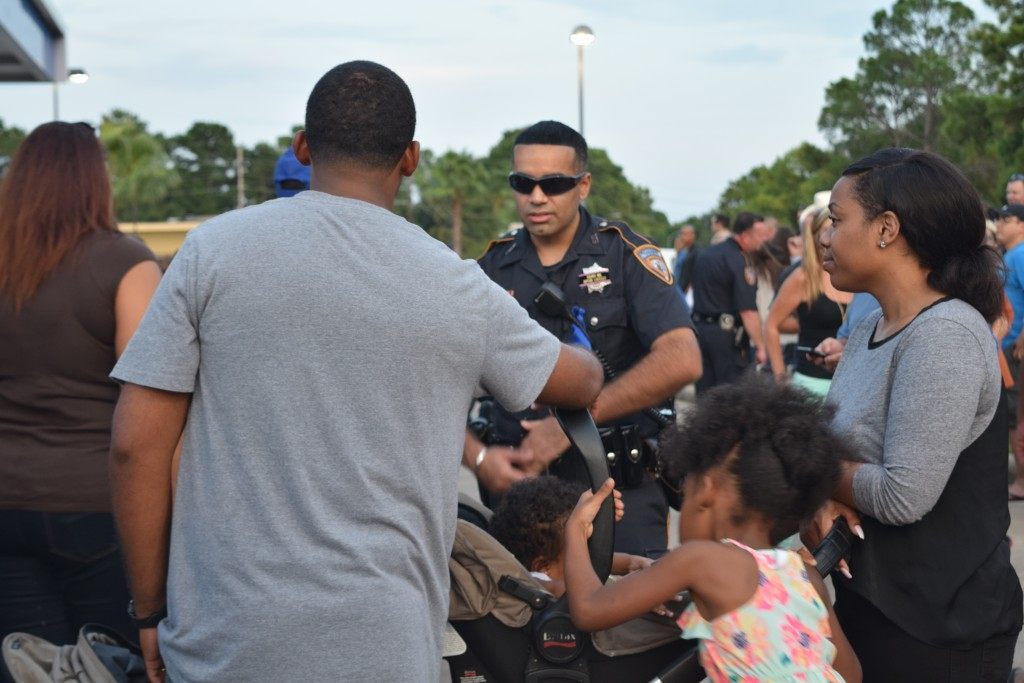 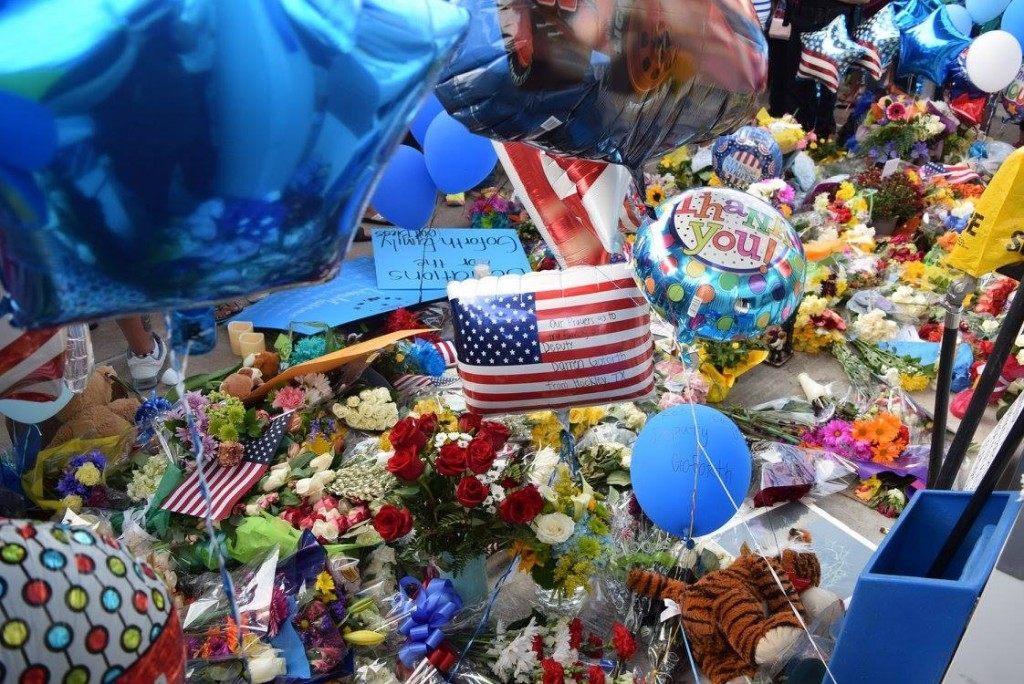 “Our prayers to the family of Deputy Darren Goforth” from Hockley, Texas. (Photo: Breitbart Texas/Bob Price)