HOUSTON, Texas — The man who allegedly killed a pastor and his wife while he was reported to be street racing is in the U.S. illegally, officials say. The illegal alien from Mexico surrendered to the Harris County Sheriff’s Office (HCSO) on Friday morning.

De La Rosa Sosa was wanted in connection with a street racing crash where Pastor Jesse Estrada Sabillon, and his wife, Maria Sabillon, were killed. The couple was driving home Tuesday night after visiting their niece who had just given birth to a baby when they were struck by the truck.

The suspect is reported to have fled the scene following the crash and did not turn himself in until Friday morning at about 10 a.m. local time.

He was allegedly driving a 2006 Chevy pick-up truck and was said to be racing with dark colored Dodge Challenger or Charger, the Houston Chronicle reported on Wednesday. The two vehicles were said to be racing along the Sam Houston Tollway feeder road when De La Rosa Sosa is reported to have run a red light striking the 2004 BMW 330 (pictured above) driven by Sabillon. The couple were both pronounced dead at the scene of the crash. De La Rosa Sosa is said to have fled the scene on foot. The driver of the Dodge fled the scene in his vehicle. 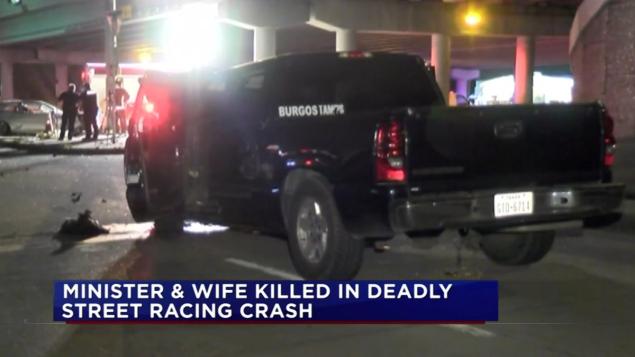 Officials with the Harris County Sheriff’s Office quickly notified the family of the pastor who expressed relief at the news, the Houston Chronicle reported earlier on Friday.

De La Rosa Sosa is currently processing into the Harris County jail and has not yet made a court appearance. He is expected to be charged in connection with the two homicides and fleeing the scene of the fatal accident.