Franklin Graham greeted thousands who were gathered by the south steps of the Texas Capitol in Austin for this stop on his Decision America Tour 2016.

“We know our nation is in trouble,” Graham told the nearly 10,000 people gathered at the state’s iconic capitol building. He continued saying, we are in trouble spiritually, economically, racially, and politically. Graham said he has no hope in either political party, Republican or Democrat, he said his hope is in God.

Graham is traveling through every state in the country he says “to challenge Christians to live out their faith at home, in public and at the ballot box.” He is also sharing the Gospel. 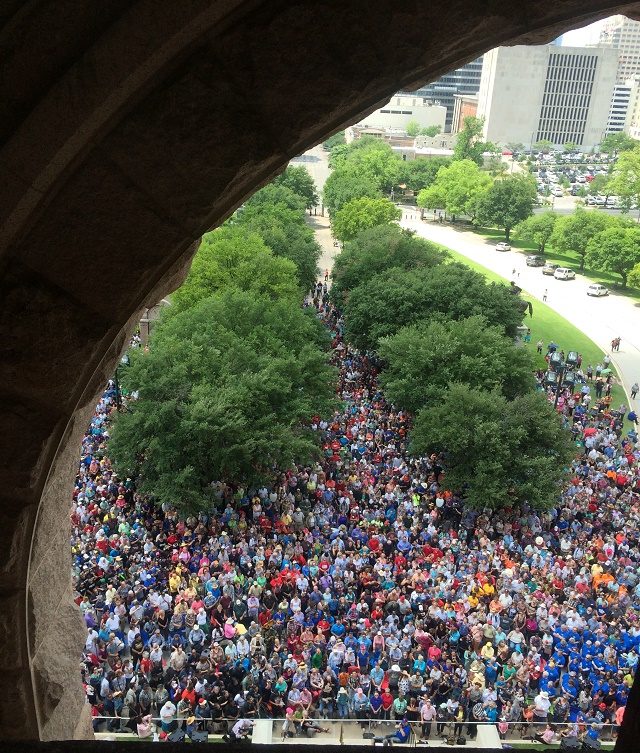 “America’s attention is on this election year, but I do not believe Republicans or Democrats or any other party can turn this nation around—only God can,” Graham said in a statement obtained by Breitbart Texas. Graham serves as president of the Billy Graham Evangelistic Association. “God hears the prayers of his people, so we’ll be calling on Christians in every state to pray fervently and faithfully for America.”

Referring to the LGBT community, Graham said, “There are more of us then there are of them. We need to be dictating the agenda.” 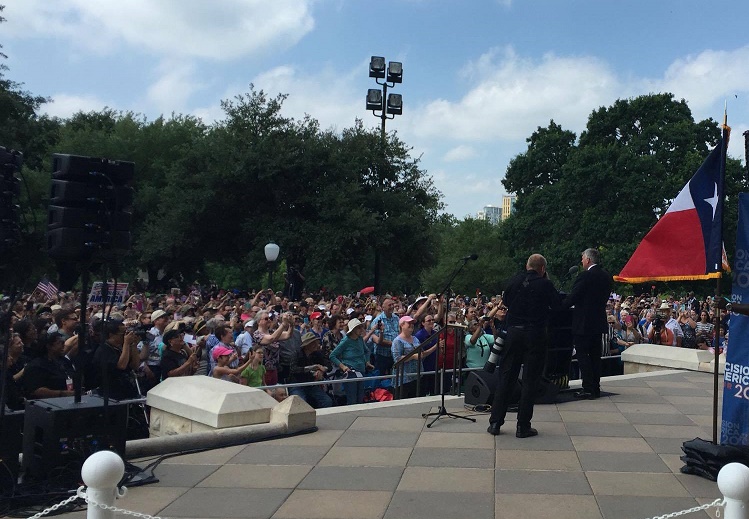 Those gathered also took the time to pray for the governor, lieutenant governor, the attorney general, Texas legislators and others who serve the state. Cameras did not focus upon any elected official in the crowd.

Although the prayer rally was attended by Texas elected officials, and candidates running for office, Decision America Tour 2016 does not endorse political candidates or legislation, and candidates and current public officials are not allowed to speak at any of the rallies.

Graham says that the focus of the prayer rallies is to challenge Christians to pray for the United States and its leaders, and to live out their spiritual walk everywhere they go.

“We need Christians at every level. Boy, do we need them in Washington,” Graham stated.

The evangelical leader took time to preach the gospel of Christ and he asked those there if they wanted to make a decision to accept Christ.

“The enemy is not at the gate. He is already through the gate.” He asked folks to sign a pledge saying they will honor God in public, and at home. The pledge also asked them to sign to pledge to support only biblical candidates, and to prayerfully consider running for elective office if so called. They were asked to text 21777 “America” to sign this pledge. 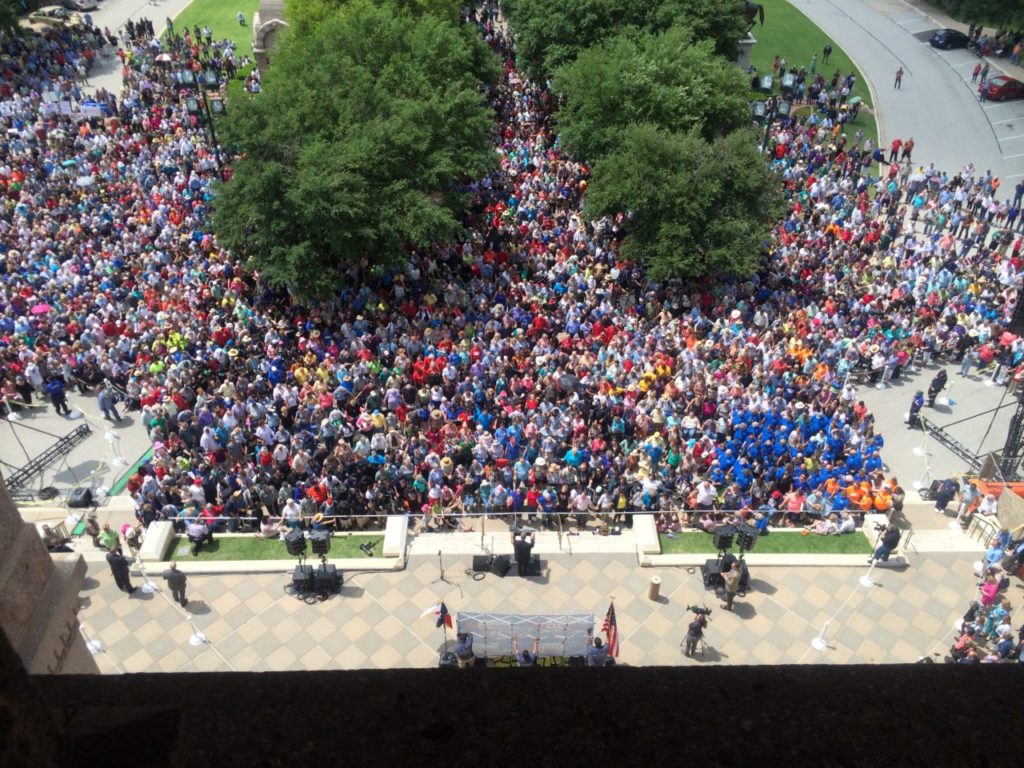 Jonathan Saenz, President of Texas Values stated, “This is a historic day in Texas. Our faith is being attacked and challenged like never before by out of control government officials and people who want to redefine religious freedom. Today we are choosing to humble our hearts before God and committing to pray for our state and our nation. We are choosing to boldly exercise our faith freely in private and in public, a right given to us by God and in our state and national constitutions. We are encouraged so many Texans have come from all over the state to stand, pray, and commit to vote their values in this critical hour.”

Kathy Haigler, Republican Party chairman from Caldwell County, Texas, told Breitbart Texas, “What will make America great again is when God’s people humble themselves, seek His face, pray, and turn from our evil ways. The change of heart we need will not come from an elephant or donkey, but through The Lamb.” 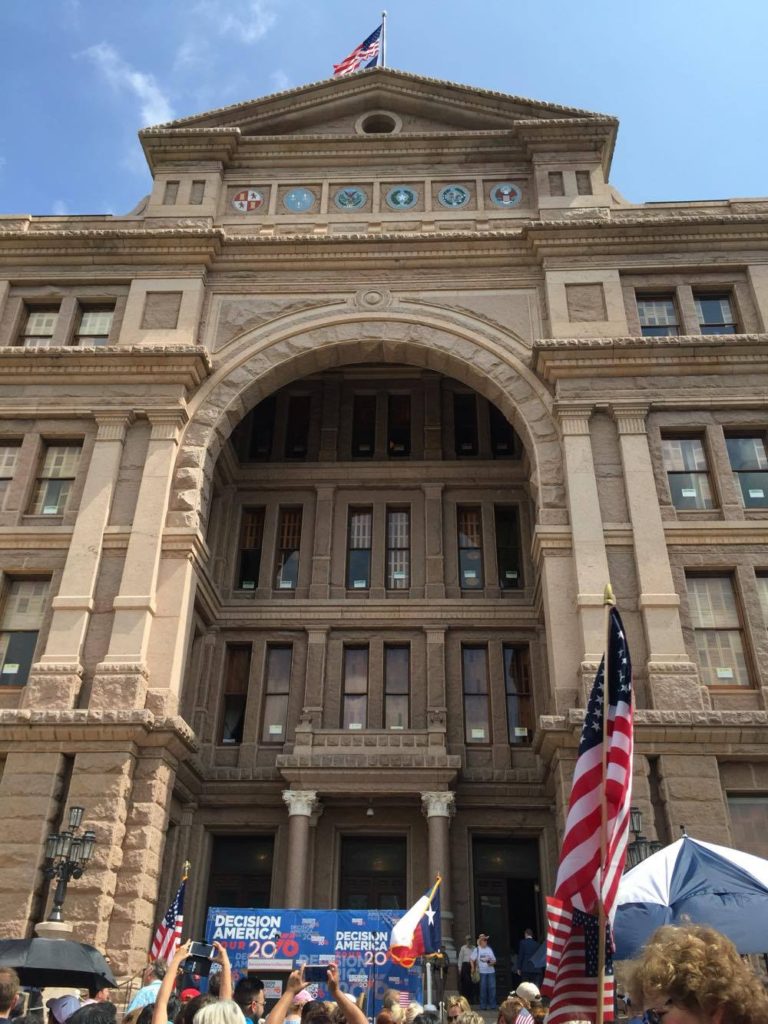 Joe Pojman, Ph.D., executive director, Texas Alliance for Life told Breitbart Texas, “The fact that a million abortions occur every year in this nation, 54,000 in Texas alone, tells us that we need to change laws and change hearts. I believe that is what this revival is about.”

Norm and Jeanie Mason, members of the Sugar Creek Baptist Church in Sugarland, Texas, were at the rally. Norm Mason told Breitbart Texas, “It is great to be here at the capitol in Austin praying for national revival with Franklin Graham.” He added, “As Christians we must recognize that God has given us the opportunity and responsibility to fully engage in the civic process. We need to support candidates for public office who reflect Biblical values and principles in their private and public life. We need to do what we can do, and then trust God to do what only He can do.” Norm is author of the book “The Political Imperative: An Assignment from God.”

Reverend Graham will be in Oklahoma City, Oklahoma on Wednesday, and Topeka, Kansas on Thursday.

A list of all of his tour dates can be found on the Decision American Tour 2016 website.

Note: This article has been updated with additional information and photos from the event.