HOUSTON, Texas — There are many new folks who are now engaged in the political process, and they are asking “What is this mystical delegate and convention process?” They are also asking “What do delegates do at conventions besides voting for a presidential candidate?” County Republican Parties in Texas have been and are providing training and information to demystify this process.

Paul Simpson, Chairman of the Harris County Republican Party (HCRP) told Breitbart Texas, “There are many new people across Harris County who are energized and newly engaged with our Party but have never before attended a convention.”

In fact, folks all over the country are becoming politically active. Angry and disenchanted voters are getting involved.

Simpson admits, “Conventions can be confusing and overwhelming even for long-time activists, so knowing what to expect will help all our delegates better navigate the process. I want the Harris County delegates and alternates to be the best prepared delegation in the State.”

Simpson says that 150,000 new voters voted in the last Harris County (Houston-area) Republican Party primary. It was Harris County’s largest primary ever – more than twice voted than ever before. These folks had never voted in a GOP primary in the county.

A look at the Democratic Party’s primaries and caucuses from 2016 and 2008 also shows that turnout in the nation is significantly down from the last contested election, as reported by Breitbart News.

Some of those who have previously voted Democrat, this time voted for a presidential primary candidate in the Republican primary. It remains to be seen what percentage of these voters are now involved as Republican convention delegates.

I decided to attend one of the convention training seminars put on by the Harris County Republican Party. The meeting was informative, and the Republican Party of Texas Parliamentarian, Butch Davis, helped answer the hot topic of how national delegates will be selected. A run for one of the 155 slots will be competitive, he said. Getting a slot will be all about selling oneself to fellow delegates as the “Cruziest” or “Trumpiest” of the delegates there. Contenders must also be able to deposit $2000 for national convention hotel and other basic costs, and they must do so before they leave the state convention. 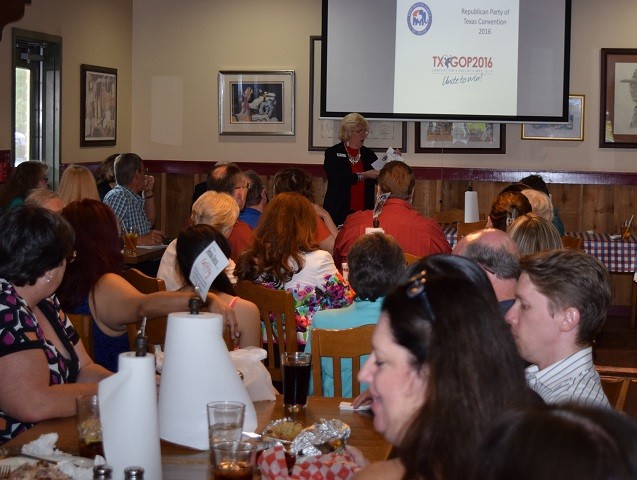 Alice Rekeweg, Senatorial District Chair for Senate District (SD) 4 told delegates what to expect at, and how to prepare for, the convention.

During the meeting, delegates discussed that they needed to read the 2014 Texas GOP Party Platform prior to arriving at the State Convention. Although there will be new planks submitted for a vote, many will remain the same, or be similar.

State Party leaders will adopt both the GOP Platform, and the State Party Rules. Some of the members of these committees will be there for almost a week. They will begin their work on the Monday before the start of the main convention on Thursday. The Platform is adopted from scratch.

As it relates to the Rules, changes to the Rules are adopted. Rules not changed remain in effect. In general, what they do is provide that Robert’s Rules of Order is the parliamentary authority, and they dictate what constitutes a quorum for meetings. They also guide the agenda for precinct, county/SD and state conventions, and regulate how national delegates are elected, and how long their pledge to a presidential candidate lasts.

Another session for those interested in the “mystical” Rules was taught by Republican Party Texas’ (RPT) Parliamentarian Davis. Davis has been a precinct chair since 1981. Former RPT Chairman, Steve Munisteri, spoke to the grassroots over the weekend. Munisteri first got involved with the GOP in high school when he worked on the Reagan presidential campaign.

In Texas, the Republican Party apparatus is a grassroots participation process. The “Establishment,” including Bush cronies, have not been involved in the state or local Party, nor have they been elected to state GOP key committees for decades, since the early 1990’s.

Any vision of this being a bunch of old, cigar-smoking, white oilmen making decisions in a backroom, is simply not how it is done in Texas. Most of the folks are middle-class conservatives who have volunteered for years because they believe in what they are fighting for. More recently, in the last some eight years, “Tea Party” conservatives, and “Constitutional Conservatives,” have become active in the Party. These individuals are also serving as delegates.

Other GOP County Parties have and are putting on their own education and training seminars. The Harris County GOP is not the only County Republican Party to do so.

Tanya Robertson, SD 11 SREC Committeewoman, told Breitbart Texas, “This State Convention there is more information on the RPT website then in the past and it is because of the efforts from the grassroots movement. It is the grassroots that asked that it be posted.”

The GOP Convention in Texas will be held in Dallas, Texas, on May 12-14. This election cycle, the GOP Lone Star State’s theme is “Unite to Win.”

Given the long Republican presidential primary, and all that has come with it (and is probably there for Republicans in the near future), this is going to continue to be a very interesting process.