HOUSTON, Texas — The protest organizer at an Arabic Immersion Magnet School says it is ironic that the seventh largest school district in the U.S. is ignoring the Arabic culture’s “long and ongoing culture of enslavement” while stripping names off of schools of anyone connected with the Confederacy or slavery (and spending millions to do so).

The leader of “Stop the Magnet,” Liz Theiss, also said she does not understand why the school would reroute school buses and parent pick-up routes where protesters were playing the Islamic Call To Prayer. 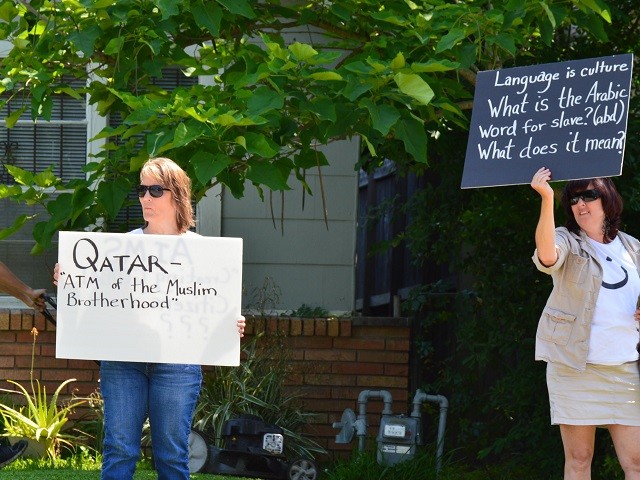 Below is a YouTube video that includes the Call To Prayer and audio of Pat Condell speaking on the issue of “The Taste of Multiculturalism.”

Condell can be heard saying, “Community cohesion. Islam again. Bridge building. Mutual understanding. Everybody focus on  YOU KNOW WHO. ‘Cultural Awareness’ – you’ve guessed it! Would you like a crash course now in ‘Cultural Awareness‘? Here it comes – Islam should get whatever it demands. Full criticism of it is racism. That’s it! You are now as culturally aware as you will ever need to be. Isn’t that reassuring?”

The writer and comedian who was born in Ireland adds, “The word ‘Multiculturalism‘ only exists because of the Religion of Peace. It was invented to cushion the fact that Islam dominates, it doesn’t integrate. We’ve had different cultures living side by side in Britain for years before this religion came.”

One of the protesters at the peaceful protest carried a sign directed to a black HISD board member, Jolanda Jones who has been outspoken on the renaming of schools. It said, “Jolanda, Do you know what ‘clean shaven’ means? #Arabic slaves.” 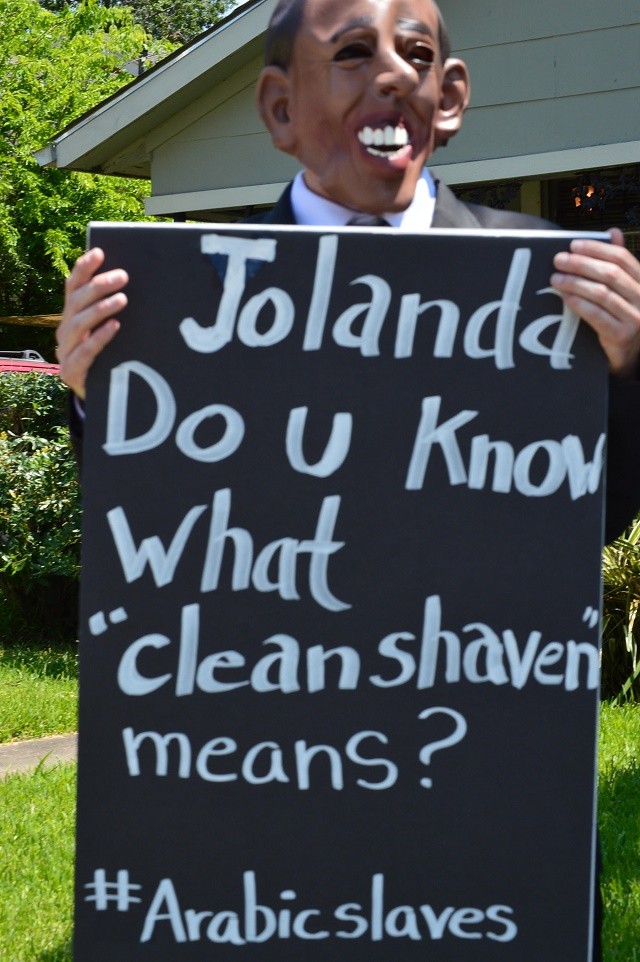 A protester dressed in a dog suit held a sign saying, “Language is culture. What is the Arabic word for slave? (abd) What does it mean?”

The word “abeed” is a derogatory Arabic word for African-Americans and means slave or servant, reports Frontpage Magazine. The magazine reported that there was a campaign in Detroit by a Muslim American group urging their community to stop the “Arabic equivalent for the N-word.”

Theiss said that the protester was wearing a dog suit because of a fatwa by the Islamic State calling for the killing of dogs and puppies of American owners, as reported by The European Times. James Woods tweeted about the event.

Iranian dog owners were facing arrest and 74 lashes if they were caught walking their pets or keeping one in their home. A bill before the country’s parliament provided that having a dog as a pet harms Iranian society because the animals are “unclean,” Breitbart London reported.

“It is interesting that they chose to alter the students pick-up routine over sounds that are commonly heard in Middle Eastern countries, in fact, calls to prayer are already being heard in the United States,” Theiss provided in a statement to Breitbart Texas. “In Hamtramck, Michigan, the call to prayer can be heard five times a day by residents of this once Polish dominant community. Is there a sincere commitment among the Arabic Immersion Magnet School (AIMS) community to support Arabic culture?”

The founder of “Stop the Magnet” says the “sensibilities surrounding slavery” have been ignored once the Houston Independent School District (HISD) was issued a check by the Qatar Foundation. She provided the document attached below in support of her statement.

A Facebook site for those interested in the issue of globalists’ “Multiculturism” and like topics can be found on a page titled “Civilizational Jihad.” Liz Theiss says the term “Civilizational Jihad” which is the focus of the Facebook cover on the page, “refers to the tactics of infiltrating host countries to infiltrate its institutions to eventually spread the Islamic ideology and claim total global dominance through the Caliphate.”

As reported by Breitbart Texas, a  Qatar military official in Texas pleaded guilty to visa fraud for falsifying documents to secure the visas for two women he treated as slaves. His wife pleaded guilty to two counts of misprision of a felony for obtaining the labor and services of these two women by force. Hassan Salem H.M. Al Homoud and his wife, Zainab Al Hosani, a citizen of the United Arab Emirates, were living in San Antonio with their children while Al Homoud was attending military training at Camp Bullis.

The defendants were alleged to have restricted the two workers’ ability to move or travel by withholding their wages, cell phones, passports, and visas, as reported by Breitbart Texas prior to their pleas of guilt. The indictments alleged that Al Homoud kept the workers in primitive conditions and provided limited amounts of food. A San Antonio peace officer discovered the workers. One of them was found on Camp Bullis Road, in what the U.S. Attorney’s Office called “apparent distress.” The officer went to the workers’ apartment and found it was furnished only with a pallet on the floor.

Breitbart Texas reported that HISD voted to change the names of middle schools and high schools in Houston whose namesakes were connected to slavery or the Confederacy. The cost to rename just one middle school will cost almost $500,000.

In December, Breitbart Texas reported about the Arabic Immersion Magnet School when protesters held a “Stop the New Jihad” event. Opponents say that Americans simply do not know what is happening in the school, and in America. They say that Americans and Texans need to become more educated about Islam and their intent to engage in “civilizational jihad” in America. They warn that the Texas school district is planning to expand grade levels in the AIM school every year.

At that time Theiss told Breitbart Texas that “Civilizational jihad is what we feel is a network operating within the U.S. to promote Arabic culture and language and it operates through stealth within the community to create trust.” She says this strategy is listed in the Muslim Brotherhood’s Strategic Plan for North America.