The State filed a motion to dismiss the felony charge noting that a “colorable claim [was] raised regarding whether [the] grand jury investigated new matters after [the] extension order was issued.” A grand jury’s term may be extended by court order but not for new matters to be considered. A grand jury’s term may be extended only for matters already before it. Judge Brock Thomas of the 338th District Court in Harris County signed an order dismissing the charges. 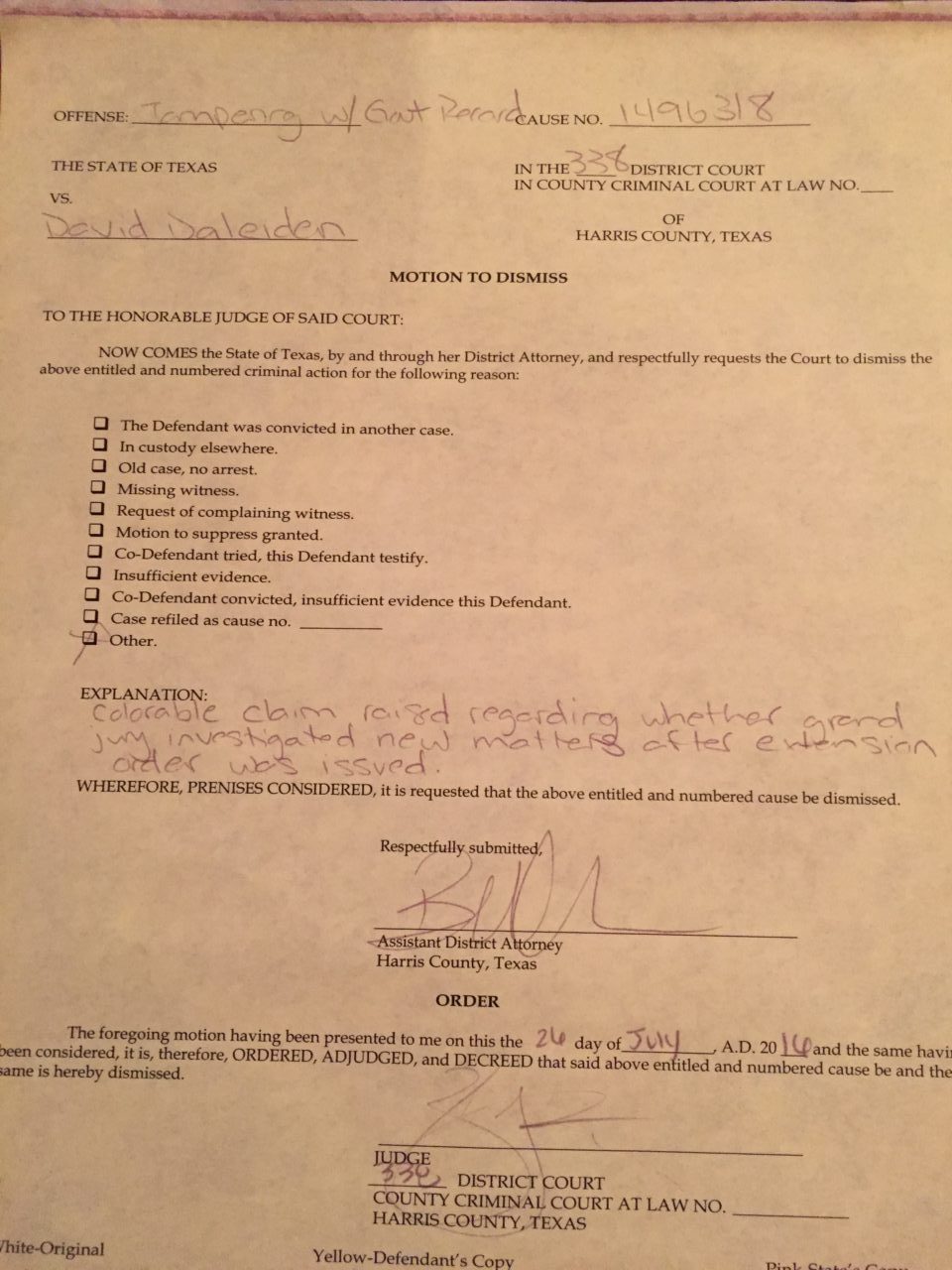 A spokesperson for Daleiden released a written statement to Breitbart Texas shortly after the dismissal:

“The dismissal of the bogus, politically motivated charges against CMP project lead David Daleiden and investigator Sandra Merritt is a resounding vindication of the First Amendment rights of all citizen journalists, and also a clear warning to any of Planned Parenthood’s political cronies who would attack whistleblowers to protect Planned Parenthood from scrutiny. Planned Parenthood tried to collude with public officials to manipulate the legal process to their own benefit, and they failed. A year after the release of the undercover videos, the ongoing nationwide investigation of Planned Parenthood by the House Select Investigative Panel makes clear that Planned Parenthood is the guilty party in the harvesting and trafficking of baby body parts for profit.”

As reported by Breitbart Texas on June 14, one of the charges against the pro-life Planned Parenthood video maker was dropped. Lawyers for David Daleiden provided Breitbart Texas with a copy of the order from the Harris County criminal court judge dismissing the Class A misdemeanor charge for prohibition of the purchase and sale of human organs.

The exception provides that “It is an exception to the application of this section that the valuable consideration is: (1) a fee paid to a physician or to other medical personnel for services rendered in the usual course of medical practice or a fee paid for hospital or other clinical services; (2) reimbursement of legal or medical expenses incurred for the benefit of the ultimate receiver of the organ; or (3) reimbursement of expenses of travel, housing, and lost wages incurred by the donor of a human organ in connection with the donation of the organ.”

Breitbart Texas has reported extensively about the defensive motions, and the charges filed in Harris County against Daleiden and Sandra (Susan) Merritt. The pair took undercover videos while at Planned Parenthood Gulf Coast (PPGC), the mega-abortion mill in Houston. The videos seek to expose the illegal selling of aborted baby body parts.

As reported by Breitbart Texas in mid-April, Daleiden’s lawyers filed motions to quash his indictments urging that the Planned Parenthood lawyer, Josh Schaffer, boasted during a press conference that prosecutors maintained a “dialogue” with him “throughout” the grand jury proceedings and told him that the grand jury’s focus later “shifted” to Daleiden. Schaffer admits in his affidavit that he told the prosecutor that he believed Daleiden and Merritt had broken the law for felony tampering with a government document and that Daleiden had committed a crime by offering to buy fetal tissue.

Daleiden’s lawyers also urged that Schaffer boasted that the grand jury never even took a vote on whether or not to indict Planned Parenthood Gulf Coast, nor did they call a single witness from PPGC before the grand jury.

In addition, Daleiden’s lawyers urged that District Attorney Devon Anderson did not follow the law when she told Planned Parenthood and National Abortion Federation lawyers that Daleiden and Merritt had been indicted by a grand jury. The move by the DA to tell abortion mill lawyers of the indictments at that point has been called by defense lawyers “an unusual move.” The response to Daleiden’s motions filed by the DA admits that her office did not follow the Texas Code of Criminal Procedure but said that the oversight was a technical violation that cannot serve as a basis for quashing the indictments. The DA’s response is attached to the Breitbart Texas article.

Daleiden’s lawyers also asserted that the grand jury that indicted Daleiden and Merritt, was without proper authority to issue the indictments because the order holding them over to a new term lacked the legal requirements. In the State’s written response, the DA argued that the law allows a judge to extend a grand jury beyond its term if the grand jury is investigating matters already before it. Moreover, making the request even more specific by naming the individual or case being investigated would violate grand jury secrecy.

Breitbart News reported on August 4, 2015, that “A video just released by the Center for Medical Progress taken undercover in Texas shows a Planned Parenthood research director discussing the sale of whole intact aborted babies to a company that resells them to medical researchers.” The video was of Planned Parenthood Gulf Coast’s Director of Research Melissa Farrell. One of the claims that Farrell makes on the tape is that PPGC in Houston has more revenue from research proceeds than all the other Planned Parenthood facilities combined.

There have been no indictments against Planned Parenthood Gulf Coast by the Harris County grand jury. The grand jury instead indicted Daleiden and Merritt for felony tampering with a government record. Daleiden was also indicted for the misdemeanor charge of offering to buy fetal tissue.

The indictments of Daleiden and Merritt surprised pro-life advocates who expected that an investigation of Planned Parenthood Gulf Coast in Houston would result in criminal action against Planned Parenthood executives for selling baby body parts. Anti-abortion activists started a petition drive that asked Harris County District Attorney Devon Anderson to drop the charges.