A collection of Louisiana residents equipped with smartphone apps and personal watercrafts have built an auxiliary force to help local law enforcement perform recovery and supply runs to neighbors in need amid historic floods.

Organizers say that the “Cajun Navy” grew out of a natural need to provide additional manpower to local first responders trying to keep pace with calls for rescue of people and animals beginning on August 13. The all-volunteer force pays out of pocket to provide communication devices and appropriate transportation, often spending days at a time on the water performing recoveries. Within the social media chatter promoting the Navy’s services comes a clear motto: “We don’t wait for the help, we are the help.”

Rob Gaudet, a Baton Rouge-based point man for the effort told Breitbart Texas that there was a necessary period of adjustment and organizing coming out of the weekend. The Cajun Navy uses a combination of smartphone apps to geolocate flood victims stranded in need of removal or fresh supplies — coordinated by a central dispatch system that communicates over a digital CB radio-styled platform called Zello. Each rescue crew keeps a local law enforcement officer on board to better maintain lines of authority. An example of the volunteers’ radio traffic was recently recorded and uploaded to YouTube.

The official Facebook page for the Cajun Navy explicitly encourages residents in distress to not contact the volunteers first when in need. Gaudet says that all attempts to connect with local law enforcement should be made before reaching out direct to the Navy via social media.

For an effort only days old, Gaudet is happy to share results. The Cajun Navy currently maintains active operations in Ascension, Livingston, East Baton Rouge, St. John the Baptist and is expanding into Lafayette Parishes.

“We dispatched about 350 boats on [August 16] and we’ve saved thousands,” Gaudet said. “We had one guy bring about a thousand back to the shore on his own. Our guys are out until 1 am sometimes, well after curfew helping people.” Volunteer boaters are typically directed to avoid areas where bodies may be found, leaving those for local officials. 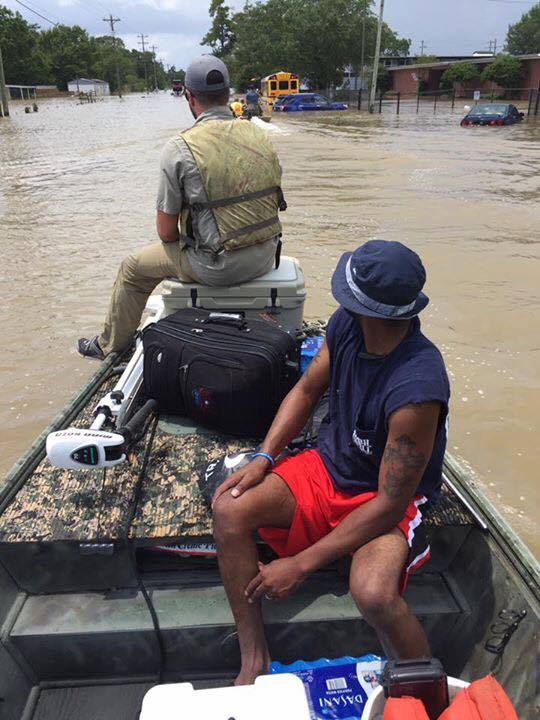 Not all residents stranded by the floodwaters are always happy to see the Navy in their neighborhood, however.

“Some of the people that stay behind will shoot at boaters, thinking they’re looters coming for their TV or something,” Gaudet added. The volunteers are told to maintain very low speeds to not create wakes pushing more water into homes. The effort does not currently have a uniform way of identifying themselves to communities they operate in at the moment and rely on word-of-mouth to reassure the public that their intentions are humanitarian only.

The Cajun Navy asks that people not donate supplies or monies directly to their cause, but instead give to groups listed with the Louisiana Voluntary Organizations Active in Disasters.

“Go through the established channels and don’t use us for [donations]. We’re not logistically capable of handling that right now – our focus is recovery.”