A Baylor University football player is facing disciplinary action after a graphic video emerged showing him beating and kicking a yelping dog. A fellow player videoed the assault and put it on social media.

Baylor wide receiver Ishmael Zamora, now faces a misdemeanor charge of animal cruelty after a video emerged showing the third-year sophomore beating his dog with a belt and kicking the dog while yelling at it. He claimed later that he was angry with the dog over a potty training incident, Noel Smart reported for KXXV ABC25 in Waco. The incident was reported after a video on a fellow player’s Snapchat account was seen by a woman who was appalled at Zamora’s behavior.

Former Baylor student Shelby Ball told Smart, “I went to authorities probably about two hours after I saw the video. Dogs can’t speak for themselves … I felt like something needed to be done.”

Documents obtained by the Waco Police Department by Smart showed that Ball initially went to the animal control department and then to police. The documents also reveal the Baylor Athletic Department was aware of the incident.

Zamora is a third-year sophomore, having “red-shirted” his first year to maintain eligibility for a longer period of time. He is listed as a 2013 graduate of Elsik High School in Houston’s Alief area. As a senior at Elsik, he won the state 2013 Class 5A state championship in the 110-meter hurdles. He also came in second at state in the 300-meter hurdles.

Baylor’s website shows that Zamora is listed to be the starting wide receiver for the team after an outstanding performance during his freshman season. As a redshirted freshman, he played in all thirteen games, had nine receptions for 132 yards and scored two touchdowns. 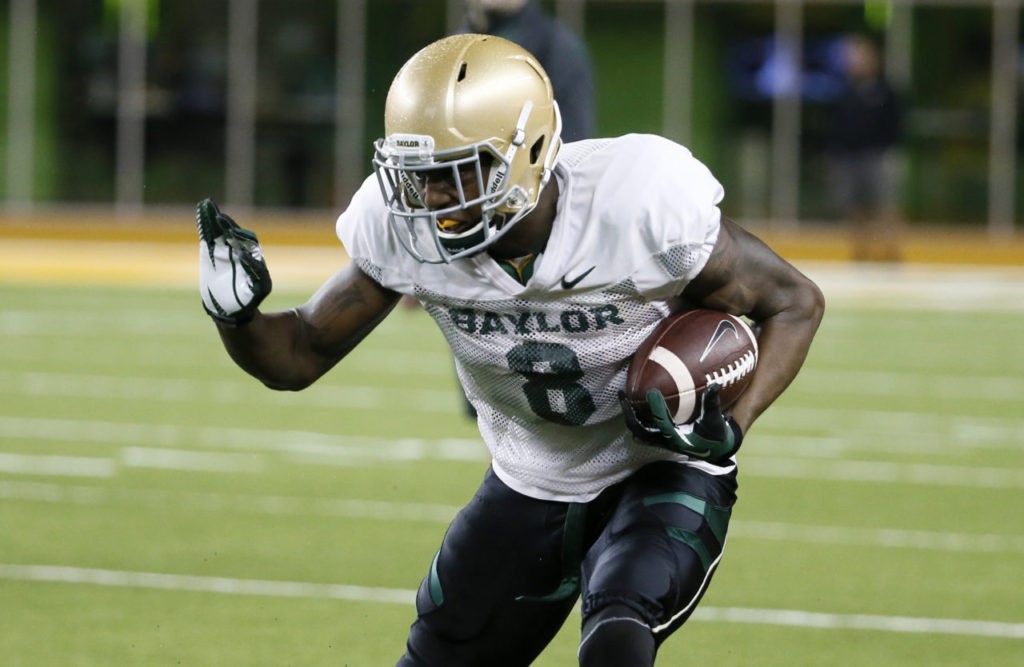 In addition to the Class C misdemeanor criminal citation where he could be fined $500, Zamora now faces discipline from a football program that is already scandal-plagued. The team’s new head coach is Jim Grobe.

Baylor appointed Grobe to the head coaching position in May after Coach Art Briles was fired following accusations he did not respond or inappropriately handled allegations of sexual assault by his football players, Breitbart News reported. The scandal also led to the departure of the university’s president, Kenneth Starr, Breitbart News reported in May.

Grobe previously served as the winningest coach in the history of Wake Forest University. He tied with former coach D.C. “Peahead” Walker with the most number of victories at 77. In 2006, the Associated Press named Grobe the National Coach of the Year, Breitbart News reported.

Grobe told the Waco Tribune Herald’s John Werner that Zamora will face discipline from the team. “We’re not going to tolerate it,” Grobe told the local news outlet. “He’s going to be disciplined by a bunch of people. The city is going to get a piece of him, and the university doesn’t take it lightly. There will be some sanctions from the university. From an athletic department standpoint we’ll do some things. Hopefully, it’s a teaching moment and a learning experience for him.”

As for Zamora, the 20-year-old said he became frustrated over a house training incident. “I’m sorry for my actions,” Zamora said in a written statement on Friday. “I’ve owned the dog for 20 months, he’s perfectly healthy and I love him very much. In the moment, I lost my temper trying to discipline him. I’ve been through training with a dog trainer to help me learn new potty training tips.”

Coach Grobe said “He was just frustrated and spanked his dog for not being house trained. You just can’t do that. He knows that. He loves the dog and takes great care of the dog. Other than losing his temper with the dog, I think he’s taking pretty good care of it.”

In 2014, in a guidebook for Criminal Justice professionals entitled, “The Link between Violence to Animals and People,” former prosecutor Allie Phillips wrote a 71-page treatise on the correlation between violence perpetrated on animals and violent acts against people. The essay was published by the National District Attorneys Association and it has been attached below.

Her lengthy and thorough treatise sets out the following correlations between violence against animals and people in the Foreward section of the document:

Understanding the Link between Violence to Animals and People