A registered sex offender in North Carolina has been arrested after a 6-year-old girl was found chained to a tree. The girl was found safe after being abducted from her home on Wednesday night.

Steffany Lenneth Lopez-Castro was found chained to a tree Thursday morning, officials in New Hanover County, North Carolina, reported. She is said to be doing well, according to KTLA 5. 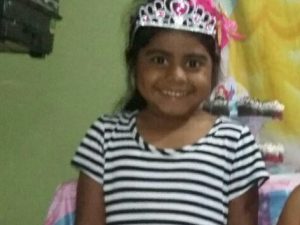 Law enforcement officials have taken Douglas Edwards, 46, a North Carolina registered sex offender, into custody in connection with the kidnapping of the little girl. He was charged with first-degree kidnapping. He had previously been placed on the sex offender registry following a 1996 conviction of a first-degree sexual offense and indecent liberties with a minor. The victim in the 1996 case was also 6-years-old at the time of the attack.

New Hanover County Sheriff Ed McMahon said his deputies kept Edwards under surveillance overnight and made the arrest this morning. No information was disclosed about the location of the arrest.

The family of the little girl issued a statement from the hospital and thanked those involved in helping find the missing girl.

“We would first and foremost like to thank God, the police department, sheriff’s department and all the community that went out to search for her in the rain and on their own time,” Lopez-Castro’s family said in a statement read by Sheriff McMahon. “Thank you to our neighbors and friends and St. Mary’s church who were praying for her, and any others that were praying for her.”

An Amber alert was issued Wednesday evening after the girl was discovered missing, WWAY TV3 reported. She was eventually found safely in a heavily wooded area about two-miles from her home.

A witness reported to be involved in the search for Steffany said the girl was found chained to a tree. The man said he was flagged down by authorities who asked if he had any bolt cutters. He did not, but provided a battery-powered say that rescuers were able to use to free her from the tree. He said when he arrived at the scene, Steffany was laying on her back and appeared quiet and calm.

An emotional Sheriff McMahon expressed, “I think you can say we beat the odds today.” He teared up during a press conference where he mentioned how personal an attack like this can be to officers. “I have a granddaughter that age. It’s personal when this happens in our community.”

Edwards will make his first court appearance later this week. More information about the case is expected at that time.