HOUSTON, Texas — A shooter has been shot and killed after multiple people were shot in southwest Houston early Monday morning.

Update: 11:05: The shooting appears at this time to be the actions of a disgruntled man and not terrorist related. Key points:

Update 10:55: Breitbart Texas spoke with Houston attorney Earl Spielman who said he knew Daniel DeSai. Spielman said  he knew the man socially and would occasionally run into him in the courthouse. “I don’t get it,” Spielman said. “DeSai was the friendliest, nicest person you can imagine. Not for a minute, would I think he was capable of this.” He said DeSai would play cards with other attorneys he knows.

Spielman said he last saw DeSai in the tunnels of downtown Houston that connect the Harris County Courthouses. He said DeSai practiced criminal and family law. He seemed fine and friendly as always during that encountered. He described DeSai as “a nice young man with no wife or children.”

“I’m sure politics had nothing to do with this,” the Houston attorney said. He also said, “You never know what is in someone’s mind.” He said DeSai did not seem to be actively involved in any particular religion. DeSai is a common Indian name.

Spielman is a principal at the Spielman and Associates law firm.

Update 10:42: Houston police have lifted the shelter in place order.

Shelter in place has been lifted for the area of Bissonnet/Weslayan; Anyone with info please contact HPD Homicide 713-308-3600 #hounews

Update 10:45: Raw video shot by witness to the Houston shooting rampage. Multiple gunshots can be heard in the video.

Update 10:20: ABC13’s Miya Shaw reported she spoke with DeSai’s father. She said the father told her he has not been able to reach his son this morning. He said his son owns multiple guns and has a Texas License to Carry. He said his son has been upset at the failure of the law firm. County records show DeSai has not filed any cases on behalf of clients in 2016.

Update 10:15: Photo of man reported to be the deceased shooter. 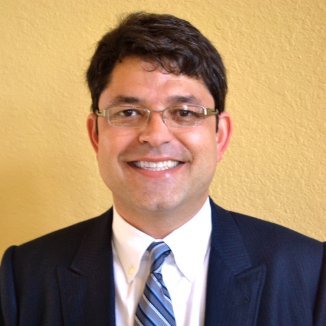 Update 10:10: One comment about DeSai and his legal practice on Yelp* from 2014 was not flattering. Yelp* user Rhi Marie P. said she felt he was very unprofessional when she went to him for a consultation.

I don’t understand why I was charged so much money for them to simply tell me, Sorry, we can’t help you. Besides that, Nathan Desai acted very unprofessional by asking me (a paying client) out for dinner and drinks.

Update 10:05: Fox 26’s Melissa Wilson in Houston is reporting the shooter’s identity as Nathan DeSai, a Houston attorney. Breitbart Texas spoke with Houston attorney Ken McDaniel. He confirmed that DeSai was his law partner and that their law firm dissolved within the past year. McDaniel would not discuss any further information about DeSai. He said he was getting a lot of phone calls from people about DeSai. Breitbart Texas also confirmed the Porsche Boxter is registered to DeSai on Law St. where the shooting took place.

Update 10:03: ABC13 reported there had been a previous incident at the apartment with the shooter where he was angry about a situation involving the roof of his building. He allegedly came outside with a gun and threatened people according to the witnesses. No information was available as to if a police report was filed. The shooter does not appear to have a criminal record in Harris County (Houston).

Update 10:00: Bomb Squad officers are now being seen searching inside the shooters Porsche Boxter. They are searching the trunk and inside the driver’s side seat.

Update 9:49: Witness Jennifer Molleda whose husband was shot said she was looking out window and heard bullets go by closely. She said shooter had a red laser on his rifle. People said they could see the red laser in their eyes. The witness said the shooter was aiming at people’s faces in their cars shooting through the windshield on the drivers side.

Her husband is reportedly okay but was shot. When he was shot, he lost control of his car and drove over curbs into the pet store parking lot. He eventually received medical attention and was transported. “I’m hit, I’m hit,” her husband told her on the phone shortly after he was shot. He is currently at Methodist Hospital. He has glass from the windshield in his eyes. She said he was shot twice in the face. A

HPD Chief Martha Montalvo: 6:29 received active shooter call. Police from multiple agencies responded. Shooter was located in 4400 block of Law St. Suspect shot at police. Police returned fire and killed him. His vehicle was located and multiple weapons were found in the car. No evidence of a second shooter.

One victim is in critical condition, one in serious condition.

Suspect is a lawyer and the chief said there were issues related to his law firm. She confirmed he lives in the neighborhood.

Chief Montalvo would not confirm the victim’s identity. She said the shooter stayed in the immediate area where he was killed.

She would not confirm if the shooter is a terrorist.

The chief reported that nine people in total were shot. Six were transported. Three were treated at the scene.

A reporter asked if the shooter was wearing WWII style body armor. She would not confirm.

Update 9:01: Live video from ABC13 just showed police tying a rope to what appears to be the shooter’s body and then rolling his body down the hill towards the street in an apparent attempt to see if his body is booby-trapped.

Update 9:00: Interview with young boy who heard the shooting. Interview by ABC13:

Boy woken up by gunshots in SW Houston, rushed to safety – ‘My mom was really scared’ https://t.co/uLwgvEDlxx #abc13 #hounews pic.twitter.com/aLGXYj7Nmn

Update 8:46: HPD tweeted a confirmation that the shooter is dead.

Update 8:45: Standing by for press conference from the Houston Police Department.

ABC Videographer Jaime Zamora told his reporters he set up behind a pillar in the shopping center. “The shots were coming by. It sounded like a high powered rifle.” He said he heard 30-40 shots and then it went quiet. “Law enforcement seemed to be a littler calmer. We assumed he had been neutralized at that point.” He said, “I can’t believe I drove into the middle of a shootout.”

Update 8:40: Texas Governor Greg Abbott tweeted, “Please join me in keeping the victims of the shooting in Houston this morning in your thoughts and prayers.”

Please join me in keeping the victims of the shooting in Houston this morning in your thoughts and prayers https://t.co/lxRQXOjSgq

Update 8:35: Another witness told ABC’s Steve Campion that his children were in his car and he was in his driveway when he heard 5 shot ring out. He said he jumped in his car and drove off quickly, but unfortunately he drove towards the gunfire. His neighbor, referenced in main story below, stopped him and told him to go back. He said his departure was delayed by three or four minutes because his son couldn’t find his shoes. Otherwise, he said, he might have been right in the middle of the gunfire. He expressed gratitude to his neighbor for stopping him.

Update 8:31: Houston Fire Department has confirmed the suspect is dead. Houston Police are reporting their bomb squad is on the scene to check the shooter’s car. A shelter in place has been issued for the immediate area because of the possible bomb threat.

Our bomb squad will be checking suspect’s vehicle. Crime scene covers a multiple block area near Weslayan at Bissonnet.#hounews

Update 8:30: A local attorney told reporters his son was one of the shooting victims. He was shot in the arm after a bullet penetrated the driver’s door of his car. He was taken to the hospital, but is not in danger. Following is a photo of his car (white car in surrounded by fire department equipment. 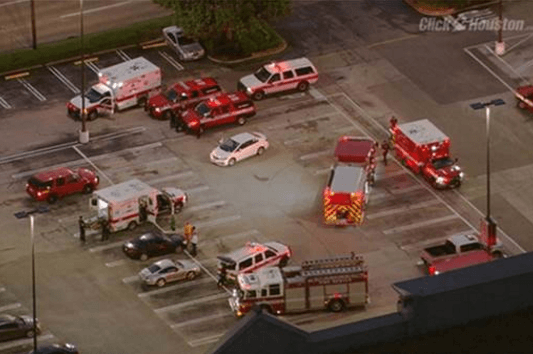 Update 8:25: One ABC reporter arrived on the scene early and actually heard shots go by their location. The shooter appeared to be shooting randomly at any target of opportunity.

Update 8:20: KTRK is now reporting the shooting began in the shooters apartment located behind the Randall’s store. He then left and went out into the street.

Police are reporting that seven people have been shot in an active shooter situation, according to a live report by KTRK ABC13.  The shooting took place near a pet shop located in a Randall’s Grocery Store shopping center on Weslayan and Bissonnet. The area is a very affluent part of Houston. The shooting began at about 6:25 a.m. in an apartment complex behind the Randall’s.

No description of the shooter has been given.

Houston Fire Department spokesman Richard Mann told KTRK that six patients have been transported to area hospitals. He said that most were superficial wounds. Some were injured more seriously. The victims were shot while inside their vehicles.

He said the shooter was not transported by ambulance and is being checked for explosive devices.

One witness told the local ABC affiliate he heard over 100 gunshots that appeared to come from a rifle. “I know my guns,” the man said. He said he saw two people and one police officer on the ground.

One local resident came out of his home in his bathrobe and stopped cars from going down the street towards the shooter. While he was directing drivers away from the danger he heard one bullet “wiz by.” He took cover after that. He said that one vehicle approached him. He told the woman to leave because of the shooting. She said, “I have been shot. I am going home.” He said there were bullet holes in the windshield of her car.